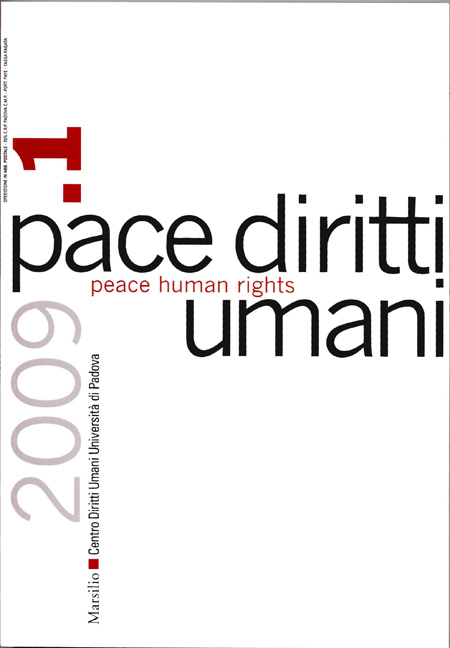 Controversial Boundaries: Thinking over the Debate on Combating Trafficking for the Purpose of Sexual Exploitation, Public Policies on Prostitution and Human Rights in the European Scenario

The phenomenon of prostitution – both jointly intended of foreign and local origin – has been characterised in recent decades as a complex and multifaceted situation defined by rapid extensive changes. The features of the different segments that made up it, their qualitative and quantitative composition, the places and areas of prostitution activities, the presence of forms of real autonomy and independence of women next to situations defined by serious forms of exploitation and subjection, contribute to create plural and complex situations in the prostitution markets. For these reasons, the understanding of this phenomenon, of the multiple undercurrents and articulations, and especially its governance in the different contexts, represent today a critical area of concerns, in other words, issues difficult to define for the multiplicity of situations and the different needs and realities of the persons involved. Prostitution is always a social fact of absolute importance at a symbolic as well as factual level, that concerns and invests different dimensions such as law, morality, economics, relationships between men and women, and today more and more explicitly and frequently, especially in the public debate, the issue of irregular migration with reference to foreign prostitutes and the problem of organised crime. And, in this regard, a growing number of European governments are considering and adopting new regulatory policies systems on prostitution and new law instruments on trafficking in human beings for the purpose of sexual exploitation. Trafficking in persons for sexual exploitation, but also significant segments among persons that offer sex services within sex business and in specific in the prostitution markets, are indeed inextricably linked to transnational migrations and more generally to economic, political andcultural processes that globalisation has triggered at global level in the past two decades. The paper deals with the debate on trafficking for sexual exploitation, prostitution and human rights with particular reference to two specific reports produced respectively by Sigma Huda, Special Rapporteur on the human rights aspects of the victims of trafficking in persons, especially women and children of the United Nations Commission for Human Rights in 2006 and Leo Platvoet, Rapporteur of the Council of Europe Parliamentary Assembly in 2007.