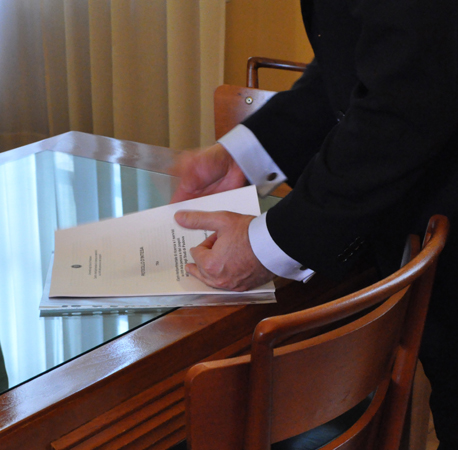 On Monday 21 June 2010, with the signing of a Memorandum of understanding between the Interdepartmental Centre on Human Rights and the Rights of Peoples and the national Coordinating body of the Ombudsmen, the activity of the Italian Institute of the Ombudsman has ufficially started. The Institute will promote studies and initiatives about the role of ombudsmen and human rights, also in cooperation with national, European and international insititutions that deal with the same themes.

The Institute is based at the Interdepartmental Centre on Human Rights and the Rights of People of the University of Padua, which has been committed with an intense activity in this field so far.

The activity of the Institute will be directed by a scientific Committee constituted by preeminent personalities in the field of the ombudsman and university research, whose components will be selected in the next weeks by the organisers.

The Insitute will allow to increase knowledge and effectiveness of the activity of the Ombudsman in Italy, which is the only European country without a national system for the non-judicial protection of human rights (such ad the national Ombudsman and the national Commission for human rights).

Recently, on the contrary, the presence over the territory of these institutions has been weakened by the progressive abolition of municipal ombudsmen.

The Memorandum has been signed at the “Palazzo del Bo” of the University of Padua, by the Director of the Interdepartmental Centre on Human Rights and Rights of People, prof. Marco Mascia, and the national Coordinator of the Ombudsmen, Samuele Animali, who is also the regional Ombudsman of the Region of the Marche.