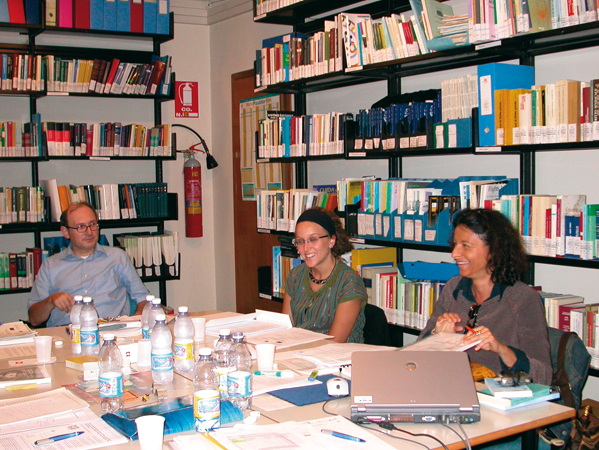 Since its foundation, the main purpose of the Human Rights Centre and of UNESCO Chair Human Rights, Democracy and Peace’s research activity has been to contribute to the in-depth analysis and the dissemination of the culture of human rights.

Research starts from the premise that "human rights knowledge" is a peace-, values- and action-oriented and constitutionally interdisciplinary and multidisciplinary knowledge, which intends to develop peace as a work of justice, not only among persons, peoples and groups, but also among particular areas of knowledge.

What follows is a list of the major projects carried out by the Centre since 1982:

Information and attachments about the projects are available in Italian. Accessing the Italian page of Current Research Projects you are leaving the English version of the website

Trafficked and  Exploited Minors between Vulnerability and Illegality. Forced criminal activities as a new form of exploitation in human trafficking: knowledge and human rights based  practices (TEMVI)

The Italian Foreign Policy in front of the new challenges of the international system: actors, institutions and policies (PRIN-PEI)

The Ombudsman in the Regions, the Provinces and the Municipalities as a non-judicial instrument for the protection of human rights

Information and attachments about the projects are available in Italian. By accessing the Italian page of Completed Research Projects, you are leaving the English version of the website

STOP FOR-BEG AgainST emerging fOrms of trafficking in Italy: exPloited immigrants in the international phenomenon of FORced BEGgging

Strengthening and Democratizing the United Nations

Human Rights and Trafficking in Women and Young People. An Educational Toolkit for Teachers and Students

The Role of intercultural dialogue for the development of a new (plural, democratic) citizenship (2005-2007)

The Ombudsman and Human Rights

Rights of the Children

Problems of the “New” World Order

Information and attachments about these documents are available in Italian. By accessing the Italian page of the documents elaborated by the Centre you are leaving the English version of the website

Peace is not its Name but what it Does: The Political Agenda of Human Rights
Document presented by the Director and the Deputy Director of the Centre to the 7 Peoples' United Nations Assembly (ONU dei Popoli), 2007

Preliminary Reflection of a feasability study for the establishment of the the Peace Civil Corp in Italy. The Primacy Role of Human Rights, Non-violence and the Politics Aimed at Conflict Prevention and Resolution
Antonio Papisca, Director of the Human Rights Centre and UNESCO Chair “Human Rights, Democracy and Peace”. Documents prepared for the Italian Ministry of Foreign Affairs, June 2007

Final Declaration adopted at the International Conference on the Role of intercultural dialogue for the development of a new (plural, democratic) citizenship
University of Padova, Aula Magna ‘Galileo Galilei’, 2nd-3rd March 2007.

Global Civil Society to reform and democratize the United Nations
Document presented by Marco Mascia and Antonio Papisca at the national seminar of the Tavola della Pace “Peace a political design”, Perugia, Villa Umbra, 17th, 18th and 19th September 2004 and at the International Seminar “Reclaim our UN”, Padua, 19th-20th November 2004.

For a Legal Peace in the Balkans
University of Padova, 13 April 1999

Appeal for democratizing the UN
Appeal promoted by the Associazione della Pace and elaborated by the Direction of the Human Rights Centre, Rome, September 1992.

Self-determination, human rights, rights of the peoples, rights of the minorities, transnational territories
Document elaborated by the direction of the Human Rights Centre and presente at the General Conference of the Helsinki Citizens’ Assembly, HCA Bratislava, 25 and 29 March 1992.