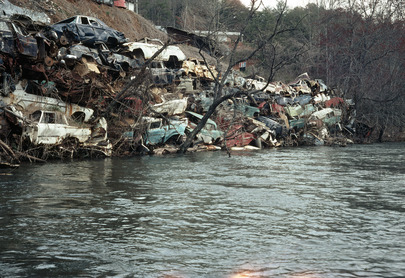 Before offering some conclusions regarding the future of American environmental policy and the prospects of the current administration in this field, it is first worth mentioning the significance of the Obama presidency and the objectives it is laying out for the United States. The twentieth of January, 2009 - the day of Obama's inauguration - is, and should undoubtedly be considered, an important landmark in the history of American environmental policy.  It marked the end of an era in which the attitude of the White House shifted from one that questioned the very fundamentals of global climate change to one that sought effective measures to combat its progression.

The environmental policy of the Bush Administration can, at best, be considered inadequate. The internal discord and inaction that was caused by its refusal to accept even the most basic principles of climate change created serious damage to the effectiveness and integrity of the United States in the environmental arena both at home and abroad.  Even within the EPA, the agency responsible for environmental protection, changes and conflicts persisted throughout the Administrations tenure.  Many top leaders within the agency notably resigned due to the administration’s inaction, as in 2003 when EPA Chief Christine Todd Whitman resigned over an environmental agenda that conflicted with that of the White House. A supporter of the Kyoto Protocol since she assumed her posted in 2001, Whitman had vowed that the United States would "do its own thing" to resolve climate-change issues, but became increasingly disenchanted following the evolution of the administrations' policy away from its campaign promises to crack down on the energy industry. The EPA was reportedly not allowed to publish, or in some cases to research, findings that were in conflict with contemporary government policies. Following Whitman's resignation, the organization itself became notably lax on many former regulations and standards, exempting many industries from accountability and in general steadily loosening its stringent environmental stance. With the change of administrations however, it seems that the EPA is correcting itself under Obama, starting with renovations in January 2010 which will establish new and much stricter smog guidelines to replace the old standards set under the Bush Administration.

Therefore, on a more superficial level, the mere recognition of human involvement in climate change accomplishes much in sending the United States towards becoming a more 'green' society. It establishes the fundamental premise upon which action can be taken - a premise that was far from being realized under the President Bush.  This new attitude, combined with Obama's recent overtures in favour of multilateralism seem to signal that changes are on the horizon in the area of American environmental policy.

What exactly we can expect to see in the upcoming months from Obama, however, is a different story.  Following Copenhagen it can be concluded that the prospects of a successful, binding, international treaty is somewhat limited and the results of the Conference disappointing. With the divide between the European Union and United States beginning to look relatively limited compared to that which lies between them and China, the dream of an international environmental regulations regime is looking to be an increasingly difficult objective. Both Bush and Obama have insisted that the United States will refrain from taking part in any international climate change treaty unless the participation of countries like China is guaranteed. However, inspiring China to take an active role should prove to be an extremely difficult task, as its economic concerns as a newly industrialized nation have and will continue to take precedence in the coming years. An international agreement that would thus be dependent on the cooperation between these two leading economic powers seems to be far from materializing, especially in a time when the United States feels particularly threatened by China’s rapid economic rise.

At the national level, hope for environmental change is also tempered as President Obama’s agenda becomes increasingly busy with issues surrounding the economy, Iraq and Afghanistan, and the reform of the healthcare system. Polls too are showing that according to many Americans those issues are of a higher priority than resolving the problem of climate change, and it is in convincing them of the urgency to act in these uncertain economic times that one would find the most difficulty. Also of concern at the domestic level is the declining popularity of President Obama.  According to a Gallup Pole on the twenty sixth of January, 2010, the number of people who disapproved of Obama’s overall performance were roughly equal to those who approved – 47% to 48% - signalling a sharp decline from the 69% approval ratings he enjoyed at the beginning of his presidency a year earlier.  Such figures could mean that his party might lose seats in the Senate and House of Representatives during the Fall 2010 congressional elections-complicating his ability to successfully enact his policy objectives. Whether or not this will be the case, however, is ultimately irrelevant.  If environmental reform is in any way foreshadowed by the difficulties of the healthcare debate, even with a comfortable majority in congressional seats he will still encounter significant obstacles.

Perhaps the best hope for the environmental movement in the United States in the next few years lays in the choices of both the individual states, citizens, and private companies. States, although themselves experiencing economic difficulties, have a greater chance of success in passing effective environmental legislation due to their more specialized areas of jurisdiction.  Reforms like those passed in California will certainly be possible to replicate in upcoming years if state governments can work closely with local industry and environmental organizations to figure out the solutions that will work in their particular context.  In California already significant connections are being made between economic growth and the development of clean industry – a bond that will hopefully continue to grow throughout the country as the economic incentives of efficiently producing clean energy products will become more apparent.

Therefore, it is important to point out that sweeping environmental change is nothing that can be accomplished immediately.  In the United States, as in any society, the greatest change can be brought about by alterations in the habits and consumption patterns of the average citizen – processes that will ultimately have to evolve over time, as the foundation of American society is in many ways its consumption and surplus of available comforts. Per-capita energy emission in the United States is still exponentially higher than that of any country around the world, and the big question then becomes how to encourage the American people to live a more ‘green’ lifestyle. It has much to improve on, but needs an individual approach, a new solution. It can be suggested that the most effective way for this to be accomplished is through the creation of a culture of awareness, starting with local and state action, that will lead to economic incentives for both citizens and companies to emit less and lead more environmentally sustainable existences. Successful examples can indeed be drawn from past initiatives from local entities like the State of California as well as nation-wide programs such as the ‘Cash for Clunkers’ of 2009-2010.

In conclusion, the environmental solution that will work for the United States will in the end have to be much different than that which will work in Europe-and eventually China-given the differences in lifestyle, culture, and infrastructure. Ultimately, change may work at the local level in the United States order as the most immediate solution and based on individual motivation, separate from the nation’s international concerns. But it also apparent that, in the globalized world, a dialogue of international cooperation and responsibility is necessary and will continue to be seriously valued, as it is fundamentally true that our actions are all interconnected, especially when it comes to environmental issues. Whatever the ultimate solution will be for the United States, and while critiques can and certainly should be offered on the nature and progress of American environmental policy, it is important to frame all suggestions within the proper context – not only for the sake of understanding, but more importantly for the sake of fostering a constructive outcome that will ultimately resolve a problem that affects us all equally.