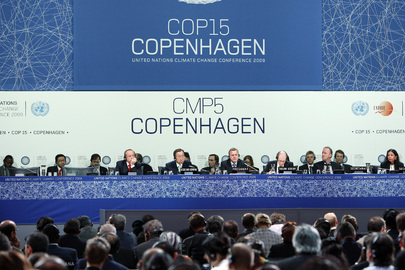 The United Nations Global Conference on Climate Change, held in Copenhagen, Denmark between the 7th and 18th of December 2009, brought climate change and other environmental issues once again to the forefront of the international political arena. As a major follow up to the landmark Kyoto Protocol, due to expire in 2012, the Conference was surrounded by both hopes that an even more successful and expansive international environmental regulation regime could be agreed upon, as well as fears that a failure to take decisive measures would hamper future environmental efforts and risk allowing climate change to digress to dangerous levels.

Perhaps no other factor was as important to this decision as the level of commitment of the United States of America. Up until recently the world’s largest emitter of greenhouse gases and currently one of the largest per-capita emitters, American support is crucial in the engineering of a successful international emissions reduction treaty and the arguably more important establishment of an enforcement regime to ensure compliance on the part of individual states. It is clear that since the 2008 election of Barack Obama, there have been significant changes in American foreign policy towards a renewed interest in multilateralism and international cooperation. Such indications raised expectations for Copenhagen and, at least in theory, the possibility that an effective treaty could be negotiated.

While the steps eventually taken by the Obama Administration in Copenhagen failed to live up to expectations both in Europe and the United States, they are nonetheless significant because they signalled a firm ideological break from the attitudes of the United States under President George W. Bush. In the development of this new point of departure we can perhaps see the biggest possibility for the evolution of a more cooperative and productive American foreign policy in the area of climate change and the environment.

To properly contextualize recent events, the following report will first and foremost seek to catalogue the major developments and policy decisions that shaped environmental politics prior to the Copenhagen Conference and Obama, both within the United States and at the international level. Commentary will then be offered on what we can expect from Obama, the United States, and the international community in the future of policy-making after the relatively unsatisfactory outcome at Copenhagen. Particular attention will be given throughout to the evolution, current status, and possible future of environmental policy-making with respect to the United States and administrations of Presidents Bush and Obama.