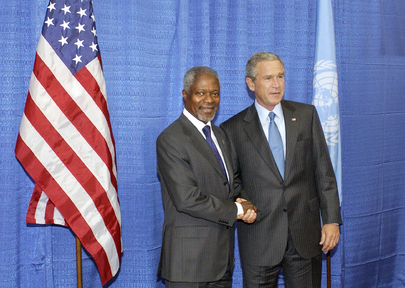 The Clear Skies Act of 2003 & The Bush Administration

American Withdrawal from the Kyoto Protocol

In the time between the adoption of the Kyoto Protocol on 11 December, 1997, and its implementation on 16 February, 2005, the Bush Administration officially refused to ratify the treaty in late March of 2001. The decision was met with worldwide disfavour, including within the United States. As the largest emitter of greenhouse gases in the world, its cooperation and participation was crucial to legitimizing the Kyoto Protocol. With the Byrd-Hagel Resolution in 1997, however, the Senate fundamentally and unanimously voted down the Protocol (and future protocols with similar faults) on principle, for its lack of binding targets for developing countries and for the possible harm it could cause to the American economy. Al Gore signed the treaty in the year after its adoption, which would essentially remain the only symbol of U.S. connection to the Kyoto Protocol, and afterwards it was never brought to the Senate for ratification by the Clinton Administration. After Bush's official announcement not to ratify the document, however, senators like John McCain (Republican-Arizona) and individual cities and states including California, spoke out against the decision and began proposing their own alternatives for taking action in solidarity with the ratified members of the Protocol. When the treaty went into effect, there were 141 countries that had ratified the treaty, among them 35 developed nations, and its global success, at least as a symbolic step forward in international cooperation, was at odds with the blunt refusal of the Bush Administration to accept the Protocol. The Kyoto Protocol had committed the United States to reducing emissions by 7% (from 1990 levels) between 2008-2012, based on the idea that industrialized countries, who were the largest emitters of greenhouse gases, should not only be the first to cut back on emissions but should also make the greatest reductions in emissions. Committing Annex I (industrialized) countries were given emissions targets to reach by 2012 and most agreed to accept their targets, the United States notably excluding itself. Since the Protocol, China has surpassed the United States as the single largest emitter of greenhouse gases, but per capita, the United States sill remains by far the highest emitter.

Bush announced his rejection of the treaty, explaining several reasons for his position. First of all, he believed that the treaty would be harmful to the American economy, costing millions of jobs and billions of US dollars annually. In his public speeches, he acknowledged the problem of American dependence on oil and the need to look for alternative energy sources, but maintained that he did not agree with Kyoto because it committed only industrialized nations to cutting emissions. Along with the Senate, he shared the view that developing countries like China and India, with the growing economic and industrial presence they have, should also share in greenhouse gas emissions cuts. China and India, among other developing nations who ratified the treaty, were not given mandatory restrictions on emissions. In any case, it was a shared belief of the Bush Administration that even if everyone agreed on the Protocol, it may prove to be ineffective, too idealistic for many developed countries to live up to without severely damaging their economies.

Lastly, an important point of dispute with the rest of the Kyoto participants was American insistence in maintaining independence in policy-making. Bush advocated instead for the United States to establish and implement its own specific emissions targets, believing that different solutions were required for the United States, in order to create a policy that was both beneficial to American economic interests as well as the environment.

Currently, the United States is among the few countries that have not ratified the Kyoto Protocol, and is the only country in the world that officially stated that it will not ratify the treaty, which expires in 2012.

Upon rejection of the Kyoto Protocol, former President George W. Bush developed an alternative national environmental policy on July 1, 2002. His Clear Skies Initiative, like the existing Clean Air Act, was a proposal aimed at improving air quality and protecting the ozone layer through regulation of emissions and other harmful substances. Officially called the Clear Skies Act of 2003, it never passed under review by the Senate, becoming deadlocked in Committee. Alongside the Clear Skies Initiative, he also proposed a Global Climate Change Initiative, which outlined a long-term strategy to combat climate change and reduce greenhouse gas emissions, and which pledged funding for environmental research. On the subject of global warming's causes, Bush had stated in several interviews that he believed global warming was real, but advocated further research to find out the true causes of climate change, whether necessarily man-made or natural.

The Clear Skies Initiative proposed certain changes deemed by Bush to be more effective than the Clean Air Act. It called for a national cap-and-trade program for power plant emissions, but did not define the means by which power plants had to maintain those caps. It was intended to reduce cost for energy and energy production, and avoid the need for litigation in complying to environmental caps and regulations. By creating a defined cap for power plant emissions, who would have tradable energy permits for the amount of pollution allowed, Bush argued that it would provide a more concrete and achievable standard and price that everyone could agree on, including energy companies. The Clear Skies Act and Global Climate Change Initiative were the main environmental initiatives that Bush developed during his time in office.

Major criticisms of the Clear Skies Act include the argument that adoption of the legislation would create even more emissions, reducing air pollution control by taking out parts of the Clean Air Act that were more strict, including certain regulations on power plants and caps on toxins. Favouring cost-reduction, under the Clear Skies Act power plants making upgrades would not have to respect new emissions standards if the new upgrades were cost-effective (less than 20% of cost of whole production unit). It was also argued that the legislation would provide more lax on timelines for emissions reductions and a cap for sulphur dioxide, mercury and nitrogenous oxides, but would not have provided a cap for carbon dioxide emissions. Bush was criticized for seeking favour among energy companies with the Clear Skies Act, and many senators opposed the legislation simply because it would be less effective and less stringent than the still-current Clean Air Act. While debate remains strong surrounding the Clear Skies Act, and more significantly, the refusal of the Bush Administration to agree to the provisions of the Kyoto Protocol, it can be undoubtedly concluded that during the Bush Administration the United States failed to take effective and diplomatic measures to combat the issue of climate change, especially on the international stage. His particular inaction and failure to prioritize environmental issues weakened the credibility of his Clear Skies Act, which fundamentally would not take substantial measures to improve the existing Clean Air Act and in effect, bring progress to US environmental policy.

The Encyclopedia of Earth, Kyoto Protocol and the United States