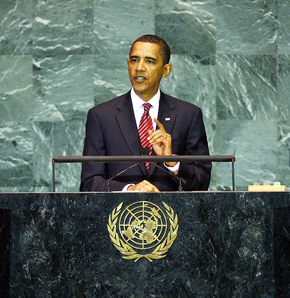 2009: Before the Copenhagen Conference

Barack Obama was inaugurated as President on January 20, 2009, an historical and highly publicized occasion for the United States. From the start of his bid for Presidency, Obama promised an energetic response to environmental issues and climate change problems, and a new direction from former President Bush's environmental stance. Some months before his inauguration, in November 2008, at a meeting convened by Californian Governor Arnold Schwarzenegger and following the 2007 Western Climate Initiative, Obama affirmed his specific climate change goals as a politician and president-elect: reducing CO2 emissions with a target by 2050, reducing dependence on oil, and investing in clean and renewable energy technologies (bio fuel, wind, solar, geothermal) with the result of creating many new jobs in the US. These promises, however, are challenged by the current situation of a United States that is struggling with high unemployment, a national economic crisis that limits financing for these goals, and deepening public concern about pressing issues like the continuing wars in Iraq and Afghanistan.

Since the beginning of his Presidency, Obama has endorsed a cap-and-trade system that would set a price for carbon emissions by auctioning off pollution permits, and put the proceeds towards the protection of wildlife habitat and investment in renewable energy sources. He has advanced many commendable programs and standards, such as committing the Department of Transportation to raising fuel-efficiency standards of Model Year 2011 cars, and asking the EPA to reconsider allowing some states, like California, to set themselves at a standard higher than the national standard, through state and regional initiatives. Finally approved by the EPA, the decision repealed former President Bush's denial of California's request and gave states the right to set their own fuel-efficiency standards.

The differences between Bush and Obama's environmental policies are observable through the reversal of many of the former President's actions, and the Obama Administration has been noticeably more active in tightening standards in many environmental sectors, pushing more progressively towards long-term changes from the foundation up, such as investing in renewable energy sources and increasing fuel-efficiency standards for cars. This can be attributed to the fundamentally different positions Bush and Obama have towards the environment. While Bush advocated further research and was hesitant to even state that he believed global warming is mainly caused by human action, Obama from the beginning has expressed his conviction that global warming is worsened by man-made causes and has consistently supported a great amount of environmental legislation.

From December 7 to December 18, 2009, the United Nations held the 15th Climate Change Conference for the Conference of Parties in Copenhagen, Denmark. The four main considerations stated for COP15, following the Bali Action Plan of COP13, called for:

From the commencement of the Conference, after long-running debate in the weeks prior, a legally-binding agreement was no longer expected at Copenhagen. The ultimate goal of COP15 would've been to create a binding international agreement that would replace the current Kyoto Protocol that expires in 2012. Instead, political leaders in attendance sought to organize a stepping-stone agreement that had elaborated, clear intentions and goals, mitigation, and financial organization, and that would progress international cooperation towards a legal agreement to replace the Kyoto Protocol with as much resounding success and with the crucial inclusion of the United States and leading developing countries. In the weeks up to the Conference, while many European countries in the Kyoto Protocol were found to be on target or even surpassing their accepted goals, countries like the United States and China were hesitant to even produce new emissions targets for the Conference, though they successfully did so before the Conference ended. Having the timely cooperation of the United States and China was one of the greatest difficulties during the Conference, delayed by Obama's visit to China, which did however yield progress in friendlier cooperation between the two countries, including promises of joint research projects on cleaner technology. Nonetheless, the participation of these countries in the Conference was crucial to its legitimacy, not only for international diplomacy and respect for other countries' efforts, but because of their power and influence as leading countries, and as the two countries with the highest emissions of GHG's in the world. This dichotomy and the differences in willingness and efforts made for a frustrating end result for many countries that had made Copenhagen a legitimate priority.

Near the end of COP15, there was a discussion between the leading countries to develop an accord for all participants, a discussion in which Obama took part as a negotiator, the single day he was present at the Conference. It produced the Copenhagen Accord, which establishes 2020 emissions targets for developed countries, and provides short-term financing for poorer countries into 2012 through funding from wealthier countries. Instead of the originally hoped-for binding agreement, it is a temporary conclusion, promising to work towards a globally-cooperative agreement necessary to equally replace the quasi-unanimous Kyoto Protocol. Reaching an agreement at Copenhagen was difficult and drawn-out, but some advancements were also made between developed countries and major developing countries like Brazil and China, who agreed to work towards cutting emissions and recognizing their own contributions to pollution.

Obama's diplomacy in China and Copenhagen was in some ways commendable for progressing friendly relations with developing countries and attempting to push them to work cooperatively with the United States to make active emissions reductions. During the Conference, Obama finally committed the United States to long-term financing towards the UNFCCC's work against climate change. He stated that the US would cut greenhouse gases (though not different from those passed in the House of Representatives) by 17% by 2020 (from 2005 levels), by 30% by 2025, by 42% by 2030, and by 83% by 2050.

Nonetheless, his negotiations abroad were also strongly criticized for lacking clout and clear-cut goals, for not being aggressive enough in addressing issues head-on with China, and for not participating enough in a Conference where he was crucial and where many other countries had made it a priority. These weaknesses, combined with the failure of COP15 to create a binding international agreement, made for an anticlimactic ending to a window of environmental focus and opportunity on the political scene, one that had high hopes set on it. Because his Administration has also neglected to ratify the Kyoto Protocol, in essence finalizing the United States' refusal to participate in the treaty that expires in 2012, Obama instead pledged his cap-and-trade system as an alternative, and looked to the Copenhagen Conference as the next opportunity to create a legally binding environmental agreement. Unfortunately, it is extremely difficult for the United States to pass an international treaty due to the complexity of the procedure and the  number of interested parties who must review and approve it, like the Senate. Furthermore, the Senate is focused on many other priorities, and to even consider passing Obama's climate bill, are looking for economically-competing countries like India and China to make similar sacrifices. It is hoped that at best a comprehensive climate bill may reach the agenda in the Senate to be voted on by Spring 2010. Current issues that have taken precedence over the climate bill include the Affordable Health Care for America Act, the act for national health care reform that was just passed in the House of Representatives. These various balancing acts within and among the countries with the greatest environmental impacts and the most powerful economices, creates a fragile and challenging situation in facilitating cooperation for voluntary, progressive environmental action.

The recently-concluded UN Climate Change Conference in Copenhagen brought to light the necessity of friendly diplomatic relations between developed countries, and developing countries like China, India and Brazil. Ultimately, to make progress towards another binding treaty, the participation of the United States, China, and other economically powerful countries will be necessary. The challenge is to create joint voluntary cooperation on the part of these competing countries. It was Obama's opportunity to bring forth his own goals for climate change and more aggressive environmental policy, and to establish his international presence and personality as a negotiator and world leader in the coming months. As President of the United States, a country that had an integrative role in the outcome of the Conference, his presence was necessary. But, ultimately, there was a great lack of conclusion or meaningful results at the end of Copenhagen, a disappointment for many viewers and participants. Obama refrained from taking any major chances in speech or in action, and the result was unfortunately more of a stalemate, an attempt to maintain friendly relations without ceding any control or making any progressive commitments.