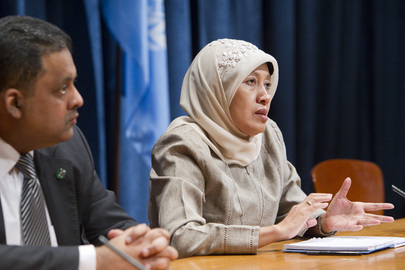 The League of Arab States, not to be confounded with the Organization of Islamic Cooperation

The Organization of Islamic Cooperation (OIC) (formerly Organization of the Islamic Conference) is an inter-governmental organization composed of 57 States spread over four continents: Africa, Asia, Europe, South America. The OIC is "the collective voice of the Muslim world" and works to "safeguard and protect the interests of the Muslim world in the spirit of promoting international peace and harmony". The organization was established in 1969 after a conference which took place in Rabat, Morocco and due to the events related to the Al-Aqsa Mosque in the occupied East Jerusalem.
The present Charter of the Organization, adopted by the Eleventh Islamic Summit in 2008, establishes principles and objectives of the organization as:
-          enhance and consolidate the bonds of fraternity and solidarity among Member States
-          safeguard and protect the common interests and support the legitimate causes of the Member States in view of the challenges faced by the Islamic world
-          reaffirm its support for the rights of peoples as stipulated in the UN Charter and international law
-          exert efforts to achieve sustainable and comprehensive human development and economic well-being in Member States
-          protect and defend the true image of Islam, to combat defamation of Islam and encourage dialogue among civilizations and religions
The main bodies of the Organization are:
-          the Islamic Summit, composed of Kings and Heads of State and Government of Member States: it is the supreme authority of the Organization and takes policy decisions and provide guidance on all issues pertaining to the realization of the objectives
-          The Council of Foreign Ministers considers the means for the implementation of the general policy of the Organization
-          The General Secretariat – the executive body – entrusted with the implementation of the decisions

The Independent Permanent Human Rights Commission (IPHRC) is the principal organ of the OIC in the field of human rights which supports Member States in the promotion and protection of human rights and addresses the “fundamental rights of Muslim minorities and communities in non-member States in conformity with the universally recognized human rights norms and standards and with the added value of Islamic principles of justice and equality”. The “Cairo Declaration on Human Rights in Islam” (see the pin - Cairo Declaration on Human Rights) was adopted by the OIC in 1990.

In 2009 the Secretary General of the OIC, Ekmeleddin Ihsanoglu, and the Secretary General of the Arab League, Amr Moussa, signed the Amended Cooperation Agreement between the Organization of the Islamic Conference and the League of Arab States which reaffirmed the cooperation between the two regional organizations in all fields, particularly the political, informational, economic, cultural, scientific and technical sector, as well as “the field of inter-civilizational dialogue”.