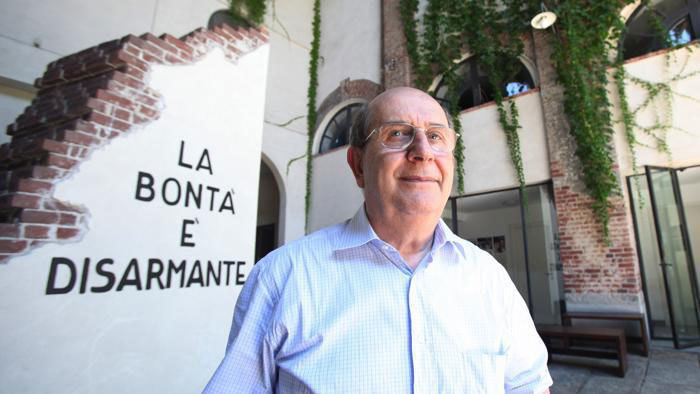 The University of Padua confers an honorary Master's degree in Human Rights and Multi-level Governance to Ernesto Olivero for “the decisive and qualified contribution that he has given to the spread in Italy and in the world of a culture founded on the values of peace, human rights, inclusion and solidarity, as well as education and training of young people for active, democratic and responsible citizenship ".

To him, founder of the Youth Missionary Service, the University recognizes "the merit of a constant, tenacious commitment to living together, dialogue, social inclusion, welcoming the most disadvantaged": his “Sermig” is in fact the fruit of the commitment of Olivero and a group of young people determined to defeat hunger with works of justice, to promote development, to live solidarity with the poorest.

In the 1980s, within Sermig, the Fraternity of Hope was born, which currently has around a hundred members: young people, married couples and families, monks and nuns who dedicate themselves full time to serving the poor and training young people.

Since the 1980s, Ernesto Olivero has been managing the Arsenal of Peace in Turin: "a metropolitan monastery" that provides assistance to immigrants, drug addicts, alcoholics, AIDS patients and homelesses. At this Arsenale, Olivero added the Arsenal of Hope in San Paolo (Brazil) in 1996 and the Arsenal of Meeting in Madaba, Jordan, in 2003.

Professor Marco Mascia, President of the Master’s Degree Course in Human Rights and Multi-level Governance and Director of the Human Rights Center “Antonio Papisca” of the University of Padova affirmed: “the conferment of the honorary degree to dr. Ernesto Olivero constitutes the recognition from the academic world to a person who has spent his whole life defending the supreme value of human dignity and the related principle of equality of all human beings. Dr. Olivero teaches us that human rights are universal, indivisible and interdependent and that the logic of human rights is that of the centrality of the human person, equality, solidarity and inclusion. In a society where violence, racial discrimination and xenophobia, abuse, injustice, poverty, social exclusion and despair are increasing, the commitment of dr. Olivero must be taken as an example not only for the training of young people, but also for all those who are responsible for making decisions at local, national and international level. The University of Padua with the decision to confer the honorary degree to dr. Olivero intends to strengthen its commitment to promote the development of a culture founded on universal values such as human rights, peace, environmental protection and international solidarity, as stated in art. 2 of its Statute".

The ceremony will take place in the Aula Magna of Palazzo Bo on Tuesday 14 May at 10.30.

Participation in the honorary degree awarding ceremony is by invitation only.