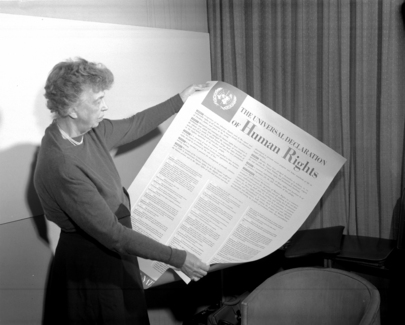 The Charter of the United Nations was adopted after the Second World War to bring together international cooperation to promote universal respect of human rights and fundamental freedoms for all as a main purpose of UN. Ukraine, as one of the founding States of the United Nations, in accordance with art. 55 of the UN Charter undertook these commitments.

To achieve the stated objective, the UN General Assembly adopted the Universal Declaration of Human Rights on 10 December 1948, in which for the first time in history were listed the fundamental rights and freedoms of man. Based on the Universal Declaration and adopted under the aegis of the United Nations, the International Covenant on Economic, Social and Cultural Rights and the International Covenant on Civil and Political Rightswere ratified by Ukraine in 1973. In 1997, Ukraine became a member of the European Convention for the Protection of Human Rights and Fundamental Freedoms. Some other important human rights treaties ratified by Ukraine are: Convention on the Rights of the Child (ratified in 1991); Convention against Torture (ratified in 1987); European Convention for the Prevention of Torture and Inhuman or Degrading Treatment or Punishment (ratified in 1997); European Convention on the Exercise of Children's Rights (ratified in 2006); Council of Europe Convention on Action against Trafficking in Human Beings (ratified in 2010); Convention on Preventing and Combating Violence against Women and Domestic Violence (signed in 2011, not ratified).

The Constitution of Ukraine contains an important statement in art. 22, whereby human and citizens' rights and freedoms affirmed by the fundamental law are not exhaustive. In art. 3 the Constitution of Ukraine recognizes a man, its life and health, honour and dignity, inviolability and safety as the greatest social value. According to article 24 citizens have equal constitutional rights and freedoms and are equal before the law. The second chapter - “Rights, freedoms and duties of man and citizen”- of the Constitution of Ukraine totals almost a third of the overall number of constitutional norms. It consists of 48 articles and contains a wide range of rights and freedoms of mankind which includes all the rights and freedoms that are recognized by the world democratic community as central humanistic standards. Thus, the civil rights include the right to the free development of the personality (art. 23), an inalienable right to life and respect of dignity (art. 27, 28), a right to freedom and bodily security (art. 29), a right to inviolability of habitation (art. 30), a right to privacy of correspondence, telephone talks, telegraph and other correspondence (art. 31). The Constitution states that no one “shall be subject to interference on his or her personal and family life” (art. 32). Everyone is guaranteed the right to freedom of movement, freedom of speech and thoughts and right to freedom of religion (art. 33, 34, 35).

Among the political rights protected by the Constitution of Ukraine, the right to freely associate in political parties and public organizations (art. 36), the right to participate in the administration of state affairs in All-Ukrainian and local referendums, to freely elect and to be elected to bodies of state power and bodies of local self-government (art. 38). Article 39 recognizes the right to hold peaceful demonstrations and meetings, while art. 40 provides the right to appeal to bodies of state power, local self-government, and to the officials and officers of these bodies.

Since the independence of Ukraine, the Verkhovna Rada (the Parliament of Ukraine), the Cabinet of Ministers (the Government) and the President have issued a big number of legislative acts (laws, decrees, resolutions, orders) regarding human rights. The most important are listed below:

The Constitution of Ukraine is an important tool for the protection and promotion of human rights in the Country. It broadly refers to human rights and commits Ukraine to guarantee a good standard of living to its citizens. Furthermore, it enables Ukraine to translate international agreed standards into domestic law, and obligates all branches of Government to respect and ensure the rights it enunciates (art. 3). However, in January 2014, the Ukrainian Parliament approved a package of anti-democratic laws, which clearly limited Ukrainians’ freedom of assembly, speech, and expression. Yet, the anti-protest legislation was repealed on 28 January, 2014.