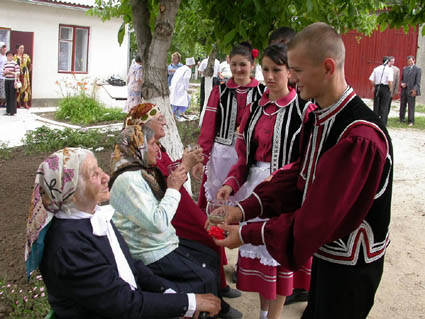 According to Ukrainian legislation, members of all nationalities living in Ukraine are guaranteed equal political, economic, social and cultural rights, i.e. the right to a free development of national minorities. Article 3 of the Law “On National Minorities” states that “to national minorities belong groups of Ukrainian citizens, who are not of Ukrainian nationality, but show feeling of national self-awareness and affinity”. Furthermore, article 11 states that “citizens of Ukraine have the right to a free choice and restoration of their nationality. Compulsion in any form to deny one's nationality is not permitted."

Since 1991, the ethno-national process in legislation has been rather intensive. This is reflected in the adoption of a package of legislative acts including, among others: the Declaration on the Principles of Co-operation between the Hungarian Republic and the Ukrainian Soviet Socialist Republic in the Area of the National Minorities’ Rights (May 1991); the Declaration of the Rights of Nationalities (1 November 1991); the Act of Ukraine on the National Minorities (June 1992); and the Act of Ukraine on Refugees (December 1993). Apart from this, Ukraine ratified the Council of Europe Framework Convention for the Protection of National Minorities on December 9, 1997.

The first cycle of monitoring activities on the issue of minorities rights by the Council of Europe in Ukraine took place during the years 1999-2003. In its report on the implementation of the Framework Convention for the Protection of National Minorities, the Advisory Committee welcomed that in 2002 three governmental programs had been approved to solve problems concerning adaptation and integration of the deported Crimean Tartars and other nationalities into the Ukrainian society.

In September 2007, the Council of Europe Commissioner for Human Rights published a report following a visit to Ukraine. In this report, calls were made for increased protection of minorities. The Commissioner also stressed that racism and xenophobia needed to be addressed. The same concerns were raised by the UN Committee on Economic, Social and Cultural Rights in 5th periodic report on Ukraine in November that year. In the report, concerns were voiced over discrimination and ethnic violence towards ethnic and religious groups, including the Crimean Tatars.

During the 2014 Crimean crisis, the overall security situation in Crimea had been very tense. The Advisory Committee mentioned kidnappings, intimidation and ill-treatment perpetrated by the so-called “self- defense groups”, which constituted an immediate obstacle to the freedom of movement of Crimean residents, including persons belonging to national minorities. To date there are at least 19,000 internally displaced persons (IDPs) who have fled from Crimea mainly to western areas.

Another big concern raised by international monitoring bodies has been the language policy in Ukraine. Ukrainian, which is the national official language, is the native language of 67,5% of Ukraine's population, while Russian is the native language of 29,5% of Ukraine's population and the rest (2%) are native speakers of other languages. Moreover, there are around 40 minority languages and dialects.
In 2012 the Parliament of Ukraine adopted the law "On the principles of the State language policy". The law aimed at giving minority languages the status of "regional languages", provided that the percentage of representatives of national minorities exceeds the 10% of the total population of a defined administrative district. The repeal of such law, occurred on 28 February 2014, resulted in unrests in the regions and let to current tense situation, the OSCE said in its 2014 report on minority rights in Ukraine.

While Ukraine has a well-established network of schools with educational activities in and of minority languages, including Russian, Romanian, Hungarian, Moldovan, Polish and Crimean Tatar, a number of problems affect the quality of education such as the lack of availability of updated quality textbooks in minority languages and training and supply of teachers to teach Ukrainian, the OSCE High Commissioner on National Minorities reported. Some minority representatives also expressed a desire to have a system of proportional representation in executive and public bodies or at least to have positive measures to promote adequate representation.

Notwithstanding the law prohibiting any privileges or restrictions on the basis of race, color, sex, property, religion or any other category, discriminatory actions, such as racist attacks, hate speech, threats and violence targeting national minorities, including Crimean Tatars and Roma, as well as asylum seekers, refugees, immigrants, foreign students and others have been reported. In some cases, these actions are accompanied with arbitrary inspections of identity documents targeting certain minority groups, as well as incidents of police violence or other forms of misconduct towards some vulnerable ethnic groups.

Lastly, according to CoE Advisory Committee, another serious issue of concern is the situation of Roma communities. The relative isolation of the Roma community from the rest of the society has resulted in some prejudice in respect of persons of Roma origin. The First Congress of Roma communities in Ukraine was held in Kiev on 7-8 June 2002.