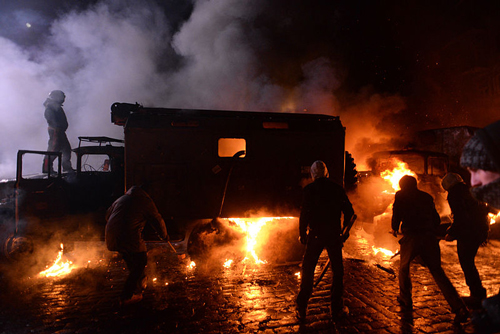 The Ukrainian anti-protest laws are a group of ten laws passed by the Parliament of Ukraine on January 16, 2014 and signed into law by the ex-president Viktor Yanukovych the following day-amid massive anti-government protests that started in November 2013. The laws are also referred as the "dictatorship laws.”

When adopting the laws, the Parliament violated a number of its own procedural rules. The laws were voted mostly by raising of hands, not through the electronic vote as required. The legislation directly violated the basic human rights of all Ukrainian citizens, such as freedom of speech, assembly, press, privacy etc. These anti-democratic measures went further than similar laws in Russia to overcome civic resistance.

The laws banned any unauthorized installation of tents, stages or amplifiers in public places, on pain of a fine of up to $640 or up to 15 days in detention. People and organizations that provided facilities or equipment for such meetings were also liable to a fine of up $1,275 (€937) or detention of up to 10 days. Another bill provided a punishment of one year of corrective labour for slandering government officials, and two years in jail for gathering and disseminating information about the Berkut (the system of special police of the Ukrainian militia, was dissolved after it was found responsible for most of the nearly 100 civilian deaths) judges, or their respective families. Moreover, one of the laws simplified the process of removal of parliamentary immunity during criminal proceedings, which would allow the ruling party to get rid of prominent opposition leaders.

Apart from targeting public protests, the laws were also similar to Russia's one on registration of foreign non-governmental organisations (NGOs), categorising them as "foreign agents" if they are funded from abroad and imposing on them additional taxes.

Here are some other provisions introduce by these laws:

A set of tough laws, criticized as anti-democratic by the western governments, were cancelled by the Parliament on 28 January 2014.