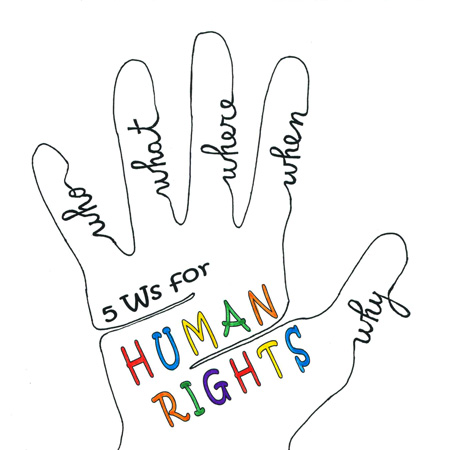 5 Ws for human rights was a weekly rendezvous to talk about and deepen the issues related to human rights from a concrete and everyday perspective.

Each episode included the following columns: "Oggi sul divano" dedicated to suggestions about books, movies and web sites on the topics dealt with during each episode and "Dite sulla tastiera" which introduced the question of the week published on the facebook page "Archivio pace diritti umani" where listeners shared their ideas and opinions.

5 Ws for human rights was edited and anchored by the volunteers of the National Civil Service at the Human Rights Centre of the University of Padova in the framework of the project "Volunteer for editorial work: communicating human rights, developing peace" with the support of the Regional Archive Pace diritti umani- Peace Human Rights"

Signature tune and music is by Yuri Argentino.

The podcasts of all episodes will be on-line at: https://www.radiobue.it/ and on the Centre's website.

Podcasts and transcripts of all episodes
(available here, in Italian, after the broadcasting)

The first episode of 5Ws for Human Rights tries to explain what human rights are not only from a legal perspective, but also from an everyday point of view. For this reason, the starting point is the interview which collects the opinions of common people who shared their ideas answering the question: “What are human rights for you?”

The second episode of 5Ws for Human Rights is dedicated to who is entitled to human rights, who is responsible for their respect, who works to promote them, and to who, on the other hand, violates them. Special attention is paid to civil society organisations committed in promoting and protecting human rights. The interview is to Riccardo Noury, spokeperson of the Italian section of Amnesty International.

The third episode of 5Ws for Human Rights chronicles the most important events of the path that, starting from the Middle Ages, have led to the international legal recognition of human rights. In the interview, Professor Antonio Papisca, UNESCO Chair Human Rights, Democratisation and Peace of the University of Padova, tells us the most important achievements of the Twentieth century.

The fourth episode. Where are human rights protected? (27th March 2012)

The fourth episode of 5Ws for Human Rights is dedicated to the institutional offices responsible for the protection of human rights, in particular international organisations and courts. In the interview, Silvana Arbia, Registrar of the International Criminal Court, describes the role of this important Court, as well as the limits and the achievements obtained during its first ten years of activity.

The fifth episode. Why are human rights so important? (3rd April 2012)

The fifth episode of 5Ws for Human Rights is dedicated to many ‘why’ related to human rights: why are they important? Why consider them as a common pattern to different cultures and religions? Why study them? On these issues, we interview Andrea Cofelice, Master’s Degree in Institutions and Policies of Human Rights and Peace at the University of Padova and PhD candidate at the University of Siena.