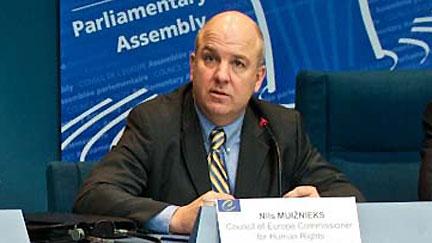 Council of Europe: Nils Muižnieks is the new Commissioner for Human Rights

On 24 January 2012, Nils Muižnieks (Latvia) was elected third Council of Europe Commissioner for Human Rights by the Organisation’s Parliamentary Assembly (PACE) at its plenary session in Strasbourg.

Mr Muižnieks was elected for a non-renewable term of six years starting on 1 April 2012.

Mr Muižnieks obtained 120 of the votes cast in the first round, an absolute majority. Frans Timmermans (Netherlands) obtained 92 votes and Pierre-Yves Monette (Belgium) 27.

From November 2002 to December 2004, Mr Muižnieks held the post of Special Assignments Minister for Social Integration Affairs in the Latvian Government. Since 2005 he has been the member for Latvia of the European Commission against Racism and Intolerance (ECRI) and became its Chairman in January 2010. He is currently Director of the Advanced Social and Political Research Institute (ASPRI) at the Faculty of Social Sciences in Riga.

The Commissioner makes regular visits to the member states to engage in dialogue with governments and civil society and draw up reports on issues falling within his mandate.