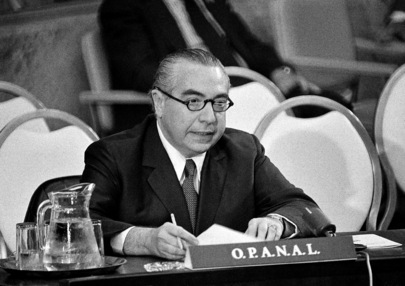 30 November concluded the earthly existence, passionately spent for the cause of human rights in teaching, research and politics, of Hector Gros Espiell, Professor Emeritus of the University of the Republic of Uruguay.

The University of Padua's Interdepartmental Centre on Human Rights and the Rights of Peoples, is honored to have had Mr. Espiell among its staff of professors, and among the members of its first Scientific Committee, instituted in 1983.

Hector Gros Espiell, being in close association with the United Nations, was among the integral authors of the two UN international pacts of 1966, respectively concerning civil and political rights, and economic, social and cultural rights. He also served as the United Nations Special Rapporteur on the Right of Self-determination.

An author of numerous important volumes and articles regarding human rights, Professor Espiell was also appointed to many political positions. Among his various charges, he served as Vice President of the Inter-American Court of Human Rights, Foreign Relations Minister of Uruguay, and Ambassador of the Republic of Uruguay to UNESCO.

Through his writings and political actions, he also fought for the recognition of peace as a fundamental right of all people. An enduring example of this celebrated teacher's dedication to "the right to peace" is published in the first printing of the first issue of "Peace, Rights of Man, Rights of Peoples" in 1988, a quarterly pamphlet published by the Human Rights Center.