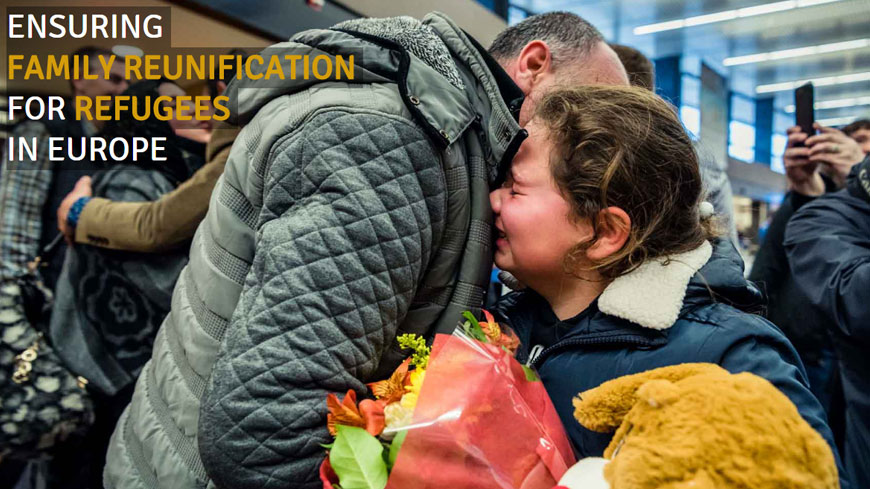 Mariachiara Berlinghieri is a recent graduate from the Master degree in Human Rights and Multilevel Governance at the University of Padua. She is currently enrolled in a Master of second level in Migration law at the University of Bergamo. She discussed her thesis “A cross-country comparison on the right of refugees to family reunification. Eligibility criteria and access of the procedure in Canada, Australia and the United Kingdom” under the supervision of prof. Antoine Meyer.

The family is undeniably one of the most important aspects of people’s lives and the fundamental unit of our society. When families get separated along the routes trying to flee conflict or persecution or stay behind in the country of origin, family reunification often becomes the only safe and legal path for refugees to reunite with their family members. Indeed, according to UNHCR, family unity can have a number of benefits both in terms of physical and mental well-being for family members and in helping reduce the number of spontaneous arrivals when people are often smuggled or put in dangerous situations.

The aim of this work was to analyse the challenges in law and practice to the enjoyment of family reunification for recognised refugees, by looking at eligibility, i.e., the criteria applied to select which family members are eligible to apply, and procedural requirements, i.e., the conditions refugees and family members have to satisfy to reunite. The work was developed on two levels: first, comparing the family reunification processes in place in Canada, Australia and the UK between them and second, confronting their status with international standards.

Understanding whether or not refugees have a right to family reunification was the necessary starting point. International human rights law recognises a universal right to family unity and family life. As art. 16 of the Universal Declaration on Human Rights establishes that “the family is the natural and fundamental group unit of society and is entitled to protection by society and the State”. Similar provisions can be found in art. 17 of the International Covenant on Civil and Political Rights and in art. 23 of the International Covenant on Economic, Social and Cultural Rights, which impose on States not to interfere with one’s family life and to accord it the widest level of protection respectively. On the contrary, the 1951 Refugee Convention is silent on the matter of family reunification and only refers to refugees without any mention of the refugee’s family. The closest reference to a right to family reunion can be found in the Convention on the Rights of the Child, where article 22 establishes that refugee children are entitled to special assistance in the process of reuniting with their family members.

At the regional level, the European Court of Human Rights has recently taken its stance on the preservation of family unity when deciding cases under art. 8 of the European Convention on Human Rights. In one of its latest decisions, the ECtHR ruled that all refugees have a right to family reunification, regardless of whether they have temporary protection or convention status, since, as it was rightly held by the applicant, “the need for family unity should not be dependent on a person’s status, but on the gravity of the obstacles preventing that person from enjoying family life in his or her country of origin”. As art. 8 provides strong protection for family relations and applies a broad notion of family, which also includes de facto family ties, the Court has been willing to consider a wide range of factors in its evaluation, such as the vulnerability and difficult personal history of the applicants, the age of children involved, the level of dependency and the attachment to the host country, which can prove the importance of keeping families together.

Although there are issues to establishing a unified and comprehensive approach to family reunification, the UNHCR has rightly argued that refusing to allow family reunification may result in an interference with the right to family life and family unity, especially when families do not have other possibilities to enjoy such rights elsewhere.

Family members are usually distinguished between nuclear family (i.e. spouse, partner and children), extended family (i.e. parents of adult refugees, uncles and aunts, nephews and nieces) and family members of unaccompanied minors. Each category has its own criteria to determine the eligibility of family members; thus, the most striking findings are explained in the following section.

To start with a positive remark, an encouraging step has been taken by Canada by adopting a broad approach in terms of age dependency for children, allowing them to join their parents up until 22 years of age. In Australia and the UK, on the other hand, children are eligible according to the standard age limit of 18. Two other important aspects to highlight are that Canada and Australia do not allow for family members who were not disclosed in the original residence application of the refugee to join. This policy is based on the presumption that non-disclosure is motivated by the deliberate intention to mislead the authorities. However, it fails to take into account the possible reasons for non-disclosing them, from the refugee not knowing the negative consequences to security issues or simply thinking that the relative had died. Secondly, Australia and the UK have a strict policy of not recognising as nuclear family those who have become family members of a refugee after they left their country of origin. Thus they have to apply as extended family and meet the requirements for that category, while international law does not distinguish between pre and post-flight family members.

Regarding extended family, Canada, Australia and the UK fail to recognise the importance of emotional and psychological dependency between family members, as recommended by the UNHCR, while they focus on physical and economic dependency that is easier to prove, for example, through medical records or bank statements.

A separate situation is that of the family members of unaccompanied minors. Indeed, only Australia allows for minors to sponsor their parents, while Canada and UK lack such provision. In the latter cases, minors have to apply under the “humanitarian and compassionate” circumstances procedure, which means that it is up to the Minister of Interior or the court to decide on the merits of the case. According to the UK government, this policy acts as a deterrent for families from sending “anchor children” to secure refugee status and be joined by family members at a later time. However, restricting the access to family reunification for unaccompanied minors has many negative consequences on their well-being, puts them in greater danger of being exploited or harmed, and fails to recognise the best interest of the child as imposed by international law.

Accessibility of the procedure

As with eligibility criteria, each member of the family willing to reunite may need to go through a different procedure depending on its relationship status with the refugee. Generally, it is more stringent for extended family members. This section, thus, encompasses all of those aspects that are part of the process of applying for family reunification.

One of the first requirements is proving the family relation. The process is simple when refugees are able to show marriage or birth certificates, but often it is impossible for them as these documents are lost on the way to refuge or impossible to retrieve them from the country of origin. Although in such cases, other documentation such as family photos and phone records should be considered enough, very often, DNA testing is required. According to international guidelines and national legislation, this practice should be used as a last resort measure, but in practice, it emerged that officers often ask for a DNA test to get a straightforward result. This kind of approach raises numerous concerns: first, the high cost has to be borne by the applicant, becoming an additional burden; second, there are privacy issues when handling the results as they may end up in the wrong hands; and finally, this procedure has the potential to disrupt family units and have devastating consequences on children and parents who learn they are not blood-related.

In order to be joined by extended family members, refugees must prove to be able to provide for their living expenses and accommodation without burdening national social welfare systems. The income threshold is quite high and increases for each applicant on the application. Fortunately, Canada and UK offer the possibility to combine different sources of income to meet the requirement. Moreover, considering the economic crisis due to the pandemic, Canada has lowered the income requirements for this year.

Australia requires a further step which may raise some criticism. It is the so-called “balance of family test”, which consists in a balance made between the parents and the number of children living in different countries. In other words, to meet this requirement, the parent must have at least half of his/her eligible children in Australia or more eligible children living in Australia than in any other single country. The aim would be to ensure that only those parents with the strongest family ties to the country can apply, but it fails to give primary consideration to the best interest of the child.

Regarding the application submission process, the main issue concerns the fact that family members applicants have to reach embassies or Visa Application Centres for example to submit their application or be interviewed by officers and clarify their status. This becomes a problem because it is an additional cost for the family and because often they have to cross borders or travel long distances to reach the nearest embassy with high security risks, especially for vulnerable categories such as women and children.

Finally, none of the countries provides free legal advice to help refugees fill in their requests comprehensively and without mistakes. Australia and the UK had programmes to support refugees legally in the application process, but in 2013 they stopped funding their legal assistance services. This was a huge drawback since refugees and their families are left on their own to navigate such a complex and long process, as the only alternative is to pay for legal advice.

This research concludes that refugees, like any other person, are entitled to the right to family unity and family life rather than to a specific right to family reunification. States, however, only partially comply with international standards, granting refugee families an uncertain level of protection. Moreover, States tend to apply a narrow and Western-centred definition of family and dependency, considering mainly members related by blood and living in the same household, while they should incorporate a wider network of relationships which are recognised as part of the family in other cultures. Finally, procedural requirements are becoming more and more stringent, and as a result, the process is not accessible to everyone, especially cost-wise.

Given the context, additional efforts should be taken by the governments in cooperation with civil society organisations, which are already working closely with refugees and their family members, to better understand and respond to their needs and difficulties. Indeed, family reunification is a priority for many refugees, but state policies seem to lack a “human” perspective, focusing instead on the mere compliance with requirements.

In such an intricate process, it is important to keep in mind that family reunification has the potential to be both a legal pathway for refugee family members to reach a safe country, and a way for refugees to integrate better in the society, given that they do not have to constantly worry about their families abroad and they receive direct support at home.