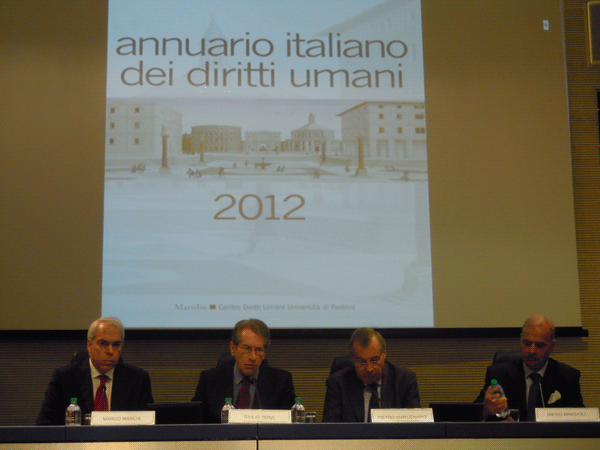 On Thursday 20th September 2012, in front of a large audience, the Italian Yearbook of Human Rights was presented at the headquarters of the Ministry of Foreign Affairs in Rome. The Yearbook is edited by the Human Rights Centre of the University of Padova and published in its Italian version by Marsilio (Venice).

The event was organised by the Italian Inter-Ministerial Committee of human rights in cooperation with the Human Rights Centre of the University of Padova and the Italian Society for the International Organisation (SIOI).

The presentation conference was opened by the Minister of Foreign Affairs Giulio Terzi, who has underlined, among others things, that “each page of the Yearbook is a precious source of useful data both for scholars and practitioners. Through its four parts [“Implementation of international human rights law in Italy”, “The human rights infrastructure in Italy”, “Italy in dialogue with international human rights institutions”, “National and international case-law”] the book offers a comprehensive framework of Italy's action for the protection of fundamental rights, as carried out by the Government, Parliament, civil society and academia”.

The speech delivered by the Minister touched on particularly sensitive topics, including the gross violations of the right to religious freedom. The protection of human rights “must be always at the centre of international relations” because, the Minister added, “human rights have acquired an operative dimension, in light of the tight connection between rights violations and conflicts, mass migrations, the spread of terrorism”.

The Minister concluded the speech by saying “I am deeply grateful to the University of Padova for this new edition of the Italian Yearbook of Human Rights. It is a very useful work tool for those – including workers in this sector, researchers, students – who want to orient themselves in the multiform panorama of the action undertaken by our Country, at all levels, in order to both promote human rights as the international level, and increasingly adapt our system according to international commitments. In this perspective, I consider as particularly interesting the section dedicated to the “Agenda of Human Rights”, that meets significant correspondences with the work plan of the Italian Government. Let me in particular confirm the commitment of the Government, and my personal commitment, for the establishment of an “Independent National Commission” on human rights as required by a Resolution of the UN General Assembly of 1993. As you know, the provision is currently before Parliament. I am actively following the ongoing debate and I hope it will briefly conclude positively, thanks to the constructive contribution of all political forces".

Following the Minister, Senator Pietro Marcenaro, President of the Extraordinary Commission of Human Rights took the floor. The Senator took stock of the latest developments of Parliamentary activity with regards to, in particular, the inclusion of the crime of torture in the Italian criminal code, and the establishment of the National Commission for Human Rights.

Then professor Marco Mascia took the floor in order to express the gratitude of the Human Rights Centre of the University of Padua and to illustrate its more recent activities.

The second part of the conference was introduced by professor Antonio Papisca, Director of the Yearbook, and was dedicated to the description of specific parts of the Yearbook with the contribution of professors Umberto Leanza, Deputy-President of SIOI, Massimo Panebianco, University of Salerno, Ersiliagrazia Spatafora, Agent of the Italian Govenrment at the European Court of Human Rights, of doctor Barbara Terenzi, Coordinator of the Committee for the promotion of human rights made up by more than 80 NGOs, and of doctor Maurizio Caprara, from Il Corriere della Sera.

Three members of the Editing and research committee of the Yearbook - Andrea Cofelice, Pietro de Perini, Claudia Pividori - then spoke about specific aspects of the Yearbook.

During the speeches, the focus was also put on the importance of education and training to human rights and on the need of developing, within the Italian school system, the teaching of “Citizenship and Constitution” centred on the human rights paradigm. The Ministry of University and Research was represented in the audience by professor Simonetta Fichelli, who is the passionate supporter of this programme.

Within the audience, it has been noticed the participation of prominent personalities of the diplomatic and academic worlds, students of SIOI, NGOs representatives and the interesting novelty of “Musicians for Human Rights”.

The Conference was closed by the Minister plenipotentiary Diego Brasioli, President of the Inter-Ministerial Committee of Human Rights, to whom the large audience addressed its warm applause.

Giulio Terzi, Minister of Foreign Affairs
Pietro Marcenaro, President of the Extraordinary Commission for the Protection and Promotion of Human Rights of the Senate
Marco Mascia, Director of the Interdepartmental Centre on Human Rights and the Rights of Peoples, University of Padova

More information are available in Italian. By accessing the Italian page of the seminar, you are leaving the English version of the website.