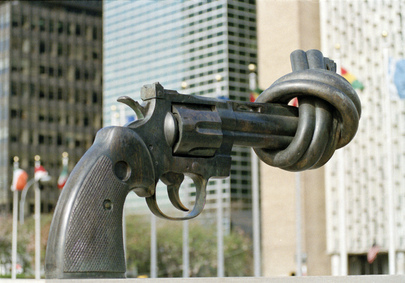 15 December 2012: 40th anniversary of the law on conscientious objection to military service in Italy

Saturday, December 15, 2012 marks the 40th anniversary of the Marcora Law (Law 772/1972) which regulated, for the first time in Italy, the conscientious objection to military service.

The story of one of the anti-war historians, Enzo Bellettato, has been published in order to commemorate this historic result, achieved thanks to decades of civil society's committment to the promotion of the culture of peace and to all those who remained faithful to the repudiation of war, principle established in Article 11 of the Italian Constitution.

“Diario di un obiettore. Strapparsi le stellette nel ‘68", published by Editrice Missionaria Italiana, is a book that relaunches the nonviolent ideal through the story of a young Venetian objector that in 1968, after having teared his insignia, was tried and convicted. The events through which passed Bellettato, Catholic and teacher at the time, however, were not useless. In 1970, the Constitutional Court would have abolished the crime on "apology of conscientious objection", thus paving the way for the gradual recognition of the objection.

Retracing the history of conscientious objection in Italy as a contribution to peace-building, human rights and the non-armed defense of the country, in the book’s introductory essay, Mao Valpiana, president of the Nonviolent Movement, emphasizes the fact that, although the battle for conscientious objection is concluded, contrary to the military apparatus the civil service has become a victim of deep budget cuts.

"I (still) have an objection" is a meeting organised by the Nonviolent Movement and the National Conference of Civil Service Institutions (15-16 December 2012 in Florence) to commemorate the adoption of the Marcora Law and to discuss new ways for a civilian, unarmed and non-violent defense.

Italy Culture of Peace Freedom of thought conscience and belief