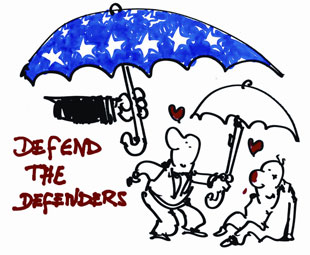 On 31st January 2017, the Foreign Affairs Committee of the Italian Chamber of Deputies approved a resolution for the protection of Human Rights Defenders. The resolution reflects the proposals made by a wide coalition of over 20 associations and organisations of Italian civil society that are currently working to defend human rights, protect the environment, for the freedom of expression and press, and to support activists and lawyers in danger across the world due to their line of work.

After first proposing the resolution to Paolo Gentiloni, then Minister for Foreign Affairs, the coalition organised the conference “Let’s defend them!” (Difendiamoli!), which was hosted by the Chamber on the 28th November 2016, to which defenders of human rights from all over the world were invited. The objectives of the initiative included putting pressure on the Ministry of Foreign Affairs to adopt instruments to protect activists in danger. It follows in the footsteps of other EU countries who have carried out the same process in the field. The position of the Italian parliament comes in a critical moment for Human Rights Defenders worldwide, which has seen a sharp increase in the attacks on those working in the sector, and during a month of initiatives carried out to remember Berta Cáceres, a Honduran environmental and indigenous rights activist killed for opposing a dam construction project on her native land.

As a result, the process of issuing temporary visas will have to be fine-tuned for those who feel the need to suddenly leave their own countries. Moreover, the Italian network is working to involve local authorities and institutions in the creation of “refuge cities” that will be able to give temporary protection and shelter. Coordinators of Italian Civil Society organisations are calling for Italy to put the protection of Human Rights defenders on the top of the political agenda. Italy will be next year’s president of the OSCE, which has already developed advanced guidelines on the subject.

The Italian coalition of Human Rights Defenders is composed of and sustained by: