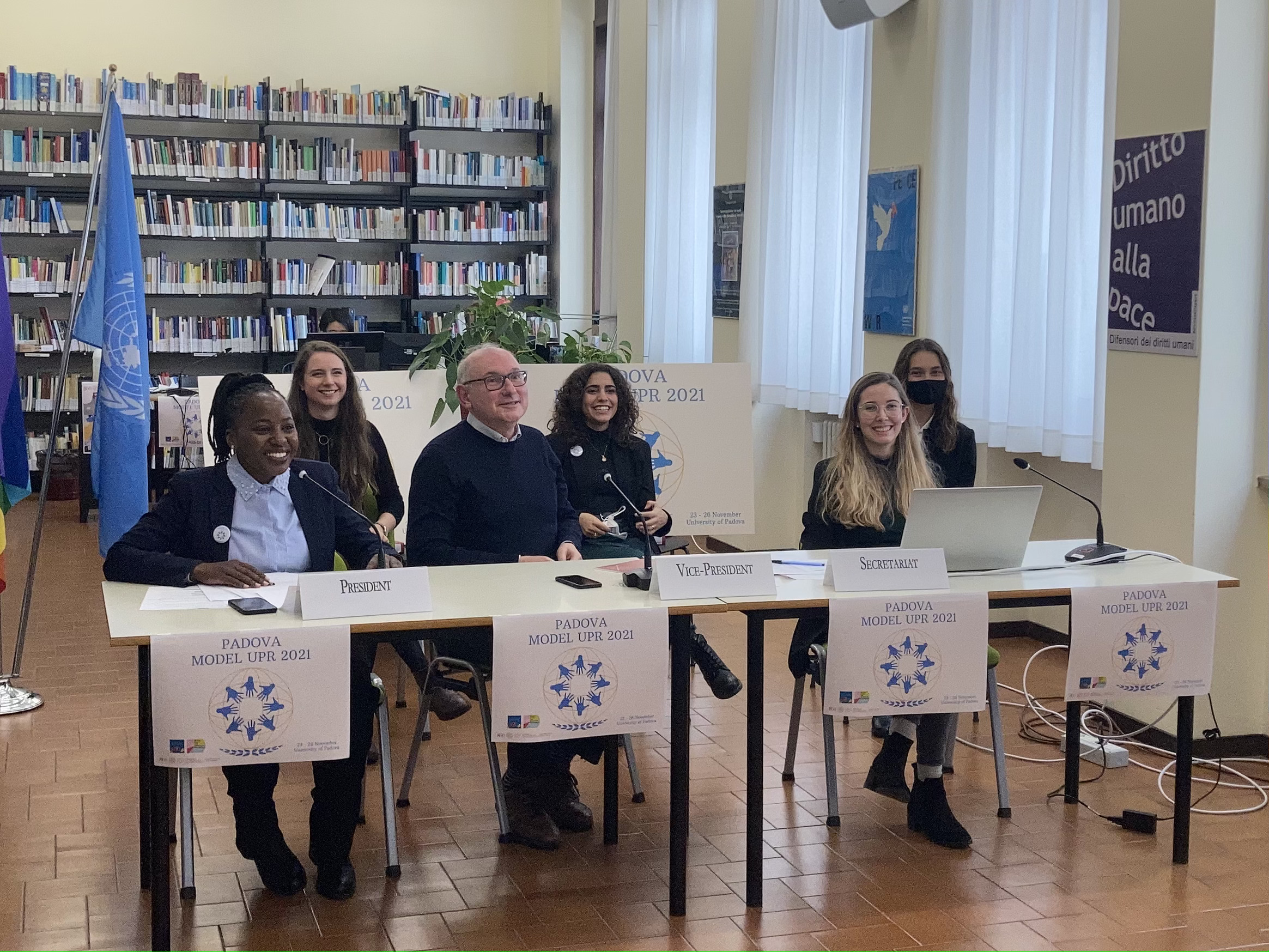 The 4th edition of the Padova Model UPR, held from 23 to 26 November 2021, came to its conclusion. The event was organised by an international team of students and former delegates, with the support of the Human Rights Centre “Antonio Papisca” and theDepartment of Political Science, Law and International Studies (SPGI) and the Archive "Peace Human Rights" of the University of Padova. The project is run in cooperation with the UPR Branch of the Office of the High Commissioner for Human Rights (OHCHR) of the UN and the NGO UPR Info. This year, 57 international students from 9 universities mainly in European countries participated in the simulation and the training activities associated, entirely carried out online, due to the pandemic. Thanks to the active participation and cooperation of the University of Graz, namely the European Training and Research Centre for Human Rights and Democracy, and the support of the Arqus Alliance Twinning Programme, some training activities could be organised at the University of Graz, including a seminar with Amb. Nazhat Shameem Khan, the 2021 President of the Human Rights Council.

At the Opening on the 23rd of November, Professor Paolo De Stefani, lecturer in International Law of Human Rights at the University of Padova, affirmed that the Padova Model UPR is a great opportunity to get in touch with this monitoring mechanism and welcomed all the participants, external evaluators and the guest speaker, Mr Gianni Magazzeni, Chief of the UPR Branch of OHCHR.

In his opening remarks, Mr Gianni Magazzeni stressed the importance of learning about the UPR mechanism from the inside, as the Padova Model UPR proposes to do. Mr Magazzeni also highlighted the achievements of the UPR mechanism, which provides states opportunities to review each other taking advantage of the expertise of the UN treaty bodies, the Special Procedures Mandate Holders, and of regional human rights organizations, national human rights institutions and civil society organizations. Mr. Magazzeni also welcomed the increased participation of states in the 3rd UPR cycle, despite huge challenges brought by Covid-19.

After the four-day simulation and more than one month of training and preparation, these are the awarded students.

The Best State Under Review: The award went to the team playing the role of the State delegation of the United Kingdom composed of students from the University of Padova: Francesca Bauleo, Giulia Busellato, Lauren Elizabeth Nichol Purkiss, Nathalia Andrea Grijalba Robles, Paola Comoretto.

The Best NHRI Delegation: The award went to the team playing the role of the representatives of the South African Human Rights Commission: Lea Kammler and Jennifer Möhrke, from the University of Graz.

The Best NGO Delegation: The best team was the one playing the role of the representatives of the Save the Children from the University of Padova: Luiza Sartori Costa, Maria Fernanda Bertanha Giusti.

The Best Performing Team According to the Participants:  The team playing the role of the State delegation of South Africa was awarded by the majority of participants: double congratulations on them!

The written submissions and the performances of all participating teams were outstanding this year. Irrespective of who were the awarded players, participants and teams deserve the warmest congratulations. All participants in the 2021 edition of the Padova Model UPR are invited to set up the new Secretariat team tasked to organise, hopefully, the 2022 Model.
And last but not least, these are the members of the amazing all-girl-team that in 2021 made it possible the realisation of the Model: assisted by Paolo De Stefani and Ling Han, they were Maria Clara Batista Herkenkoff, Marilena Joyce Caviness, Kathryn Cussen, Charmaine Idirashe Magosvongwe, Ekaterina Kuleshina, Jessie Pavan Borsatto, Sophia Willner (Master in Human Rights and Multilevel Governance, University of Padova), Sophia Urban and Stephanie Grasser (University of Graz).