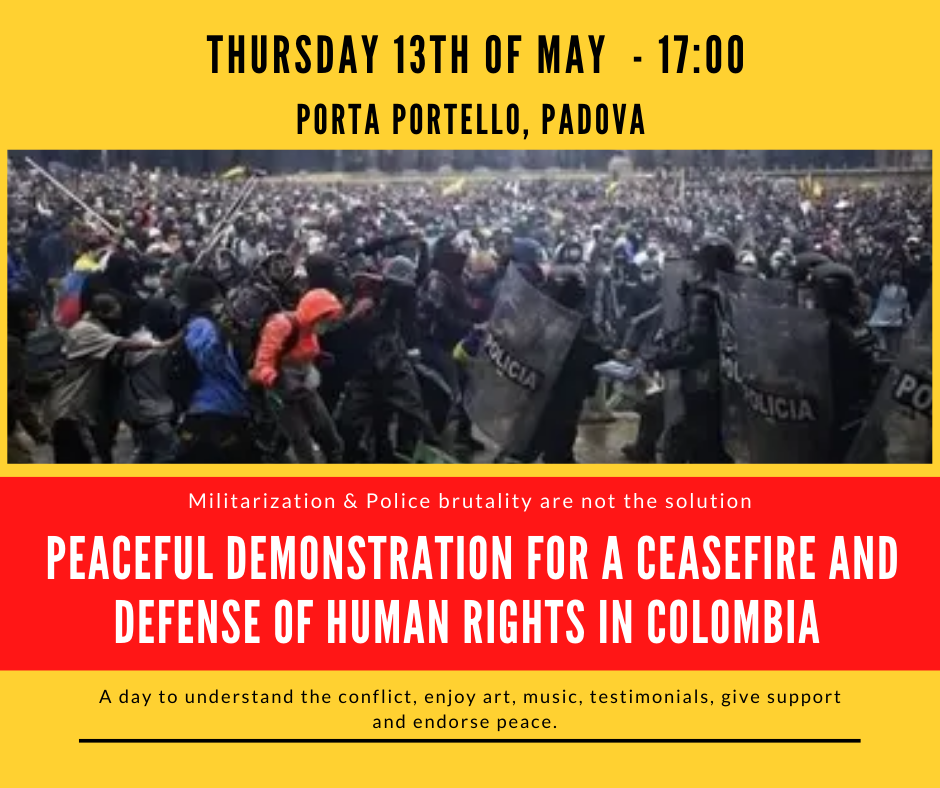 Peaceful demonstration for a ceasefire and defence of human rights in Colombia, Thursday 13 May at 5 pm, Porta Portello, Padova

In Padua, in Porta Portello, on Thursday 13th May 2021, a peaceful demonstration will be held in defence of the human rights of the Colombian population. A day to understand the conflict, enjoy art, music, testimonials, give support and endorse peace.

Between the end of April and the beginning of May, the President of Colombia, Ivan Duque, initiated a process of structural reform involving the fiscal, educational, health, pension and labour systems. For opponents, the measure would have hit especially the middle class and the most disadvantaged sections of the population, already hard hit by the pandemic and the related economic crisis.

During the demonstrations, the government, through the police and the army, reacted violently: there were 1956 acts of aggression, including 1003 unjustified arrests, 418 cases of violent interventions, 313 cases of physical aggression, 40 murders, 12 cases of sexual violence, 28 cases of eye injuries due to tear gas, 129 cases of shootings. This situation has attracted criticism from the international community, and in particular Amnesty International has stated: "In several cases the security forces have used lethal weapons and have made indiscriminate use of non-lethal weapons such as tear gas and water cannons. Security forces used Galil Tavorn rifles on 30 April in Cali and semi-automatic weapons on 2 May in Popayán. On 1 May, real bullets were fired from an armoured car in Bogotá.”

Following the street protests, the proposal was withdrawn, but the demonstrations continue, which has now resulted in general discontent with the actions of the centre-right executive, its poor handling of the pandemic and lack of inclusive dialogue on issues relating to the reform process.

The march is organised by students of the University of Padua, students of the Master's degree in Human Rights and Multi-level Governance, in collaboration with the Student Engagement Team (SET), SustainABILITY Padua, UdU Political Science.

Information on how to help and support Colombia (pdf, 4.24 MB , EN)

Colombia: Urgent call for a cease to violence against Indigenous Peoples in the context of the National Strike