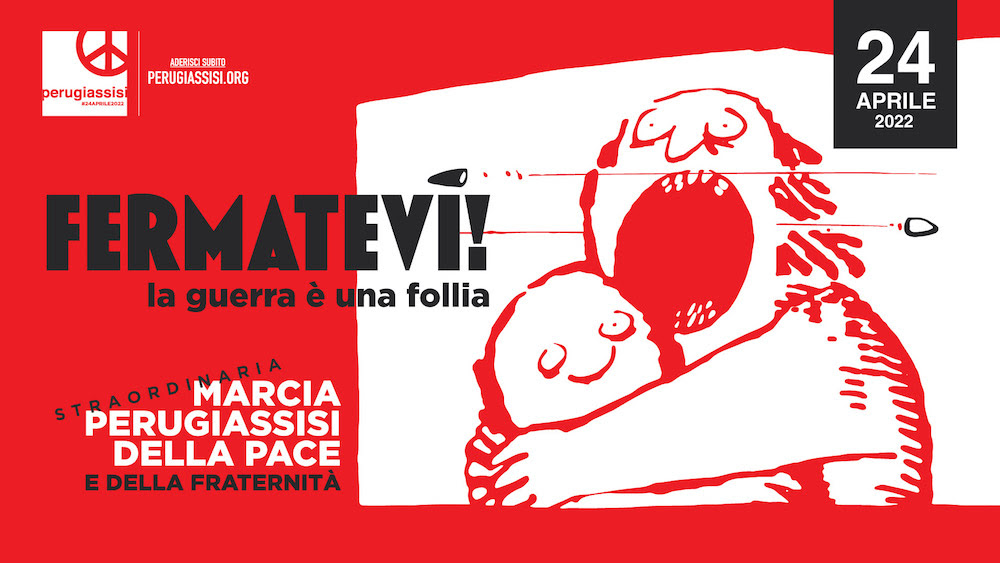 With each day that passes, the war in Ukraine becomes more inhuman and blind. Because of that we invite you to join us and organise together a Special Peace and Fraternity March Perugia-Assisi on Sunday, 24 April 2022.

Just before the Liberation Day, we will meet again to walk the path of peace, disarmament and nonviolence, following the footsteps of St Francis, Aldo Capitini, Giorgio La Pira and  Ernesto Balducci.

The preparation of the march will allow us to multiply our peace efforts by repeating everyday the cry of Pope Francis: STOP! War is madness.

The Peace and Fraternity March Perugia-Assisi should be the reunion point for many initiatives for peace, solidarity and aid for victims, that are being organised in our cities, at our universities and in our schools.

Let the protagonists be the students from our schools, starting with the youngest.

May Perugia-Assisi be the march of those who take care of the lives of others, always, in any case and everywhere, without distinction of any kind.

With hope for receiving as soon as possible your confirmation of participation, I’m sending you my best regards,

On the eve of Liberation Day

The Peace and Fraternity March Perugia-Assisi

From 24 February the war in Ukraine advances in slaughtering innocent lives, turning cities into cemeteries, threatening the world war and the nuclear disaster. That is why we say it has to stop!

With each day that passes the fights escalate and the war becomes more inhuman and blind, destroying every remaining space for peace. That’s why we repeat:  it has to stop NOW!!!

Stopping the war means negotiating now, with determination, about everything: the cease of fire, humanitarian corridors, the end of the war, the common security, the disarmament, the respect for human rights of all, including the minorities. Each path should be taken. We must engage in a dialogue with everyone.

The opening of multilateral, serious, structured, concrete, honest and brave dialogue under the authority of the United Nations is urgent. The Secretary General of the UN, EU officials and those engaged in international politics must do it now! Looking at the present moment but also at the future. To save the poor people that remain under the bombs. To prevent a nuclear disaster. To prevent the explosion of a new devastating social and environmental crisis. There is no  more important goal!

We multiply the peace initiatives and on Sunday, 24 April 2022, the eve of Liberation Day,  we participate in the Special edition of the Peace and Fraternity March Perugia-Assisi. Together with Pope Francis, we all say: STOP! War is madness.

Let no one submit to war and to the arm race. Let no one yield to the laws of violence. Let no one fall into the friend-foe logic. Let’s resolve problems that we haven’t yet wanted to face in accordance with international law. Enough of the war propaganda! Let’s stop the circulation of hatred and enmity. Let’s make peace. Let’s take care of the lives of others, always, in any case and everywhere, without distinction of any kind.

We stand in solidarity with the Ukrainians and all the victims of all forgotten wars that continue to cover the world with blood. With Russians who oppose the war, with those forced to fight and with the victims of anti-Russian persecution. With all the children, women and men of all ages that will pay the grave consequences of the war, in Italy and the rest of the world.

Whoever loves peace, as stated in the Italian Constitution, "rejects war as an instrument of aggression against the freedom of other peoples and as a means for the settlement of international disputes".