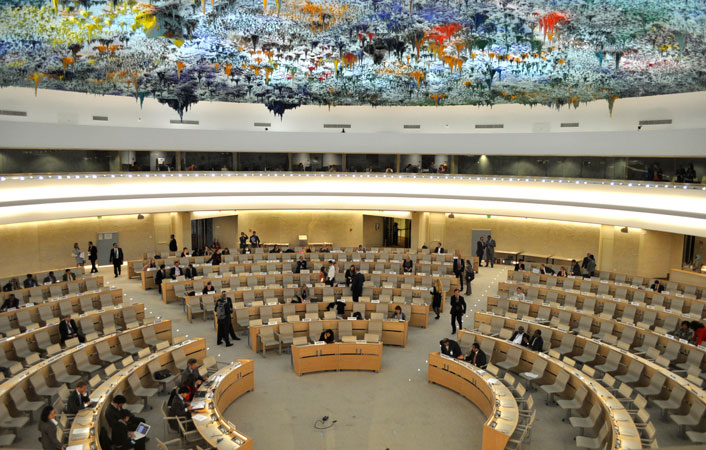 From 13 to 17 May 2012, a group of 25 students of the Master's Degree in Institutions and policies of human rights and peace of the University of Padua, together with five students of the European Master's Degree in human rights and democratisation, took part in a study-trip to Geneva. The trip has been organised by the Human Rights Centre of the University of Padua in cooperation with the two degree courses. Students have been accompanied by academic staff and Ph.d candidates collaborating with the Centre.

Students have been split into three groups with parallel programmes and had meeting and exchanges with staff of the UN Office of the High Commissioner for Human Rights (including Gianni Magazzeni e Mara Bustelo) dealing with topics such as the functioning of the Human Rights Council (including the role of special representatives and the advancement of the Universal Peer Review), the activity of the Treaty bodies (in particular the Committee against torture and the Committee on the right of the child) and human rights observation field missions. The groups have also met representatives from NGOs and international civil society organisations: Geneva for Human Rights, Upr.info, Plan International, Caritas International, Médecins sans frontières, the Coalition for the CRC NGO, International Commission of Jurists, as well as the Programme of the Norwegian Refugee Council on Internally Displaced Persons.

Special sessions have been carried out also with officials from international organisations, such as UNEP, WHO, ILO, UNHCR and the Conference for Disarmament. A group took part in two important session of the Committee against torture dedicated, respectively, to Syria and Rwanda. The same group has moreover met Alessio Bruni, member of the Committee. On Tuesday 15 May, students have had very open debates with Mons Silvano Tomasi, nuncio of the Holy See at the United Nations in Geneva, and with Ambassador Laura Mirachian, Head of the Permanent mission of Italy to Geneva.

The meetings took place mainly in Palais des Nations e Palais Wilson, as well as in the headquarters of the other organisations and NGOs. English has been the language used in all meetings.

The study-trip has been a very good opportunity to deepen many of the important issues addressed during the teaching courses at the University and to set up contacts and institutional and personal relationships with the officials and the experts met.