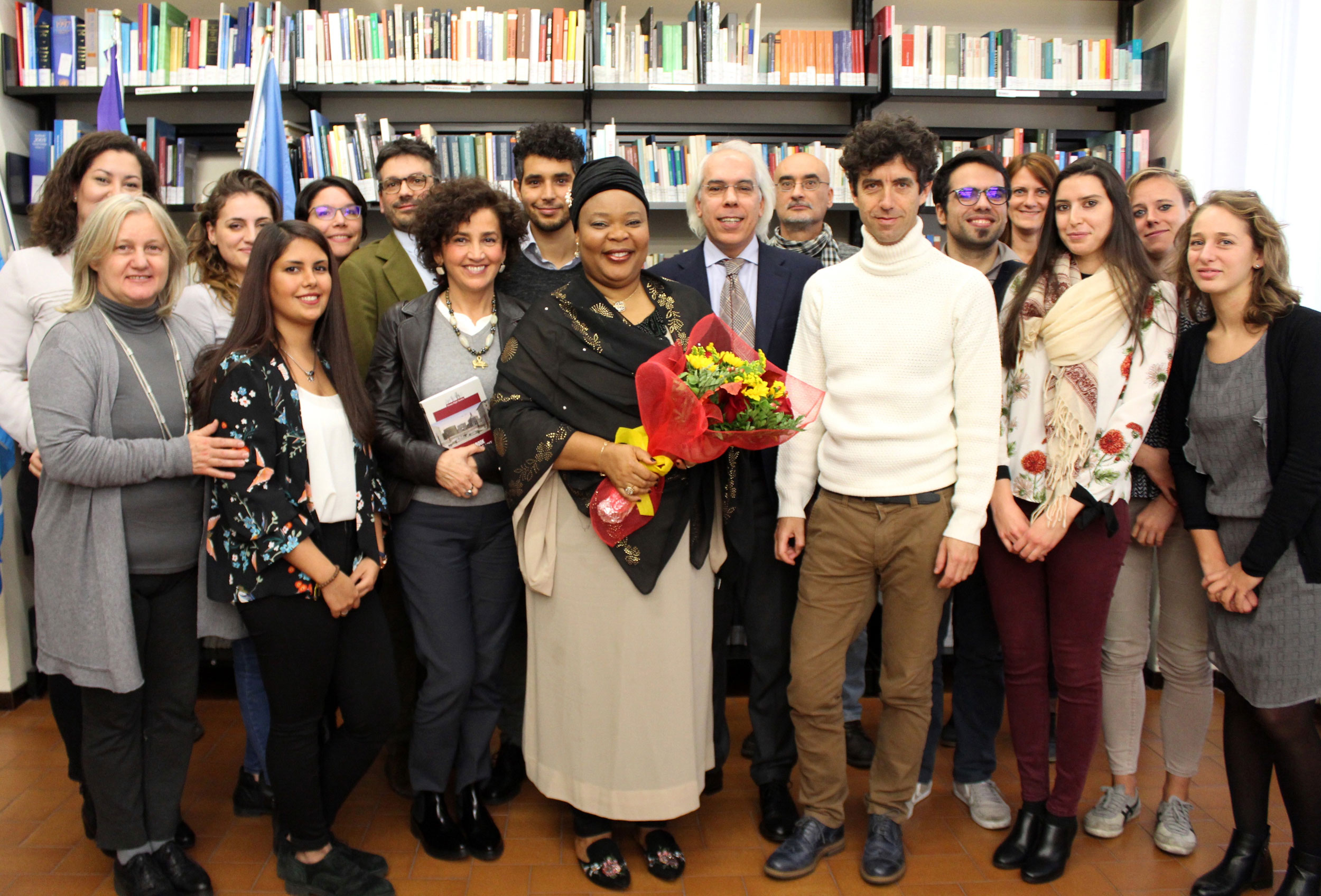 The winner of the Nobel Peace Prize 2011 Leymah Gbowee gave a talk to doctoral candidates, students and professors of the Joint Ph.D in Human Rights, Society, and Multi-level Governance and of the MA in Human Rights and Multi-level Governance on Thursday 16th November 2017. She was accompanied by prof. Annalisa Oboe, the Vice Rector for Culture, Social and Gender Relations, and was welcomed to the Centre by its Director, prof. Marco Mascia, and Vice director, prof. Roberto De Vogli.

The wife of a violent husband, Ms Gbowee decided to dedicate herself to peace and women's human rights in Liberia. She founded the Women in Peacebuilding Network (Wipnet) association, and in 2003, in the midst of the Liberian Civil War, she instituted and managed the Women of Liberia Mass Action for Peace, a Christian and Muslim association, which successfully set up a number of non-violent initiatives against the then-president Charles Taylor, the bloodthirsty warlord. The movement, led by Gbowee, played a decisive role in putting an end to the conflict and paved the way for the election of the first female president of Liberia, Ellen Johnson Sirleaf. The movement was characterised by the white clothing worn by all the activists. The "Women in White" organised prayer meetings, sit-ins, public demonstrations to put pressure on Charles Taylor and the other factions in conflict in order to find a peaceful solution to the war. Leymah Gbowee received the Nobel Prize "for their non-violent struggle for the safety of women and for women's rights to full participation in peace-building work".

The doctoral candidates in Human Rights presented their theses to the Nobel Prize winner, with themes ranging from International Criminal Law to International Humanitarian Law, from Violence against Women as a Violation of Human Rights to the Education of Human Rights, from participative governance on cultural sustainability, with a specific focus on European Capitals of Culture to the Regulation of Urban Landscapes and Urban Law in Democratic Societies, from Orthodox Christianity and Human Rights to Human Rights in a Biopolitical Frame, from the Implementation of Economic and Social Rights with particular attention to the Right to Health in the European Union to the Promotion of Justice in the Western Balkans, from Human Rights of Intersexual people to Non-judicial Mechanisms for Economic and Social Rights Accountability and The Role of National Human Rights Institutions In Africa, from the The psychosocial impact of labour trafficking in Asia to Microfinance as an Instrument of Cohension and Social Change.

In her presentation, Leymah Gbowee underlined the importance of collaboration between the academic world and the activist world in human rights and peacebuilding. These two fields have for too long worked separately and in silence, and the moment has arrived to link civil society and research in order to find a common strategy for creating a world where human rights and citizens are connected and interconnected at all levels. Activism can help the academic world to translate research into effective changes at a local level, and both have something to learn from the other -  however, the main objective is to diffuse their findings and reach different types of audiences transversally, to promote a culture of peace and human rights.

Leymah Gbowee, seeing the past 35 years of research in the field of human rights of the Human Rights Centre of the University of Padova,  hoped that accessible research could be an aim for the next 35 years of research, research that is appropriate for children (in children's books, activist research and education). Researchers have to be in close contact with communities, to become part of them, part of the territory and know the specific problems facing them in order for human rights to be taught and learnt from the first years of primary school. According to the idea of Leymah Gbowee, the Human Rights Centre will become a space where a new generation of Human Rights activists will be celebrated.

The Bo, magazine of UNIPD
Full video of the meeting with Leymah Gbowee at the Human Rights Centre