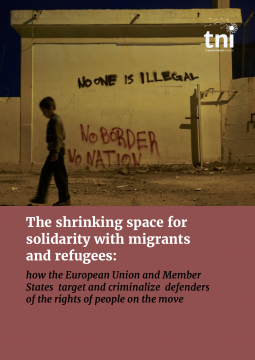 Transnational Institute: published a report on the criminalization of solidarity

The Transnational Institute has published “The shrinking space for solidarity with migrants and refugees: how the European Union and Member States target and criminalize defenders of the rights of people on the move”, a report on the criminalization of solidarity.

Europe’s “refugee crisis” triggered a wave of solidarity actions by both civil society organisations and ordinary citizens. Their efforts were part of a wave of compassion, as people organised convoys to refugee reception centers, warmly greeted arrivals at train stations and lined highways to provide food and water to those making the journey from Syria and elsewhere. Just a few years later, the report says, those same activists are treated as criminals and humanitarian search and rescue missions are criminalised.The current onslaught originated in the intensification of the EU’s restrictive approach to immigration policy from late 2014 and the EU’s treatment of Italy and Greece, front-line states on the EU’s migration routes. Today in Europe, solidarity with migrants and refugees can lead to arrest, legal troubles, or harassment. The actions of national police, judiciaries, political powers and far-right militants have created and compounded hostility to solidarity with refugees and migrants.The report looks at how EU policy has played out and offers a glimpse into the ways citizens and movements are resisting xenophobic and securitarian policies.

The Transnational Institute (TNI) is an international research and advocacy institute committed to building a just, democratic and sustainable world.

The full version of the report is available at the link below.

Transnational Institute, "The shrinking space for solidarity with migrants and refugees:How the European Union and Member States target and criminalize defenders of the rights of people on the move", report (pdf, 6.02 MB , EN)