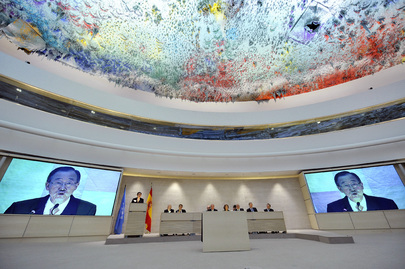 The UN Human Rights Council opened its forty-fifth regular session on 14 September 2020, hearing a global human rights update from Michelle Bachelet, the United Nations High Commissioner for Human Rights, as well as separate updates on the human rights situations in Nicaragua and Venezuela.

Ms. Tichy-Fisslberger, President of the HumanRights Council, extending a warm welcome to all delegations and other stakeholders present in the room or following the meeting virtually, recalled that the same health-related measures that had been applied to the forty-fourth session would continue to be applied to the forty-fifth session, until further notice. These proposed extraordinary modalities would apply exclusively to the current circumstances and should by no means serve as a precedent.

Ms. Tichy-Fisslberger presented the programme of work and then turned to a matter of urgency. By a vote of 25 in favour, 2 against and 20 abstentions, the Council approved the request of Ambassador Michael von Ungern-Sternberg, Permanent Representative of Germany - on behalf of the States members of the European Union that were members of the Human Rights Council – to hold an urgent debate on the “situation of human rights in Belarus”. The debate will be held at 10 a.m. on Friday, 18 September

The Council also heard a video message by Marise Payne, Minister for Women and Minister for Foreign Affairs of Australia, and then held an enhanced interactive dialogue on the High Commissioner’spresentation of her report on Myanmar.

In the afternoon, the Council heard the presentation of the report of the Independent Investigative Mechanism for Myanmar, followed by an interactive dialogue. It then held an enhanced interactive discussion on the COVID-19 pandemic.