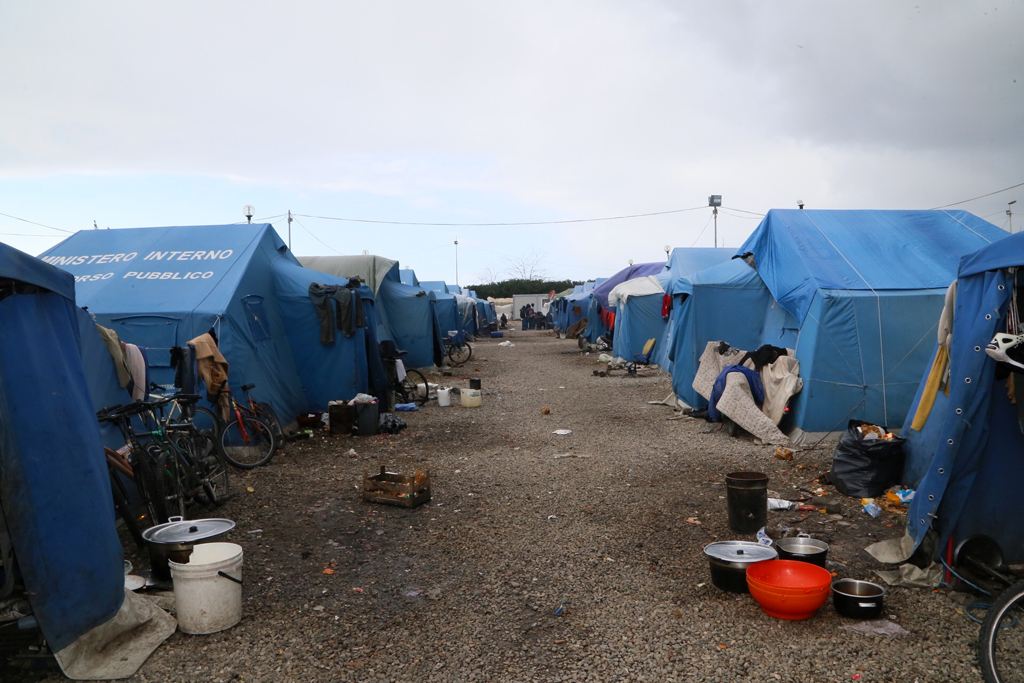 “There is no doubt that conditions did not conform to human rights standards, and were abysmal and completely unsustainable, but we are deeply concerned about the absence of adequate alternative options for the people who were living in the informal settlement,” the experts said.

“The authorities failed to explore all alternative options to avoid the evictions, as required under international human rights law. The forced eviction has further increased the pressure on the migrant women and men, who are mainly from sub-Saharan Africa, and are now facing even greater difficulties.”

Most of the camp’s residents worked in the nearby orange groves. Hundreds of them moved away in early March after they were informed of the imminent evacuation. Some residents with “humanitarian protection” status were transferred to a tented encampment set up locally by the San Ferdinando authorities. However, this has led to overcrowding, with between 800 and 900 people currently being housed there.
About 200 others were transferred to alternative reception facilities but a similar number are reported to have nowhere to stay because their situation remains “irregular” while their legal status is under consideration.

“We are particularly concerned about the fate of up to 200 migrant women who lived at the informal settlement before the eviction, as it is not clear what has happened to them,” the experts said.

“Resettling migrant workers in tents is not an adequate, sustainable solution. Evictions that leave people homeless or in grossly inadequate housing conditions are considered forced evictions under international human rights law and are a gross violation of human rights.”
Informal settlements should preferably be upgraded in situ, but where this is not possible, residents should be moved to adequate alternative housing as close as possible to where they lived before, the Special Rapporteur on the right to adequate housing said.
The UN experts urged the Government of Italy to ensure the protection of all migrants, regardless of their status, as well as their access to decent housing, sanitation and healthcare.
“Deliberately depriving them of their livelihoods and basic dignity leaves them at considerably greater risk of falling prey to criminals seeking to exploit them,” the UN experts said.

In December 2018, Italy adopted a new, restrictive “immigration and security” law. As a result, many migrants have been left in an irregular situation which marginalises them and increases their vulnerability to sexual and work exploitation.

One of the UN experts, Urmila Bhoola, visited Italy in October 2018 to assess the situation of migrants facing work exploitation in local agriculture. She saw for herself the San Ferdinando informal settlement as well as the newer tent city next to it, and will present the findings of her visit to the UN Human Rights Council in September 2019.