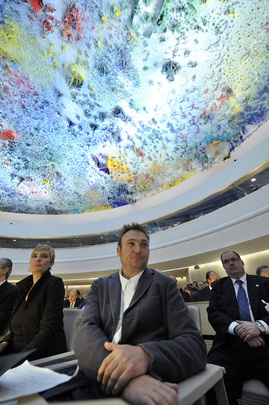 During the twenty-eighth session of the Human Rights Council (from 2 to 27 March 2015), the Italian Government responded to recommendations of the UPR’s second cycle.

The twentieth session of the Human Rights Council UPR Working Group was held in Geneva from 27 October to 7 November 2014. Italy was one of the countries under review, which discussed key human rights issues during the 3 hours interactive dialogue with other Member States, issuing recommendations on how to improve the human rights situations in the country.
The ratification and the implementation of international instruments, the National Human Rights Institutions (NHRI), discrimination and racism, minorities’ and Roma community’s situations, and migration are just some of the issues that were raised in connection with the human rights situation in Italy.

Therefore, last week, during the Human Rights Council twenty-eighth session, Italy accepted nearly all the 186 recommendations, considering them already implemented or under implementation.
On the remaining recommendations, those which were not accepted are:
- International Convention on the Protection of the Rights of All Migrant Workers and Members of Their Families (rec. no. 1-6): the Italian legal framework already guarantees the rights of regular and irregular migrants.
- Violence against children (rec. no. 126-127): the protection of children from all forms of violence within the family, including even mild corporal punishment, is enshrined in the Italian Constitution and in others legal provisions.
- Summary returns to Greece (rec. no. 170): Italy did not carry out summary returns to Greece, operational procedures at borders have been implemented according to a case-by-case approach.

Finally, the recommendation no. 182, which includes all migrants irrespective of their status within the national plans and programmes to ensure their human rights - is partly accepted. Programs to integrate are forwarded to all regular migrants entitled to stay in Italy, stated the Government of Italy in its replies to the UPR working group outcome.