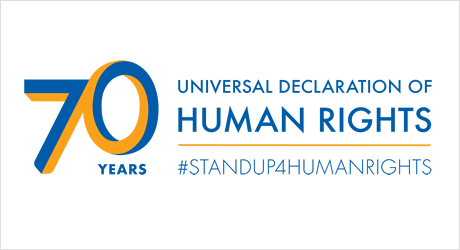 United Nations: a monthly global campaign of activation has been launched to lead up to the 70th anniversary of the Universal Declaration of Human Rights

The Office of the United Nations High Commissioner for Human Rights announced the start, in mid-November, of "a month of activation", involving events all across the world, leading up to the 70th anniversary of the adoption of the Universal Declaration of Human Rights (UDHR) on 10 December 1948.

The aim of the celebratory events sponsored by the OHCHR is "to shine a light on the many ways in which universal human rights contribute to the daily lives of people everywhere".

Celebratory events will be held in 14 cities spotlighting a human rights theme relevant to that location:

Dakar (Nov 30) – Our right to accountability when rights are violated

Bangkok (Nov 28) – The rights of people on the move

Manchester (Nov 12) – Our right to live in harmony

Geneva (Dec 13) – Upholding rights for a future we all want

Each event will be accompanied by a social media campaign featuring prominent global and local public figures standing up for human rights.

"I urge everyone to join in celebrating the 70th anniversary of the Universal Declaration. Join us at the public events if you can, or organize one yourself. Any way that you can take part actively – shining your light on rights – will make a difference, even if it is simply by participating on social media. By doing so, we can show just how precious the UDHR is to people all over the world, and the universal nature of the values it contains. It was an inspiration, a sensation, in 1948, and it is still an astonishing and inspiring document today".

"The preservation of the human rights set out in the Declaration is vital to each and every one us – woman, man and child. Human rights are essential for the protection and dignity of our loved ones, our families and friends, our neighbours and our communities – for all of us, whether living in the smallest village or in the greatest of cities. Violations of anyone's rights potentially undermine the rights of all of us. So I urge everyone to use the UDHR's 70th anniversary to reflect on what rights mean, and think of ways we can actively stand up for the rights of not just ourselves, but of everyone else".

In addition to the events taking place over the next month, on 9 November the Office of the United Nations High Commissioner for Human Rights will start publishing a series of short articles on each of the 30 Articles of the Universal Declaration. These will be published – one article a day – on www.ohchr.org and issued to media across the world.