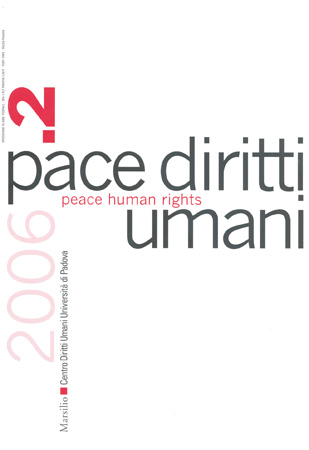 Good governance is world-wide suffering, human rights and the practice of democracy are suffering as well even in those countries where their experience is long-standing. The ongoing crisis of democracy, that somebody wants to export (even by bombing) is mainly due to the fact that issues relating to representative and participatory articulations of democracy continue to be addressed with reference to the «space» of nation-state in despite of a political reality in which huge and heavy decisions are taken outside and beyond that suffocating space.

Time has come for international-transnational democracy as necessary for internal and international peace, finally for sustainable good governance at all levels. Since local government institutions are forced to deal directly with problems that belong to the political agenda of world order, local authorities are fully legitimated to claim and actually play a visibile role in international affairs. Local polities are closer than other institutions to the vital needs of citizens. «Being territory, but not border», they are the primary (territorial) pole of subsidiarity also in the international system. Because of the ongoing processes of globalisation and transnationalisation, subsidiarity game to be effective should be played in the world space. Multilateral institutions are the world upper pole of subsidiarity. Local polities have a crucial interest in strenghtening and democratising the United Nations, the European Union and other legitimate international institutions. To achieve more adequate space in those institutions is a central goal of Cities Diplomacy, as necessary for their institutional health. Local polities should have more than an NGOs consultive status, that is the possibility to provide formal «advisory acts» within the international decision-making processes. The case of Italy is worth mentioning, because thousands new Statutes of Municipalities and Provinces include the so-called «peace human rights norm» that reads: «The Commune X (the Province X), in conformity with the Constitution principles that repudiate war as a means to resolve international disputes, and with the principles of International Law of human rights, recognises peace as a fundamental right of the human being and of the peoples. To this purpose it is committed to take initiative and cooperate with civil society organisations, schools and universities». By this statutory rule, Italian Communes and Provinces formally pledge to comply with the principles of the United Nations Charter, in particular with Article 28 of the Universal Declaration of Human Rights: «Everyone is entitled to a social and international order in which the rights and freedoms set forth in this Declaration can be fully realised». The very fact of taking over this «global» responsibility fits well the inner nature of the Local Polity as «being territory, not border». Cities Diplomacy is made by all concrete initiatives, especially public policies, that contribute to the construction of «social and international order», that is to build up internal and international peace in accordance with Article 28 quoted above. Therefore Cities Diplomacy should be conceived and carried out as an essential help to global governance. The first help should be provided at home, by pursueing the goals of the «inclusive city», that is by providing equal opportunities for the enjoyment of all human rights (civil, political, economic, social, cultural rights) for all and political participation to all those living in the city. The aim is to meet in a consistent way the requirements of «plural citizenship», which implies harmonising national (burocratic, historical)citizenships with the «universal citizenship» of «all members of the human family» (Universal Declaration). The ratio of the new, plural citizenship based on human rights is «ad omnes includendos», differently from the old «ad alios excludendos». To give way to this new concept of citizenship large educational and formational programs are needed. They should be carried out in close co-operation with civil society organisations, schools, universities. In front of the failed experience of development co-operation as monopolised by central governments, it is absolutely necessary to mobilise more human and material resources to carry out direct cooperation between cities. Since genuine co-operation is a substantial contribution to good global governance, the «political» profile of the so-called decentralised co-operation cannot but increase. To carry out tasks of comprehensive peace-building from below up to the United Nations, local authorities should be aware of the strenght of«soft power» and of the skills that are required to use it in the most effective way.