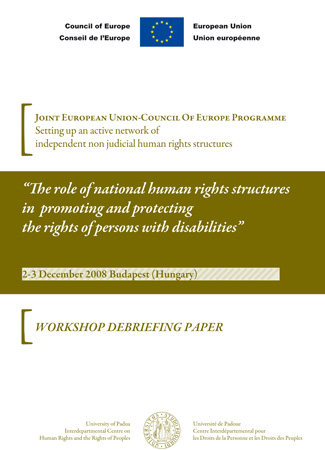 This publication summarises the findings of the workshop on the “The role of national human rights structures in promoting and protecting the rights of persons with disabilities”, which was organised in Padua (Italy) on 9-10 April 2008 within the framework of the so-called “Peer-to-Peer Project”, a joint programme between the Council of Europe and the European Union.

The main tool of the programme is the organisation of workshops for staff members of the National Human Rights Structures (NHRSs), in order to convey information on the legal norms governing priority areas of NHRS action and to proceed to a peer review of relevant practices used or envisaged throughout Europe.

In 2008, the fifth workshop of the Peer-to-Peer project was entitled “The promotion and protection by national human rights structures of the rights of persons with disabilities”. It was organised at the European Youth Centre in Budapest on 2-3 December and was attended by a total of 47 persons, including participants, speakers and organisers.

The workshop consisted of five working sessions. During the first session, participants identified obstacles preventing persons with disabilities from the full enjoyment of their rights, and discussed how to ensure that persons with disabilities have access to the NHRSs. This was followed by a session giving an overview of the international legal standards. Two substantive rights - namely the right not to be discriminated against, particularly in the field of education, and the right to legal capacity – were then discussed more in detail. The last session covered the role of independent national mechanisms, as laid down in Article 33 of the UN Convention on the Rights of Persons with Disabilities, and how to conduct visits to places where persons with disabilities are deprived of their liberty.

As a follow-up to this event, it was decided to produce this workshop debriefing paper which aims at summarizing the findings of the workshop and at providing practical information on the topic to the NHRSs, as well as references to documents concerning the role of NHRSs in promoting and protecting the rights of persons with disabilities.