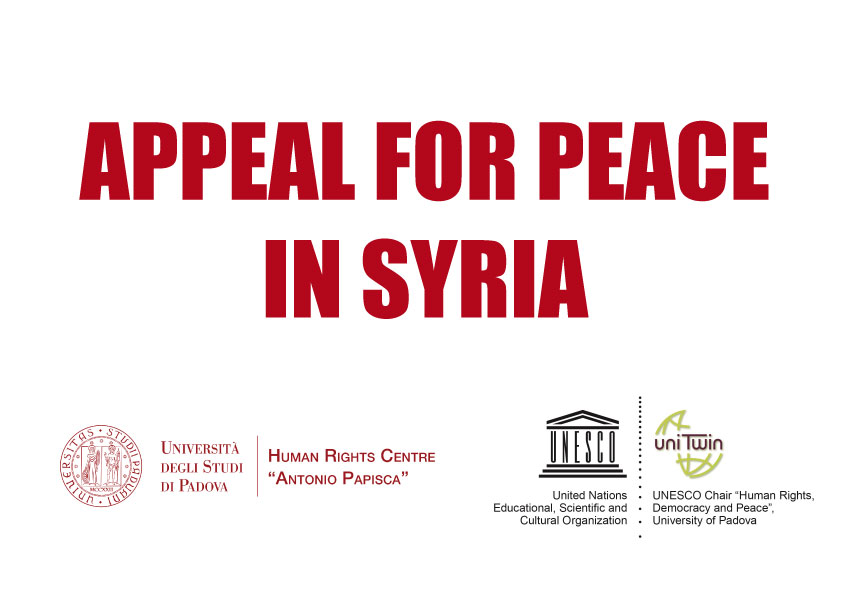 Appeal for peace in Syria

by the Human Rights Centre and the UNESCO Chair “Human Rights, Democracy and Peace” of the University of Padova, 14 October 2019

Stop immediately the Turkish unilateral military operation against the Syrian Kurds in the North-East of Syria. The conscience of the human family deeply rejects the ruthless and barbaric logic of the law of the strongest. The security that the Syrian and the Kurdish peoples need right now is internationally guaranteed human security.

The Turkish military attack amounts to violation of art. 2, paragraphs 3 and 4, of the United Nations Charter:

It also constitutes a violation of art. 1 of the North Atlantic Treaty, of which Turkey is a party:

To guarantee civilians’ access to humanitarian protection, respect for the law of armed conflicts, and the fundamental human rights of all those living in Syria, the Turkish military initiative must stop. The concerns of the Turkish State for its own security connected with the formation of a potentially hostile political entity at its southern border, will not dissolve by resort to military means, nor by manipulating the menace of a humanitarian catastrophe.

The attack carried out by the Turkish troops on the Kurdish positions in northern Syria, namely targeting the People's protection units (YPG), is the latest and certainly not the conclusive episode of a multi-faceted armed conflict started in 2011. Over eight years the conflict has known multiple transformations: from an uprising against a despotic regime it converted into a global confrontation against the so-called Caliphate of DAESH, then into a "proxy war" scenario fought by world and regional powers for the control of an area that is the strategic key of the Middle East.

The common denominator of the wars in Syria has been the utter disregard, on the part of virtually all political and strategic actors on the ground, of the most fundamental rules of international humanitarian law and international human rights law.

The openly criminal character of the conflict in Syria has emerged on several occasions and has been repeatedly denounced by the United Nations, the humanitarian agencies, and the independent observers who have been able to get close to the ground. Use of chemical weapons, systematic recourse to terror, forced transfers of civilian population, use of human shields, manipulation of the information and the media, attacks on humanitarian personnel, persecution and ethnic cleansing, systematic torture of prisoners, acts of genocide in a land that in past decades has already witnessed genocidal massacres. None of the most serious occurrences of international crimes have been spared to the Syrian land.

The unceasing changes of front by the various powers involved in the conflict have furtherly totally jeopardised the situation of inhabitants: nearly five million refugees have left the Country, while six millions are the internally displaced persons, and millions of people live in besieged cities or are threatened with bombardments.

The military operation launched some days ago by Turkey in the region of Rojava has as its target the YPG militias, those same combatants that, with the air support of a vast Western-led coalition, had conducted the final successful assault on the Daesh strongholds. The large-scale operation launched by the Turkish army however seems to be oblivious to its obligation to protect the civilian population and has indeed an open anti-Kurdish drive.

Thousands of ex-Daesh fighters, currently detained in YPG-controlled facilities, will soon regain freedom and the ability to do harm; fighting factions that had recently limited their operations, have regained strength and resumed their terror strategies and carried out arbitrary executions and enforced disappearances; new waves of refugees will be the by-product of this military action.

Faced with this further turn taken by the conflict, the international community, as well as any conscious citizen, has to respond firmly.

The political and strategic repositioning induced by the Turkish government's move risks not only to jeopardise the security and survival of populations shattered by years of conflict and repression, but also to further make the conflict to develop unpredictably. For this reason, nothing can justify the paralysis of the Security Council, in spite of the fact  that crimes against humanity and acts of genocide may have actually materialized.

We welcome the initiative taken by the five European members of the United Nations Security Council – France, Great Britain, Belgium, Germany and Poland - that, on Thursday 10 October, invited Turkey to stop its military offensive against the Kurdish Syrian forces. Despite the efforts of the European members, the Security Council did not, however, find an agreement for a resolution condemning the operation. It must be stressed that if the Security Council does not intervene, the responsibility for this lies with those who cause it, that is, with the Member States, in particular with those who use and abuse their veto power.

We appreciate the statement of the EU High Representative for Foreign Affairs and Security Policy. Among other things, she maintained that

the EU reaffirms that a sustainable solution to the Syrian conflict cannot be achieved militarily. The EU calls upon Turkey to cease the unilateral military action. Renewed armed hostilities in the north-east will further undermine the stability of the whole region, exacerbate civilian suffering and provoke further displacements. Prospects for the UN-led political process to achieve peace in Syria will be more difficult.

We appreciate the declaration of the Italian Government of October 13, stating that

Italy will work to counter the Turkish military action in the North-East of Syria with every means permitted by international law. The Italian government is convinced that we must act with the utmost determination to avoid further suffering to the Syrian people, especially the Kurds, and to contrast destabilizing actions in the region. The Italian Government believes that these objectives must be achieved through European coordination and by operating in a multilateral context in order to strengthen their effectiveness.

EU and Italy must hold steadfast on these positions. Any yielding to the logic of war would expose to an increasingly widespread conflict in the Middle East. The path of unilateralism, of doing justice into one’s own hands and imposing the law of the jungle, unreasonably pursued in recent years, has proven to be a dead-end road.

Appreciable but belated is the decision taken by some European States to suspend the sale of weapons to Turkey, given the volume of military supply contracts already in place. Also the decision taken by the EU in the midst of the "refugee crisis", to largely entrust the management of flows of Syrian refugees to Turkey, in order to keep them away from European territory, in exchange for a billionaire aid, appears today as unmistakeably short-sighted.

International law mandates States to disarm and cooperate to establish an effective and efficient international system of collective security, under the authority of the United Nations and with the collaboration of legitimate regional multilateral institutions.

The Charter of the United Nations establishes in its art. 1 that respect for human rights and the self-determination of peoples is one of the its main goals.

In compliance with the principle of "responsibility to protect", the International Community, and in its name the United Nations Organization and other legitimate multilateral institutions in cooperation with the UN, must intervene as soon as possible to stop the belligerents, start an effective strategy to allow the Syrian society to exit from the present conflict and to regenerate State institutions.

No war is justified. This new war in northern Syria is less so than any other. The war in Syria must be stopped by mobilizing all non-violent and unarmed tools that our societies and political systems have at their disposal: diplomacy, politics, the media, prosecution of international offenders, public demonstrations and individual and collective actions that express our dissent.

The Human Rights Centre and the UNESCO Chair “Human Rights, Democracy and Peace” of the University of Padova appeals to the academic community, the civil society, sensible political forces in all Countries, and to all citizens to make sure that these non-violent resources are adequately deployed; it rejoints all those who wish to contribute to build a genuine peace in Syria, a premise for the end of the armed conflicts also in Yemen and throughout the region.

Appeal for peace in Syria by the Human Rights Centre and the UNESCO Chair “Human Rights, Democracy and Peace” of the University of Padova, 14 October 2019 (pdf, 251.50 Kb , IT, EN)