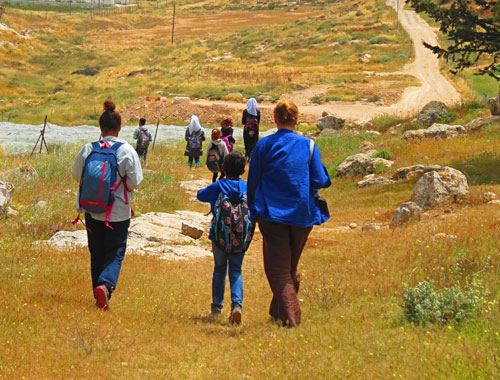 Michela Pugliese holds a master's degree in Human Rights and Multi-level Governance from the University of Padova. This In Focus article is an excerpt from her master thesis discussed, in March 2020, under the supervision of Prof. Pietro De Perini.

The Israeli occupation, now in its 53rd year, shapes the everyday life of the Palestinians in the occupied Palestinian territory (oPt), who learn to be disempowered and remain unheard, to have no control over their lives and no state authority to call if they need protection, to have no legal remedy nor justice in case of human rights’ violations. The situation in the oPt has been described as “a crisis of human dignity”, characterized by the erosion of livelihoods and the continued denial of basic human rights.

The Palestinian village of At-Tuwani, where I carried out my field research, is particularly explicative of both this broad-based insecurity and the need for alternative and external sources of protection. At-Tuwani stands in one of the most marginalized and arid regions of the West Bank, the South Hebron Hills, and it falls completely under Area C, under full Israeli civil and military control, as defined ad interim by the 1993 Oslo Accords. One of the most striking features of the South Hebron Hills is the widening gap between the deplorable living conditions of the Palestinian residents and the growing violations of their rights, on the one hand, and the high standard of living and the privileges enjoyed by the Israeli settlers, on the other. Indeed, Israel’s discriminatory policy pursues a parallel mechanism: it creates a coercive environment with unbearable living conditions for the Palestinians, while it encourages the development of Israeli settlements and outposts, which are illegal under International Law.

As At-Tuwani stands closed to the Ma’on settlement, the Havat Ma’on outpost and the “closed military area” known as Firing Zone 918, it is subjected to frequent episodes of violence and harassment from both Israeli soldiers and settlers. In 2004, after the request of the community of At-Tuwani, Operation Dove (OD), an Italian nonviolent peace corps, started to work in the village providing a peacekeeping approach known as Unarmed Civilian Protection (UCP). UCP organizations as OD deploy highly-trained unarmed civilians in violent micro-contexts to provide direct physical protection to civilians in need and to support local actors to engage in peacebuilding activities as well as in the ordinary activities that they may have suspended out of fear, eventually allowing them to live more dignified daily lives. According to the Responsibility to Protect doctrine, the international community has the right and the responsibility to intervene in case a population is suffering serious harm and the state is unwilling or unable to halt it or is itself the actual perpetrator of crimes. Yet even if new requests for human rights’ protection arise all over the world, most of these appeals remain unanswered. The lack of an early presence and a concrete response by the international community has led to an increase in the presence and range of action of civil society and non-governmental organisations, including UCP organizations.

Relying on the principles of nonviolence, non-partisanship, non-interference and independence, UCP helps to reduce the frequency, the intensity and the probability of attacks on civilians and to persuade armed groups to seek more constructive ways to address their problems rather than violence. UCP follows the Human Security approach, adopting a people-centred, bottom-up, comprehensive, context-specific and prevention-oriented notion of protection. Human Security is based on three components, freedom from want, freedom from fear and freedom to live in dignity, and therefore on the assumption that security entails much more than just the absence of physical violence. The Human Security approach is particularly relevant for the oPt because: 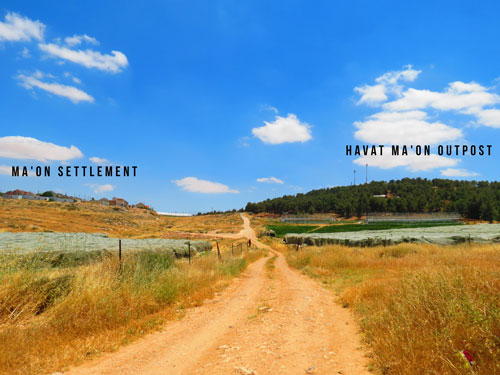 In At-Tuwani OD volunteers mainly take care of two groups more exposed to Israeli soldiers and settlers’ harassment: the schoolchildren and the shepherds.

The schoolchildren from the surrounding villages of Tuba and Maghaer al-Abeed have to walk on a road that passes between the settlement of Ma’On and the outpost of Havat Ma’On to reach their school in At-Tuwani. Since 2002 they had to walk with international or Israeli activists, particularly from the Taayush movement, or to take a two-hours route due to settlers’ violence and harassment. After two particularly violent episodes involving international volunteers and Amnesty International delegates in 2004, the Knesset Committee for the Rights of the Child ordered a permanent Israeli military escort for the schoolchildren to and from school. Nonetheless, the children are still frequently attacked by settlers and prevented from reaching their school. For the past 16 years, an Israeli military escort has accompanied the schoolchildren, with frequent delays, absences and misbehaviours, and OD volunteers have been present to monitor them, call the military base in case of delay, report any negative act, draft and spread factsheets, walk with the children when the escort is absent and, in case of confrontation with settlers, apply pressure on the soldiers, contact Palestinian and Israeli activists, inter-position shielding the children and try to de-escalate the situation. 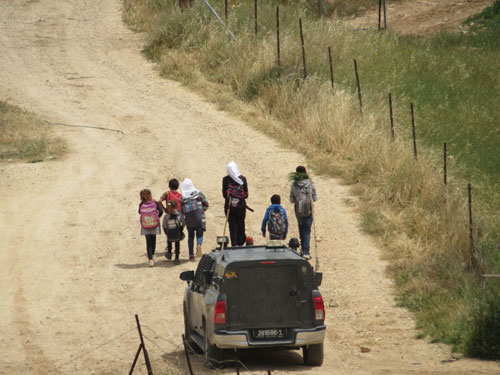 From generation to generation the shepherds of At-Tuwani have been free to graze their flocks in the valleys around their village. Yet since the 1980s, after the creation of the Ma’On settlement, they started to be frequently and violently attacked by settlers and prevented by soldiers from grazing their animals and working the lands around At-Tuwani. OD volunteers accompany and monitor the Palestinian shepherds anytime they ask it and, in case of attack, they apply pressure on the Israeli soldiers and settlers, try to prevent them from focusing aggressively on the shepherds, ask the legal justification of their actions and make videos to gather proofs and provide visibility to the violations they commit.

Two features define particularly the Israeli coercive occupation: the systematic violations of International Humanitarian and Human Rights Law and the unwillingness demonstrated by the international community to impose any meaningful accountability on Israel. Even if numerous resolutions have been adopted to condemn the Israeli policies and practices towards the Palestinians, they have never been accompanied by any meaningful consequence or improvement for the affected population on the ground. For the systematic violations of human rights, the impunity in which Israel acts and its dependency on a large slice of the international community, UCP in the oPt is a precious tool to provide concrete protection to the Palestinians, make manifest the asymmetric situation and topple Israeli internal and external support.

As settlers and soldiers’ violence in the oPt continues to be ignored by Israel, international volunteers are present to remind that “the world is watching” and to provide visibility to the abuses Israel commits in At-Tuwani and in the whole oPt through methodical observation, first-hand proofs and reports, so that they do not pass unnoticed. Accountability is indeed a crucial element of human rights’ protection both to bring justice to the victims who have been harmed and to prevent future violations. Thanks to the long-lasting presence of international volunteers, there is an improvement in the real and perceived safety of the Palestinians of At-Tuwani. Both shepherds and schoolchildren started to walk the routes that were become inaccessible due to settlers’ harassment and were abandoned out of fear. All the Palestinians interviewed claimed to be less afraid of the Israeli settlers and soldiers, not only because they feel they are backed by an international presence and network, but also because they started to take greater control over their own lives and organize their own peace initiatives. In May 2018, a group of young boys and girls of At-Tuwani created “Youth of Sumud” and started to involve in UCP tasks in the whole South Hebron Hills, supporting and accompanying OD volunteers and replacing them when they are not present. Resilience and steadfastness, i.e. sumud, were always and deeply present in the village, yet UCP made it flourish and have louder effects.

Yet even if the presence of international volunteers can be a powerful supporting force, the primacy of action belongs to local civil society actors, to both Palestinian and Israeli civilians. Israelis are more influential than international volunteers, as they can provide visibility within the Israeli media and public opinion, they cannot be expelled and, in case of arrest during a confrontation in At-Tuwani, they are generally released after few hours without charge. There is the need for more Israeli civilians to engage in the high-risk micro-contexts of the oPt and in UCP tasks, also because, since one of the main sources of power of UCP is a moral authority and the probability of an attack depends on the ability of the perpetrator to dehumanize the targeted person, no one is better than an Israeli Jew to persuade other Israeli Jews to change their mind. Acknowledging that national armies can no longer be considered the ultimately responsible actors for providing security nor states the only significant actor in international relations, UCP offers to ordinary civilians the potential for emancipation and the power to effect change from below.