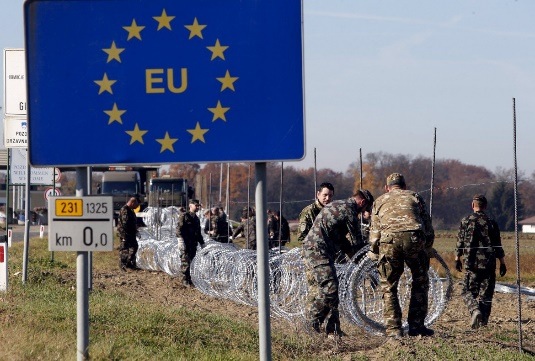 From Schengen to Dublin: limits of the European migration policy

Most people associate a negative meaning with the word “border”, something created to divide territories and peoples. Nevertheless, for the generations of people who grew up in the Schengen Era, borders have never represented an obstacle. On the contrary, they have always been perceived as something positive, a chance to create unity in respect of linguistic and cultural diversity.

However, the Austrian threat to build a barbed-wire barrier on the Brenner Pass and its decision to realise a fence on the border with Slovenia, therefore, continuing the widespread practice of erecting walls on the external borders of the European Union, creating a real fortress in Europe. Against which enemy are we actually defending?

A Europe without borders vs migrants’ movement

The creation of the Schengen Area, an area of freedom, security and justice and a unique symbol of European integration, has led to the abolition of internal borders provided that the external borders are adequately controlled.

In the mid-1980s, a harmonisation process for rules took place with the aim of guaranteeing the freedom of movement, including rules on immigration and asylum, which had always been the exclusive competence of the States. These alignment rules and values have been collected in the Schengen acquis and the Dublin Convention. The main objective of the Convention, later transformed into the Dublin Regulation, was and remains to limit the movement of migrants within the Schengen Area, in particular the phenomena of asylum shopping. The Dublin Regulation clearly establishes that a single State is responsible for examining the application for international protection, using in most cases, the criterion of first entry country, that is, an asylum seeker is not allowed to move to and apply for protection status in a Schengen country other than the entry country.

Despite the obvious inequity of the geographical criterion, the system seemed to work at the beginning. However, since 2004, with the enlargement of the Union toward East, migrants’ countries of origin have changed, and the number of people who left their home countries for conflicts or economic reasons was increased. The gatekeeper States at the external borders of the Schengen Area, put under pressure, were accused of not adequately controlling borders, not following the procedures established foreseen in the field of asylum, and favouring the illegitimate secondary movements within the European area.

Border control reintroduction: a response but not a solution

The European Union believes that those who are fleeing wars and persecutions have the right to seek protection, but they cannot choose where to submit the request because of the presumption that all Member States are considered safe. On the contrary, the European Courts in Strasburg and Luxembourg have established with their judgments that some Member States, such as Greece and Italy, disproportionately affected by great migratory flows, are not able to guarantee respect for fundamental rights due to deficiencies and defects in the reception system. Therefore, the choice of migrants to move to other EU states in search of better levels of protection and life expectancy is legitimised.

The EU, however, accepts a single interpretation: secondary movements are contrary to the rules established by Dublin regulation and represent a threat to public order and internal security. According to the Schengen Borders Code, these reasons fall within the range of preconditions that admit the reinstatement of border controls as a measure of extrema ratio, under the driving principle of proportionality and time limit.

Although article 29 of the Schengen Borders Code provides that, the Commission itself may suggest the adoption of such measures in the presence of serious and systematic shortcomings in external border control, the decision in this regard remains the prerogative of the State. If in 2011, following the Franco-Italian affair (the first crisis in the European area), the reintroduction of border controls was considered an exceptional measure, in 2015 it assumed an ordinary character, justified by migratory flows from the Middle East. Since September 2015, Germany, Austria and 7 other Schengen countries have reintroduced internal border controls, identifying secondary movements as a threat to their national security.

The Tarvisio Case: invisible borders, but not for all

While we witness the re-appropriation of part of the lost sovereign power and the exploitation of migrants for electoral purposes in some places, we also observe the implementation of measures based on the principle of solidarity and sharing of responsibilities in others, such as the case of the Tarvisio border police and joint patrols carried out in collaboration with Austrian colleagues. 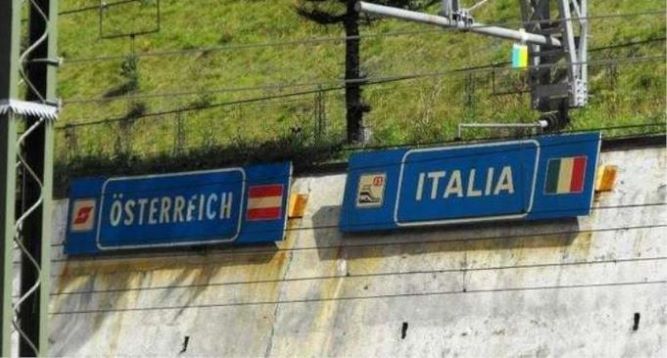 Tarvisio is a small Italian town situated in the middle of the mountains, a few kilometres from both Austria and Slovenia. After the abolition of the border control between Italy and Austria in 1998, the border police felt the need to reinforce the collaboration between the agents of the two countries, to better fulfil their dual mandate: to guarantee freedom of movement and to combat and control irregular migration, respecting the Dublin rules. For this reason, to speed up the process, border police have adopted a readmission agreement, which establishes that irregular migrants entered in Italy throughout Austria, have to be taken in charge by, and readmitted in Austria without formality, and vice versa. In 2015, this territory, as the whole Schengen area, was particularly affected by the great number of migrants coming from the Balkan Route. The Austrian and Italian border police signed a memorandum of understanding to illustrate the main guidelines to put in practice the joint patrols.

The checks take place on the road and on all trains that cross the border every day, in Austrian and Italian territory. The mixed teams composed by Italian and Austrian police agents carry out random checks on travellers. If travellers do not meet the requirements to travel within the Schengen area, they are stopped in the territory in which the check takes place. The readmission procedure, therefore, becomes unnecessary: those stopped are later on taken in charge to define their status. This practice, analysed in conjunction with the readmission agreements, is to be considered successful concerning the number of migrants controlled and the methods and speed of taking charge of tracked-down individuals. In this way, the same result of the restoration of border control is obtained through collaboration, as indicated in the recommendation of the European Commission of 2017. These measures, due to their informality, flexibility and, in some cases, confidentiality, arouse some concerns about the difficulties of distinguishing them from the abolished border checks and the potential discriminatory criteria of police of stopping and checking. As mentioned, the rules defining the practice of the joint patrols are written in a memorandum of understanding, a confidential document unavailable for public scrutiny without any reference to the rights of the checked and eventually stopped migrants.

The Dublin and Schengen systems were tested in 2015. The result led to the idea that a dissolution of the Schengen Area remains a remote possibility also because all the measures implemented, even if lacking a community spirit, were consistent with European legislation. As regards the Dublin Regulation, on the other hand, the test revealed all the inequity and the problems related to the criterion of first entry country.

Although there is awareness of the need to go beyond the regulation, the will of the states is lacking, and an agreement on the reform of the system has not been reached. In the proposal presented in May 2016, the Commission attempted to really apply the solidarity principle and to further limit secondary movements.

With this proposal, the EU made an attempt to transform the temporary relocation mechanism adopted by resolutions 1523 and 1601 of 2015 into an automatic and mandatory mechanism, which redistributes asylum seekers as soon as the States of first entries reach a maximum threshold of requests to be examined. However, the Visegrad countries, Italy and Austria, all known as transit countries, have always been against this mechanism because they require a more flexible and prompter relocation procedure which would reduce more significantly the number of asylum applicants in their country.

The proposal focused on the reduction of secondary movements through movements control and sanctions to those who move illegally to a Member State different from the one which is responsible for processing their asylum applications.

The punitive approach certainly can not limit the desire of migrants to move to another country. An incentive-based approach is needed. It has to foresee the possibility of providing limited choice for asylum seekers; at the same time, it is crucial to promote equal reception conditions in all Member States.

In recent years, member states and the European Union tried to solve the issue of migratory flows originated by instability in the Middle East through an outsourcing policy for migrants, reaching agreements with transit countries nearby and outside the EU. In order to close the border between Greece and Turkey, which has become the main access point for refugees fleeing Syria, the EU-Turkey Statement entered into force on 20 March 2016.

Europe was well aware that Turkey was not a reliable partner; nevertheless, it still preferred an agreement with a country not famous for its respect for human rights and fundamental freedoms, in an attempt to reduce flows of asylum seekers travelling from Syria to Europe.  This praxis was insinuating the idea that the Union countries, signatories to the Geneva Convention, do agree that individuals who are persecuted or fleeing conflict are entitled to receive protection. However, they prefer that other countries, rather than themselves, are engaged in providing protections and consequently bearing the associated costs.

It was evident that the foundations on which the EU-Turkey Statement was built were too fragile and that the agreement would not have been resolved in the best possible ways. In recent years, the EU has been under constant blackmail, tolerating Turkish actions that should instead have triggered European intervention. Accusing the European Union of not respecting the provisions of the Statement, at the beginning of March 2020, Turkey reopened the access routes in Europe to Syrian refugees, who then poured on Greek land borders. 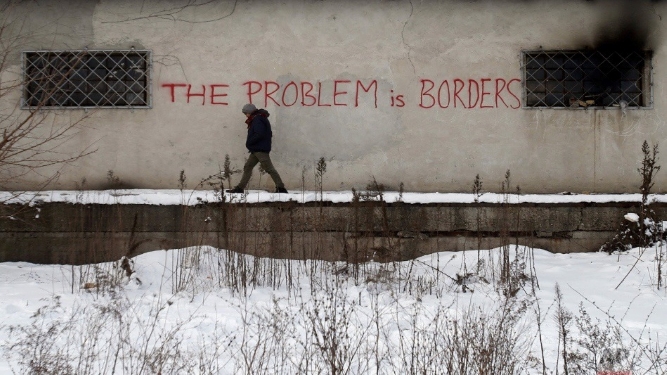 In the last years, the European Union not only confirms itself as unprepared to face the eventuality of a new, large, predictable flow of migrants, but it is making itself violating international law by denying aid to hundreds of people who are fleeing conflict. Is this our idea of Europe?

Those entering Europe should not seek protection in a Member State, but in the European Union itself. Giving asylum to those who flee war and persecution is a moral and legal imperative. We need a forward-looking political class that proposes an asylum policy based on the principles of solidarity and sharing of responsibilities, guaranteeing human rights and fundamental freedoms for everyone. During her visit in Greece, the President of the European Commission declared that “Greece is the shield of Europe”; however, to manage better and receive migrants and asylum seeker, Europe needs no shield.

Joint patrols are an example of good practice of cooperation between European countries, but this system can and must be improved. The establishment of a monitoring body, such as an Ombudsman, and the collection of reliable statistical data would be necessary to verify the proportionality and frequency of checks and the to guarantee that everyone’s rights are respected. Moreover, some new implementations are considered crucial, like abandoning the logic of “to each one his own foreign”, overcoming the criterion of the State of first entry, leaving the idea that management of migrants by engaging a police force-based security approach and border controls will solve current problems. Instead of this, another approach is desirable, able to put at the very heart of European migration policy the real needs of the people involved and of the states most affected, those of first entry.