Land grabbing: what does it truly mean?

Ludovica Dal Molin, holds a master's degree in Human Rights and Multi-level Governance from the University of Padova. She is currently working in an organization that deals with the integration of migrant women. This In Focus article is excerpt from her master thesis discussed, in November 2017, under the supervision of prof. Paolo De Stefani.

Land grabbing is a term that is getting higher attention in the mainstream debates (articles, conferences, media), but what does it truly mean? Why should we be concerned about it?

A chart of the top 10 investors and target countries by Landrmatrix.

As regards the investor countries, a South-South trajectory is emerging where fast growing countries (Malaysia, China, Brazil, India) are getting increasingly involved in inward and intra-regional land grabs.
On the other hand, concerning the target countries, they are characterized by a weak legal system, lower labour standards and inadequate human rights protections, but also for their evident fragility. Most of them show democracy fragility, by sharing  some common features, like: being states of freshly independence with fragile national structures; countries recently involved in civil or internal wars, political tensions or famine; nations governed by despotic regimes not interested in the population’s well-being but only in securing the necessary economic and political ties for keeping the power. Hence, for different reasons, they are fragile states in clear necessities of foreign investments, with low bargaining power, keener to undersell their land and natural resources in order to achieve economic security.
Moreover, it is evident that these processes are impacting on the poorest areas of the world, where agriculture is still the economic leading sector or the unique means of subsistence for most of the populations, as testified by the underlying chart: 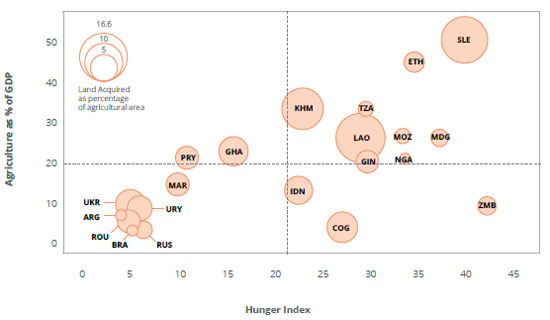 Typology of land acquisition according to the Global Hunger Index 2015 and agricultural GDP (Land Matrix Report 2016).

The graph presents the top target states describing them in terms of hunger incidence and their reliance on agriculture for GDP production. According to Land Matrix, for most of them diffuse and severe malnutrition is still a reality and the wealth of the country and population itself is based on farming. Therefore, it means that in these contexts the widespread privatization and dispossession of land for development, if badly managed, can heavily affect the economy and the level of food security, making these countries even more vulnerable to hunger and multiple crisis.
However, in these countries, land grabbing projects are based on capitalized and highly technological industrial and farming practices that are totally export-oriented. These methods are not intended to create shared economic benefits from which also the local people could grow and develop. On the contrary, these projects require massive quantity of land that will not create jobs or alternative ways of living. They are simply extractive businesses aimed at outsourcing food and natural resources in order to sell cheaper outputs in the domestic and international markets.
In fact, each project is not followed by the growth and construction of manufacturing industries where the commodities can be transformed and processed, creating collateral economic activities and new jobs. According to Ben White the land grabbing can be considered as a new course of the old process of ‘Enclosure’ of land, which took place in England in the XIX century. However, where it is taking place, this new wave of enclosure is not going to be followed by a new pervasive industrial revolution like in the past and it is not going to have a significant role in the domestic GDP production in comparison to the quantity of land that is required and the consequences at the local level.  Then, it is licit to wonder, what the future of the population involved will be if the governments and corporations are only interested in their land and not in the landless future of these farmers.
In these contexts, the land grabbing effects on the population are crushing ranging from forced eviction, loss of land and livelihood, food insecurity, chronic poverty, systematic persecutions and violence, migration, increased social inequalities, physical and mental illness, environmental degradation, to the disappearance of entire traditional native cultures and languages.
Due to the nonexistence of national legal norms that can protect them, the rural communities are using the international human rights law as support for claiming their rights and self-determination. However, so far, the right to land has only been coded in the UN Declaration for the Rights of Indigenous Peoples; therefore, it cannot be supporting the cause of various rural communities. Nevertheless, there is a progressive tendency to consider the access to land essential for the enjoyment of other basic human rights as the rights to: food, water, adequate living standards, work, housing, not to be subjected to inhuman and degrading treatments. Therefore, the protection of this rights indirectly safeguards the right to land.
However, the human rights defenders, rural communities and farmers organizations that are fighting land grabbing are frequently subjected to violence, ostracism isolation and criminalization for their claims and actions. Thus, resolute, effective and immediate counter actions are needed. However, those embraced so far by the international community have proved to be weak and inefficient due to a mainstream short term and profit-oriented approach – adopted both by investors and governments.
To be effective, human rights defenders should re-frame the international land debate, putting at its core the human rights and the well-being of the affected communities and their environments. In doing so, the human rights defenders should identify and pursue an alternative development paradigm. This shall lead to the adoption of an inclusive and sustainable land reforms (i.e. setting common goods at community level), that shall secure the right to food (i.e. land shall serve demand from local people in first) within a new circular economy framework (value extracted shall be equal to capital invested in the same area, balancing the capital owned by the future generations).
This would be possible only through multi-level and concerted efforts of all the actors involved, starting from the international community, the national governments, private investors and civil society.