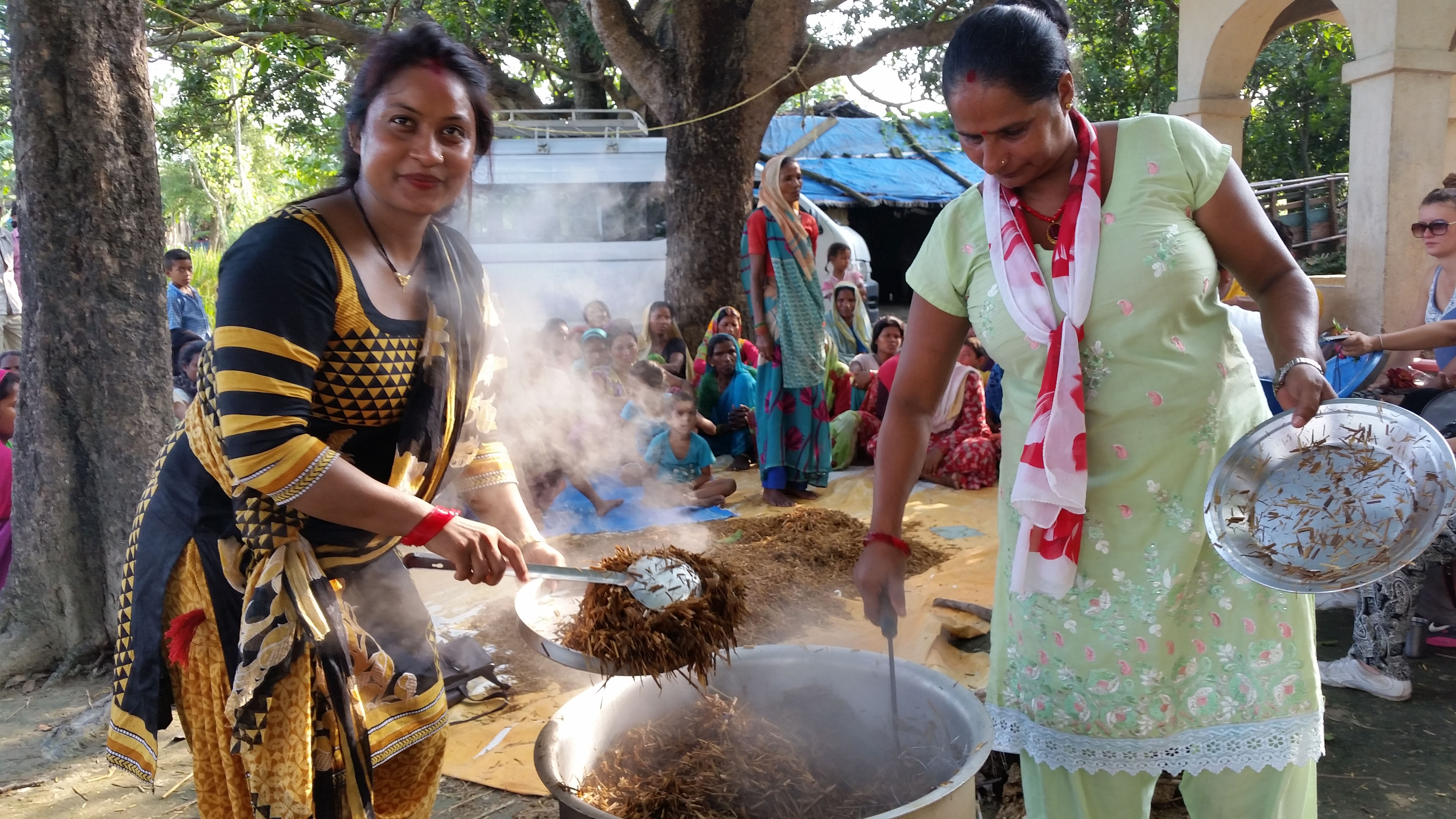 Microfinance and women’s empowerment in Nepal

Martina Giulia Daelli holds a master's degree in Human Rights and Multi-level Governance from the University of Padova. She is currently a trainee at the Italian Sustainable Investment Forum in Milan. This In Focus article is excerpt from her master thesis discussed, in November 2018, under the supervision of prof. Alberto Lanzavecchia.

Women around the world suffer multiple forms of discrimination: they constitute the 70% of the world's poor and face barriers to access education, health services, property, control of economic resources and are underrepresented in politics. Therefore, finding effective ways to empower them is crucial for social justice.

Women empowerment: “The process by which women gain greater control over material and intellectual resources and challenge the ideology of patriarchy and gender-based discrimination of women in all institutions and structures of society”. (Srilatha Batliwala).

Microfinance is considered a useful tool for addressing gender inequalities and poverty at the same time: by accessing capital, women gain more bargaining power within the household and in participating in groups they have the possibility to share their experiences with other women, take conscience of their collective oppression and organise to bring about social and political change.
However, on the empowering potential of microfinance, evidence is often controversial and a deeper analysis of its mechanisms is needed.

Microfinance: The provision of financial services to poor people who are excluded by the traditional financial sector (The World Bank). Microfinance started with microcredit, the provision of small loans with rapid turnover and no collateral, and used in the field of development since the mid-1970s, with the foundation of the Grameen Bank by economist Muhammad Yunus in Bangladesh.

To evaluate a microfinance program with the objective to empower women, it is important to analyse the approach underlying the intervention. Holvoet makes a useful distinction between using an “instrumentalist” and a “transformatory” approach to female targeting in microfinance projects.
An instrumentalist approach targets women to ensure repayment, not only without questioning gender relations, but also exploiting them reinforcing the inequalities characterising those structures and relations.
Usually, women have better repayment rates than men and spend more time and resources for the children’s wellbeing but it is important to keep in mind that this is a consequence of specific aspects of patriarchy, that in shaping the construction of “good mothers”, identify them as those who make sacrifices for their families. Microfinance programs are exploiting these oppressive structures and work within them to ensure repayment.
Restricted mobility of women is also used instrumentally in this kind of schemes: women feel they can’t “run away”, they feel shame very easily and non-repayment is considered a matter of family honour.
A transformatory approach, instead, has the aim to change gender relations and stimulate collective action.
During group meetings women can share their experiences, recognize the collective nature of their problems and organize to end the systemic discrimination they suffer; however, this mechanism is not automatic, women’s empowerment needs to be explicitly pursued by the programs.
According to a study conducted by Holvoet in Tamil Nadu in 1990 and 1997, when the projects have narrow financial intermediation aims, their impact on women’s empowerment will be weaker than in those cases where the investment in the time spent in groups has broader objectives.
The projects that have also capacity building aims push groups to participate in the public life of the community and to become more involved in local institutions. More and more women participate in local panchayats and thanks to networking with other groups in different regions, women can influence politics at higher levels.

The Status of Women in Nepal

Nepali society is characterised by a huge ethnic, linguistic and religious diversity that makes the identity of women particularly complex. Gender-based discrimination and violence against women are still widespread despite improvements in recent years, especially in primary education.

Nepal has ratified 24 international human rights instruments, including CEDAW, UNSCRs 1325 and 1820 and committed to the Beijing Platform for Action.

The Constitution of Nepal recognizes the principle of equality and non-discrimination also on the basis of sex and provides that special measures can be taken to improve the status of disadvantaged groups (art.18). All Nepali citizens have the right to own property (art.25), however, Nepali women have restricted access to property and land. In fact, only the 19.7% of Nepali women are landowners and the portion of land they own is small (5%) despite agriculture constitutes the primary occupation for the 75% of Nepali women.

The Women’s Bill of 2002 recognises equal rights to inheritance for unmarried sons and daughters and enhanced the position of divorced women and widows granting them part of their husband’s property. Nevertheless, a study conducted by Rankin about the Newar community showed that despite unmarried women had the right to inherit part of their father’s land, normally they didn’t reclaim such right because it would have meant to breach consolidated traditional relations. For women, the economic autonomy given by the ownership of land, guaranteed less advantages than the traditional dependent status of wife or sister.

Domestic violence is the most widespread form of gender-based violence, perpetrated mostly by husbands (84%) or siblings (38%) in the case of never married women. Domestic violence is often associated with alcohol abuse and sometimes justified because of the deeply embedded patriarchal mindset. In fact, according to the Demographic and Health Survey of 2016, more than one in four women and the 23% of men agree that wife beating is justified under a specific circumstances, and according to a study conducted by UNICEF in 2014, 46% of boys and 42% of girls believe that a woman should tolerate violence to preserve family harmony. Concerning traditional harmful practices, Chhaupadi is still practised, especially in Mid and Far-western regions of Nepal. During their menstrual period, women are secluded in small huts, facing the danger to be raped or to be assaulted by animals and sometimes they die suffocated trying to light a fire to warm themselves. Chhaupadi was banned by the government because of its dangerousness, but it is far from being eradicated.

Microfinance in Nepal, a tool for women’s empowerment?

The livelihood of the majority of the Nepali population depends on agriculture and microfinance was initially introduced in the country as a tool for rural development.  When policies related to “rural finance” started to be implemented in Nepal, they targeted small farmers, intended as the household head, normally a man. After the introduction of the Grameen Model in the early 1980s, microfinance initiatives started to target women. Programs were elaborated with an instrumentalist approach to female targeting: women were chosen because of their better repayment rates and because they spent more for the wellbeing of the whole household, especially the children, compared to men. A large part of microfinance programs had women’s empowerment listed in their aims because it was considered important for donors, but it hasn’t been prioritised as a paradigm for microfinance projects. In fact, ideological barriers to a transformatory approach to gender relations persist. Nepali society is also very hierarchical and stratified: differences among women related to caste, ethnicity, age and position in the family can overestimate the potential of groups to enhance solidarity among women. Despite this, researches conducted in Nepal showed that microfinance programs, especially when integrated with other activities such as literacy classes and trainings, can improve the status of women.

Far-west Nepal is the poorest region of the country and the one with the lowest HDI, especially in hills and mountains among excluded groups and women. The Far-Western Region is the one with the lowest number of financial institutions and gender and caste-based discrimination are still strong and tolerated. Measuring women’s empowerment is always controversial and difficult. The attempt is to capture both the individual dimension of empowerment and the collective one. We launched a research about the impact of microfinance on women’s empowerment jointly with Tribhuvan University of Kathmandu (NP), the University of Cape Town (SA) and the University of Trento (IT).

The fieldwork was conducted by giving a questionnaire to 300 women living in municipalities where microfinance institutions (MFIs) operate and 300 women living in municipalities without MFIs (control group). Propensity score matching (PSM) technique was applied to identify matches between municipalities with MFIs and without MFIs. Data for the matching come from the Nepal Census 2011. The questionnaire was developed together with Prof. Bharat Thapa who helped make the questions relevant and fitting the specific context. The results of this research confirmed the evidences founded in other studies conducted in Nepal about microfinance and women’s empowerment according to which microfinance has a positive impact on the lives of women.

Women in the municipalities where MFIs operate are more comfortable in speaking with strangers and officials, showing a greater level of self-confidence in relating with people outside their network of family and friends. Concerning decision making within the household, the majority of women take decisions together with their husband, but women in the municipalities where MFIs operate are more likely to take family related decisions (education of the children, household expenses, acquisition of durable assets) on their own. More importantly, those women are more likely to take their own decision over goods and assets that they own. Where MFIs are present, women are more likely to feel respected in the community. Nevertheless, levels of intra-household emotional violence remain very high, with no statistically significant difference between treated and control group. Moreover, no significant difference is found with respect to women’s behaviour during menstruation: in both groups, around 30% of women declared to not follow the tradition of Chhaupadi. Concerning their social life, women both among treated and non-treated municipalities, tend to participate in family and social gathering, MFIs clients tended to visit relatives and friends more often and to be part also of other groups, such as mother groups. As far as politics is concerned, women are actively voting at elections (more than 80% of women reported to have voted during last election in both samples). Women in the municipalities where MFIs operate display higher interest in politics, and they are also more likely to actively participate in the national/local government and political meetings.

Microfinance can be an effective tool for enhancing women’s empowerment: this case study shows that women who lived in districts served by microfinance institutions had a greater self-confidence, more autonomy in decision making within the family and felt more respected in the community. They had greater mobility and more social relationships and were more interested and active in politics. Therefore, microfinance can be a good entry point for a more comprehensive process that leads to an improvement in women’ status. Despite this, discriminatory and harmful practices have not been eradicated. Microfinance can’t provide a solution to all causes of discrimination against women, comprehensive strategies aimed to promote substantive equality are needed. Given the trend in prioritising an instrumentalist approach to female targeting in the Nepali microfinance sector, it is reasonable to think that there is still room for improvement by exploiting more the time spent in groups by women to conduct awareness raising activities about gender equality and women’s rights. Integrating the provision of financial services with other activities related to awareness about gender equality and women’s rights would improve not only financial inclusion but rather social inclusion in a wider sense. A transformative approach would enhance women’s empowerment more effectively.