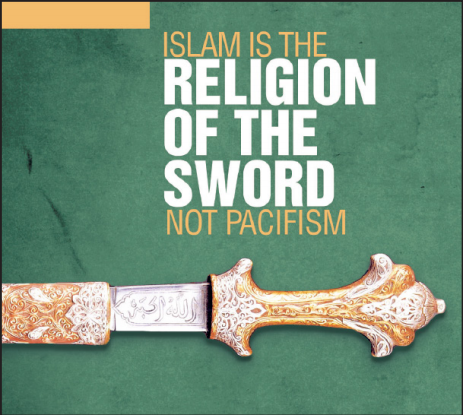 Terrorism, Propaganda and Human Rights in the Islamic State

Sheila Compagnucci, holds a master's degree in Human Rights and Multi-level Governance & International Relations obtained in the framework of the double degree programme established between the Universities of Padova and Wroclaw. This In Focus article is excerpt from her master thesis discussed, in July 2019, under the supervision of prof. Paolo De Stefani.

The origins of this organization can be traced back to late 1990s and early 2000s in the Middle East, when anti-Western and anti-United States tensions were running high in the aforementioned region. The organization, with al-Zarqawi’s leadership, was born in Afghanistan in 1999, as a small group under Al-Qaeda’s wing; however, the purposes of expansionism and creation of a caliphate were made possible only from 2011 onwards with the new leader, Al-Bagdadi. Indeed, after ending the relationship with Al-Qaeda, the Caliphate was self-proclaimed on June 29th 2014, with the specific “lasting and expanding” modus operandi aimed at the State-building process of a worldwide ummah (like-minded Muslim-people community) based on the rigid interpretation of Shari’a Law.
ISIS represents historically the first financially-independent terrorist organization which has controlled vast areas in both Iraq and Syria and the most worldwide threatening and powerful group infamous for brutal executions, enemies seizures and barbaric destructions of heritage sites.
Analyzing how the Islamic State has been able to develop from an embryonic form, as a small group, under Al-Qaeda’s wing, to a challenging terrorist organization – as a self-proclaimed State owning a worldwide-spread ideology, wide territories in Syria and Iraq, and an army of thousands of fighters, sympathizers and supporters – is pivotal to understand why ISIS is considered different from any other existing armed terrorist group.
Why ISIS is recognized as a new threat? Three main revolutionary reasons are to be taken into consideration: firstly, ISIS was born in the late 1990s under Al-Qaeda’s protectorate and only in few years it has become a self-proclaimed Caliphate, able to organize a State-like system, with Departments, Councils and law enforcement agencies, and (most importantly) provided with an army ready to fight for its common cause; secondly, the unique usage of internet and, in particular, social media at its disposal has supported and fostered an intense international propaganda, processes of radicalization and recruitment, coordination of activities and attacks on a global scale, and the combination of ISIS’ crimes with sporadic attacks perpetrated by lone wolves; thirdly, as a consequence of the first two points, the organization has raised a great amount of new challenges at the international and national level.

The role of social media in ISIS' propaganda

ISIS’ expansionist goal was developed in the field, with conquest of territories, and in the digital world, with the creation of a virtual caliphate through investments in the media and propaganda sectors: sharing contents online and spreading ideology/images of the Islamic State as a good Muslim nation have encouraged the organization to develop online recruitment campaigns over masses, reach a wider global audience, attract people willing to actively support the Caliphate, radicalize like-minded people, deter enemies, exert pressure and threaten governments and societies, and catch media attention and news coverage. Through a pro-ISIS propaganda, the group is employing updated means of communication and attractive contents, targeting and manipulating global publics and addressing an audience who is living mainly in the West, in order to win hearts and minds of people and declare the group’s defensive nature aimed at protecting Muslim people from oppression. 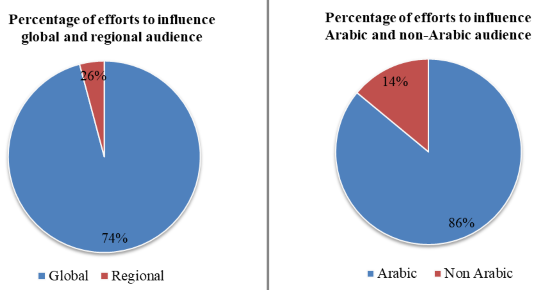 Graph 1: Percentage of efforts employed by the organization to influence global and regional audiences.

The uninterrupted presence of ISIS in global media and in news coverage has allowed the group to achieve a great notoriety within few years in the international arena: the use of social media is nowadays both a means and a goal for terrorist groups. Internet has turned out to be an ally for terrorist organizations, which aim at mainly five general goals – such as research and communication, training, fundraising, media operations, and radicalization and recruitment.

The use of specific channels of content delivery and languages – ISIS is employing, besides Arabic and English, other 28 languages in order to communicate with a wider audience – and convincing, inclusive and fact-based stories is the key to catch the audience’s attention. The organization is targeting multiple audiences, according to their vulnerabilities (motivation, demographics, and psychographics), focusing on their needs, beliefs and concerns: the main target is vulnerable young people or, generally, people who are looking for a sense of belonging, inclusiveness, meaningful life, identity, and purpose. For this reason, some ISIS’ messages are describing and promising a violent State where people can express their vindictive feelings, live a meaningful life and belong to a society.
Among ISIS’ contents, an example of message – the group’s core one – is included and expressed in its name. The name – decided by the terrorist organization – embodies simultaneously the Islamic State’s identity and principal goals. The acronyms of ISIS in English and DAESH in Arabic have the same meaning: establishing a legitimate State where all “true” Muslims can be represented and protected. In fact, honouring and celebrating worldwide the importance and the diversity of Muslim people – compared to Western societies – are at the core of the Caliphate’s narratives: the creation of the Islamic kingdom is meant to the release and triumph of the ummah – previously and still currently disdained and attacked by enemies and infidels, according to ISIS’ narratives.
In the communication strategy planning, ISIS’ goals are planned to stimulate support, unite jihadist fighters in the battle against the enemies, frighten internal and external opponents and try to communicate with the broadest audience about the legitimacy and effectiveness of the Islamic State. 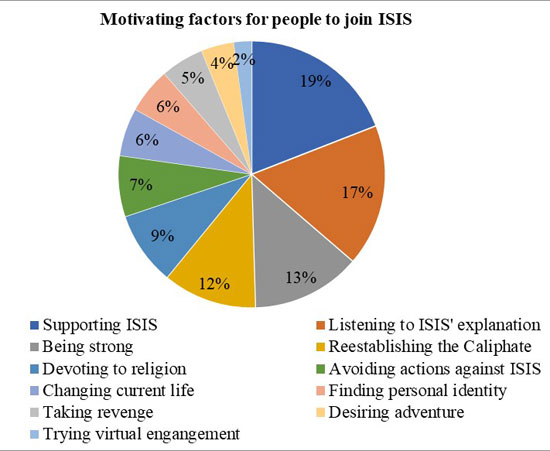 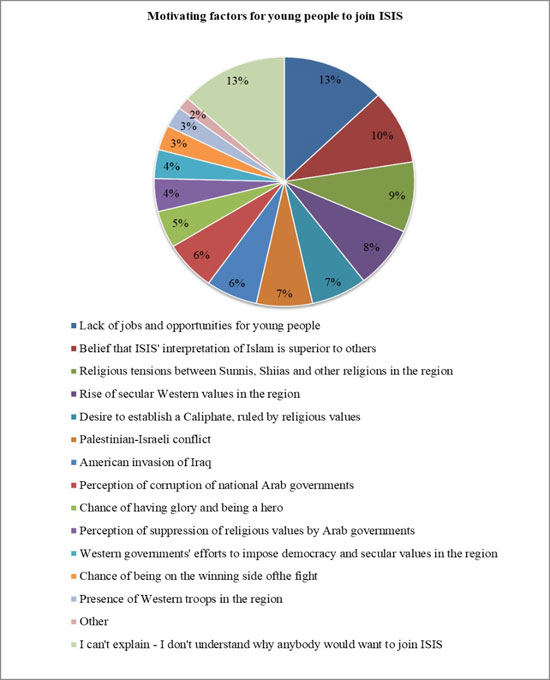 Easy access, deep web, Western format, catchy titles make the online contents attractive to the audience. The Islamic State is employing different online platforms, forums and materials: leaders’ audio statements (speeches made directly by the highest representatives of the group), nasheeds (Islamic chants), websites and online magazines (YouTube, Dabiq, Rumiyah), news reports (Amaq News Agency), videos and images, and applications (Twitter, Telegram, Facebook, Instagram, Tumblr) are aimed at creating an online community composed by ISIS English-language symphatizers, mentioned as “Baqiya family”. The difficulty to measure and limit ISIS’ online presence (due to the inefficiency of online filter mechanisms), branding, massive distribution and agenda-setting in the online versatile domain constitutes the advantage of being active on social media. Online platforms have allowed the Islamic State to represent and be represented by a global movement. 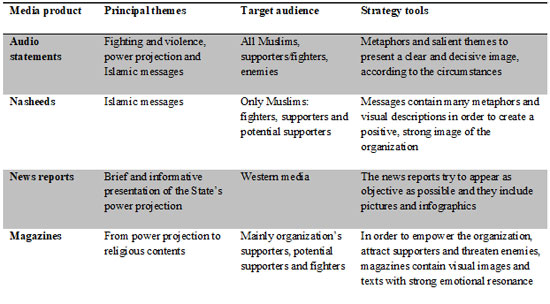 As a consequence of the rapid and challenging evolution of the organization, associated to its ability to distinguish itself from any other terrorist group for its history, organizational and political structure and employment of propaganda and media for recruitment campaigns, the Islamic State is considered one of the biggest challenges of the twenty-first century: through the spread of fear, terror and traumas among people – directly and indirectly involved in attacks – the Caliphate has succeeded in undermining physical safety and psychological/mental stability, causing issues locally – within societies and governments – and internationally – within the international community – for the indefinite amount of violations of human rights, which have been classified by the International Criminal Court as genocide, crimes against humanity and war crimes.
Indeed, ISIS represents a sui generis organization with a peculiar political and organizational system and online recruitment campaigns. The Caliphate has managed to have a great direct effect on people’s everyday lives: in this way, the Islamic State is presenting challenges at the international level for the protection of people’s rights and at the local level for the formulation of adequate counter-terrorism measures and the creation of societal phenomena undermining the integration of societies.
As a result, the range and the consequences of ISIS’ operations have reached a new extent and negative greatness. Terrorist operations and lone-wolves attacks have been combined in order to spread fear within societies: unfortunately, fear is not the only consequence worldwide. Besides spreading terror (the main goal of terrorist organizations), the Islamic State has been able to target other aspects at the foundations of communities: ISIS has succeeded in violating people’s fundamental human rights and freedoms while accomplishing deadly attacks. This great impact on human rights has been rarely experienced before: the range of this impact and the amount of violations committed by the organization in less than six years is easily understandable by examining each article of the Universal Declaration of Human Rights – which embodies the fundamental standards of people’s human rights.
At the international level, many issues have arisen in the prosecution of ISIS members and their crimes, however, no solution has been achieved yet, and thus the situation is still undefined under the International Law. Some problems are linked to the prosecution and extradition of ISIS members due to incongruence of national laws or lack of legal background. Other issues are connected to the United Nations Conventions on the topic of terrorism: they are sectoral and do not include every aspect of terrorist attacks, moreover, they are signed by few members States and create obligations only on them. In the International Human Rights Law’s framework, both States and non-state actors are duty-bearers, however, there are not proper mechanisms to hold ISIS accountable; indeed, a right to remedy exists, unfortunately, no reference to the author of the violated crime is made. In the International Criminal Law’s context, the main issue derives from the Law itself which has no jurisdiction on armed groups and does not take into consideration collective identities: the Law has competence only on States which ratify the Rome Statute, and both Iraq and Syria – which are the Islamic State’s territorial headquarters – are not members. In the International Humanitarian Law’s framework, problems are several, starting from the definition and nature of Non International Armed Conflicts (NIAC), to the status of NIAC prisoners of wars and civilians, to NIAC definition of direct participation to hostility, and to the different obligations in a NIAC for States (complying with all 4 Geneva Conventions) and non-state groups (complying only with Common art. 3 of Geneva Conventions). Furthermore, in both International Humanitarian Law and Criminal Law there is no right to remedy for victims of violations committed by armed groups; the right to remedy exists only for violations perpetrated by States.
Whereas, at the local level, governments are attempting, firstly, to find solutions to the precarious and suspicious climate among individuals who are living day by day, with the fear that new attacks are being organized and that any Muslim person may be a potential terrorist (phenomenon of islamophobia) and, secondly, to adopt proper counter-terrorism strategies – aimed at tackling the problem of terrorism without posing any further limitation to citizens’ rights and freedoms.
In conclusion, in the national environment, States are mobilizing to target the topic of terrorism with specific Acts or Laws to stop the commitment of attacks, however, the international community is charged of prosecuting ISIS members: the International Law should adequately take legal action against jihadists for their serious crimes and fill the gap of provisions, creating an adequate normative background for the accountability of ISIS, binding non-state groups with obligations. Nevertheless, the three main international regimes violated by the organization (International Human Rights Law, International Humanitarian Law and International Criminal Law) are not legally able to conduct proper trials and to issue judgments towards non-state actors, such as ISIS.
Therefore, unfortunately, currently, the International Law is not equipped to face the threat represented by the Islamic State. However, the organization’s latest territorial defeats may represent a sign of decline in power and number of fighters and, thus, this situation – while the Caliphate is recovering political, physical and online strength – could give to the international community the time needed to plan further measures and solutions for more efficient legal actions against ISIS members.