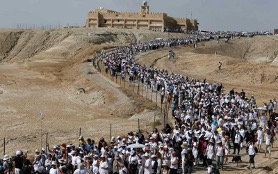 The Resistance from Within: Rethinking the Role of Women in the Contest of the Arab-Israeli Conflict

Giulia Martini holds a master’s degree in Human Rights and Multi-level Governance from the University of Padova. This in Focus article is an excerpt from her master thesis discussed, in October 2020, under the supervision of Prof. Pietro De Perini.

The Middle East is characterised by one of the most lasting conflicts between identities (which history and politics have brought to conflict) that the contemporary world knows, that between Israelis and Palestinians, between the state of Israel and the state in statu nascendi of Palestine, two peoples which fight to control the same land.

The long Arab-Israeli conflict of which it seems impossible to imagine a peace has caused, among the numerous violence, a deterioration in the condition of women. In fact, in this complex context women, belonging to two completely different realities - that of the oppressed and that of the oppressors -, represent the most vulnerable actors. A situation which, according to a report published by the United Nations Entity for Gender Equality and the Empowerment of Women has had a direct impact on the lack of gender equality: women are victims of military occupation by Israel, an unstable policy in Palestine and a general patriarchal context.

The history of women’s movements in Israel and Palestine is undeniably anchored in the history of a conflict that has troubled the Middle East for more than sixty years. While the prolonged conflict has had a negative impact on all parties involved, it has particularly affected women. Repeated cycles of tension, wars and conflicts marginalise women and cause multiple gender abuse cases in daily life, root physical, economic, social and political insecurity, and reduce democratic values of freedom, equity and mutual tolerance. Women have been systematically relegated to the margins of conflict. However, despite the difficult climate, women’s civil society has over the years assumed an increasingly important role in the peaceful struggle for the recognition of fundamental rights, including active participation in the political life of the country. The conflict, in fact, became an opportunity for women’s empowerment due to changes in their traditional roles and new responsibilities that they must assume. Women activists have demonstrated their ability, strength and determination to become active participants of the struggle, as well as motivating people from different backgrounds and different political opinions to join in their actions.

At the international level, some important steps forward in recognition of women’s rights, such as the resolution 1325 (2000), which addresses the impact of war on women and the importance of women’s full and equal participation in conflict resolution, have produced significant political commitments to women’s human rights and equality. Women in Palestine and Israel become aware of their opportunities and start to try more consistently to acquire a new role within civil societies.

The first Intifada “Uprising”(1987-1993), which represents the first major concrete Palestinian mass mobilisation, is considered the real turning point in the history of women’s movements, because the process of resistance of women’s organisation against the occupation has shaken and exposed Palestinian society from within, resulting in the process of a dynamic revaluation of tradition social, economic and political structures. Several feminist associations developed with the desire, expressed by some activists, to catch the opportunity offered by this unprecedented mobilisation to promote women’s liberation. In the course of this involvement, women learned crucial skills, which prompted them to challenge the exclusion of women from the official decision-making levels in the political arena. The Intifada lead to the emergence of numerous female peace groups that took many initiatives inspired by this new wave of solidarity and feminism. For the first time, Palestinian and Israeli women engaged in a series of international peace conferences. 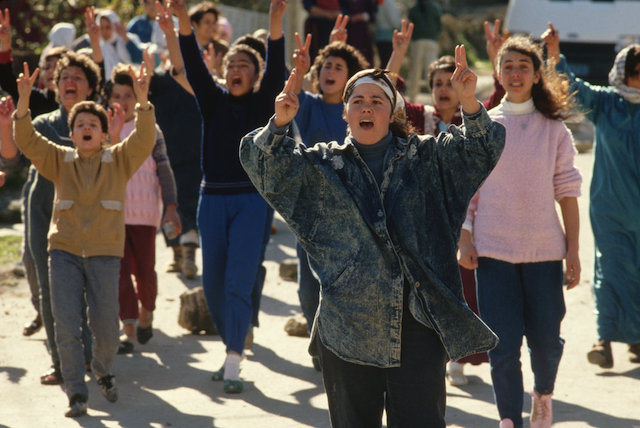 Despite the escalation of the political conflict, women on both sides of the Palestinian-Israeli divide have made considerable gains. Through their activism, many women have grown more confident, have developed feminist consciousness and an overarching political perspective. As a result, these women now constitute a critical mass that is likely to continue to impact the course of the conflict and shape its aftermath. In addition, by exposing the gendered dimensions of the conflict and bringing this analysis into the media and popular culture, women activists have begun to transform the cultures of their respective collectivities, trying to ensure gender equality.

Arab and Israeli women’s civil society, starting from that moment on, have tried for the first time to cooperate and to create a meeting point. They have established a dialogue and tried to obtain recognition at a representative political level.

These joint projects by women carried out the following activities:

While women continue to try to demonstrate to the entire world that they are an active member of the society, in which their contribution is fundamental and despite the great potential of these organisations that decide to work together to end the conflict in the name of women’s rights, women’s movements in this extremely complicated context have to face several challenges. At the same time, challenges can represent an obstacle to the cooperation between Israeli and Palestinian women’s movements and organisations resulting in the end of the initiatives between Palestinian-Arab women and Israeli-Jewish women.

In other words, even if the conflict represents an opportunity for changing the role of women, it does not always translate into actual change. In many post-conflict scenarios, once men return from conflict, they want to go back to the previous status quo, and women tend to go back to their previous roles as mothers, wives and home keepers.

The following challenges represent the major causes of the failure of women’s movements and the consequent unsuccessful active participation of women’s movement in the management of the conflict and to their strategic cooperation:

While it is possible to reflect on future developments, as things stand today, the situation of Palestinian and Israeli women’s movements appears much less than favourable. The current political context in Israel and Palestine does not seem to offer moments of real openness to negotiation with the other. It seems that the new dynamics of the conflict, illustrated among other things by the increasingly militarised context, the Palestinian patriarchal society and the depressed economic situation have not only served to marginalise the rights of women from the national agenda, but also to limit the reach and influence of civil society as a whole.

Despite a wave of optimism regarding those activities and initiatives carried out by years in which the reality of joint activism in Israel and Palestine emerged, as a fragmented phenomenon, but which seemed to face a unitary trajectory, driven by the desire to build peace, what emerges is that starting from the new millennium, such joint and non-joint movements between Israeli and Palestinian women were really weak and not effective.

The experience of joint activism between Palestinian and Israeli women’s movements shows that civil society can flourish and generate change if it is able to respond to the needs of the population and therefore have a solid social base, to evolve with the context in which it operates and whether it is capable of seizing social, economic and political opportunities to promote peace and human rights.

Several existing women’s movements in Palestine and Israel continue to stand for the recognition of their rights and continue to work and employ numerous efforts, although these do not always translate into concrete changes for society.

“I want to continue focusing on women, and the role we can play in bringing people back together. I want to see younger women playing an even bigger role in society. Our struggle is not over”,