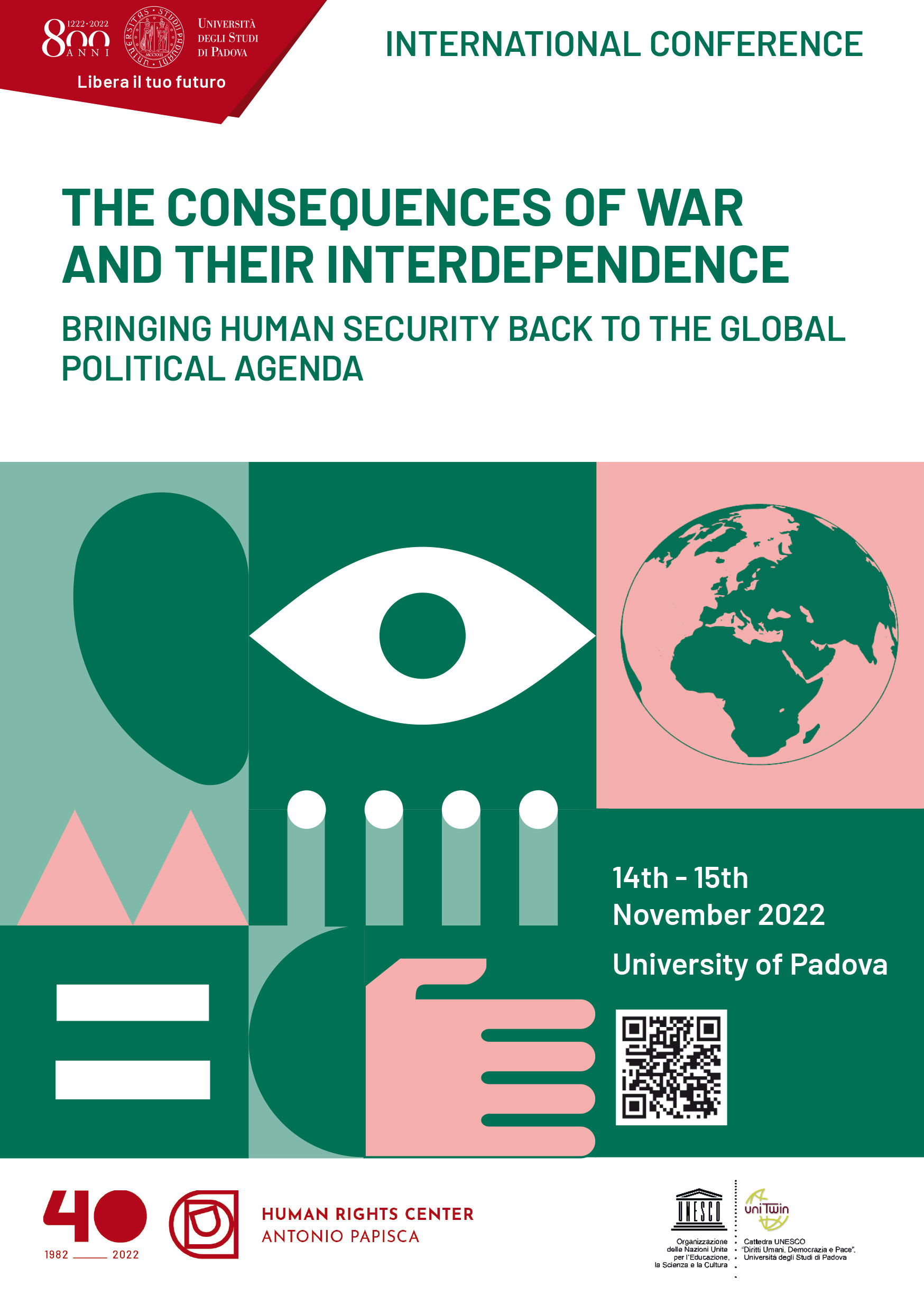 Within the Conference's challenging conceptual and empirical framework the Human Rights Centre “Antonio Papisca” and the UNESCO Chair “Human Rights, Democracy and Peace” of the of the University of Padova have launched, in tight cooperation with other international human rights research institutes a call for papers open to human rights scholars, researchers as well as Ph.D candidates.

Preference will be given to sound proposals which contribute addressing, from different disciplinary perspectives the following topics (see detailed topic descriptions, below the "Dates and Instructions" section).

The conference is however open to other relevant human-security related topics that have been left out from the proposed topics.

Dates and instructions
To participate in the call for papers, please fill the form by 30th September 2022 (midnight) at the following link: https://forms.gle/6yy4txC63dwmWUFK8

You will be asked to provide an abstract of maximum 250 words, information about authors, up to 4 key-words and a reference to one of the conference’s panel topics.
Notification of acceptance will be sent by 12th October.
For accepted abstracts, the submission of a working paper before the Conference is strongly encouraged. This will also help preparing the manuscript for the publication opportunities provided in the context of this event.

Migration: Bringing human security back to the agenda

Panel proposed and managed by Lisa Heschl and Gerd Oberleitner, University of Graz

In the last decades, migration has been approached from a state centric rather than a human security perspective. The closure of borders and their fortification, the cooperation with third countries in order to reduce numbers of people arriving and notorious push-back practices are symbolic for the security driven approach to migration predominant in the political field in Europe and beyond. However, such an approach ignores migration realities, the drivers for migration and the complexities of risks associated with migration.

With the war in Ukraine European states experienced for the first time since the 90s what Lebanon and Jordan saw in the first months of the war in Syria, namely that neighboring countries are most affected by forced displacement. First reactions to offer protection to Ukrainian refugees where overwhelmingly positive and welcoming, showing the possibilities of a more human centered and unified approach in the field of migration.

Using the Ukrainian war as a starting point this panel seeks to address challenges, shortcomings and gaps in forced migration responses and the way how huge displacement crises have been differently dealt with at the international and regional level. We invite scholars to contribute to the discussion whether the war in Ukraine could actually be tipping point for refugee protection allowing for a more human centred and human rights-based approach to forced displacement. Yet, being aware of the specific circumstances of the Ukrainian forced displacement, we also invite contributions addressing the need to rethinking migration and forced displacement responses in the broader context of conflicts and wars. This might include contributions on migration related to conflict induced food insecurities or forced migration because of climate change driven conflicts over resources such as water and land.

Contributions from all academic disciplines and multidisciplinary contributions are welcomed.

The environmental consequences of war

Panel proposed and managed by Damien Short, University of London

This panel will interrogate the connection between war, conflict, structural violence and the ecological crisis. In particular, we will seek to identify the key political, economic, social and cultural drivers of ecological destruction and explore their consequences. Papers that identify potential pathways out of such local, national and international crises are also encouraged.

The consequences of war on the rights of minorities

Panel proposed and managed by Corinne Lennox, University of London

The consequences of war on accountability for international crimes

Any war is premised on an act of aggression and entails the breach of international humanitarian law. Modern conflicts are inseparable from the mobilisation and 'weaponisation' of any segment of the socio- economic fabric of a state. Hence, mass atrocities, persecutions, and other conditions can be met for the commission of crimes against humanity and genocide. The war in Ukraine has unleashed neo-colonial (rather than post-colonial) ambitions and grand geopolitical designs looming on the destiny of nations and peoples, and Russian leaders have even evoked the ghost of nuclear war. Criminal prosecutions are a tool to respond to these challenges. Ukraine and Russia, as well as other countries and the EU, have mobilised resources to investigate war crimes and crimes against humanity allegedly committed in the framework of the conflict, and dozens of states have triggered the ICC mechanism. However, national criminal courts are not immune from political manipulation and the ICC has structural and functional limits in addressing the full range of potential international crimes committed in the conflict. Proposals have been advanced to establish an ad hoc international tribunal; however, the risk of "weaponising" international criminal law and deepening the chasm between European and non-European situations has also been voiced.

The panel may address, among others, the following questions: How has the Ukrainian case impacted the global movement for international law accountability and against impunity? How have the doctrine and practice of universal jurisdiction evolved in recent years? Can the new mechanisms created by the EU, the UN, and other organisations to conduct investigations and fight against impunity for war crimes in Ukraine change the scenario? What do we know about the war crimes trials celebrated in Ukraine, Russia, and other states in conflict? What are the prospects of establishing an ad hoc tribunal for Ukraine to address, among others, the crime of aggression? How are 'new' investigative methods, including those based on open source intelligence techniques, contributing to the prosecutions of international crimes?

Post war Europe? The consequences of the war in Ukraine for the European Union/Europe

The aim of this panel is to analyze the consequences of the war in Ukraine on the relations between EU states. We are seeking to find an answer to the question to what extent diplomacy, foreign policy based on humanitarian diplomacy, peace diplomacy, respecting human rights can be still effective in foreign policies of EU states. Proposed topics in this panel:

International Conference "The Consequences of War and their Interdependence. Bringing Human Security Back to the Global Political Agenda", University of Padova, 14-15 November 2022, depliant (pdf, 585.06 Kb , EN)