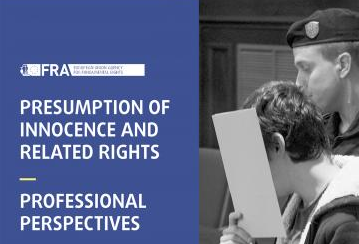 The research is based on interviews with 123 defence lawyers, judges, prosecutors, police officers and journalists in the nine EU Member States (Austria, Belgium, Bulgaria, Cyprus, Germany, Italy, Lithuania, Poland and Portugal), examining the practical implementation of the presumption of innocence in criminal proceedings, and related rights in these countries. The findings indicate that, although the conduct of criminal proceedings appears, on the whole, to be well regulated in national law in the nine Member States studied, problems in implementing safeguards persist.

As for Italy, the report outlines a series of peculiarities. First, the right to be presumed innocent is at risk when cases are connected to the Mafia. Defendants involved in such cases tend to be considered guilty and the presumption of innocence is weakened considerably. Second, women who are victims of gender-based violence – despite being victims – are always affected by prejudices and exposed to secondary victimisation, both outside the courtroom, in their social context, and during the proceedings. The Italian media generally reinforce gender stereotypes when reporting gender-based violence cases. Third, there is also an issue with ethnic diversity: all judges in Italy are white, which may have an impact on the presumption of innocence of a black defendant. Fourth, as in some other EU member states, the systemic imbalance between the defence and the prosecution in Italy continues to persist. The requests from the prosecution on evidence are often treated more preferably than those from the defence. Finally, the report presented a good practice introduced in Italy by a reform in 2014, which recognises that defendants have the right and not the obligation to be present at the trial. In their absence, the proceedings shall be suspended. Unfortunately, with the notable exception of Italy, trial in absentia is allowed in all Member States studied.

The report brings the findings to the attention of the Member States and the EU institutions and can support their efforts in assessing the implementation of Directive (EU) 2016/343.