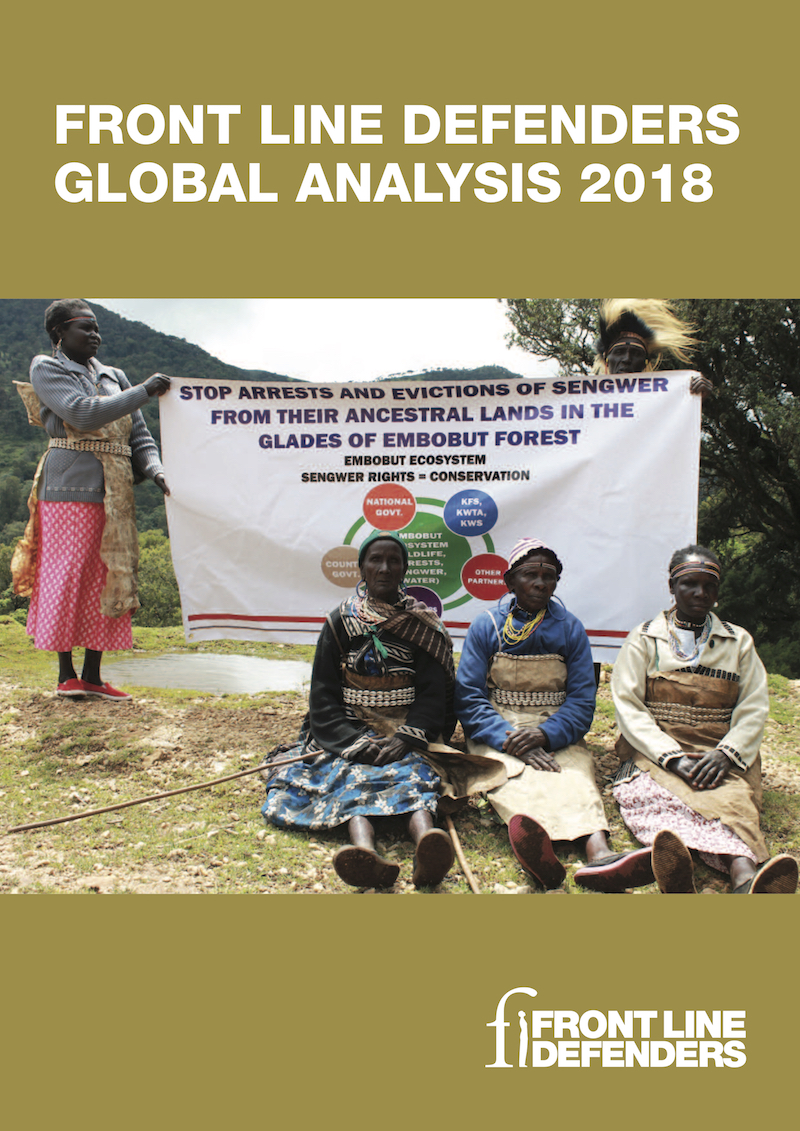 Front Line Defenders: the Global Analysis on the situation of Human Rights Defenders in 2018 has been published

Front Line Defenders has published the 2018 Global Analysis which details the physical assaults, defamation campaigns, digital security threats, judicial harassment, and gendered attacks faced by human rights defenders (HRDs) and women human rights defenders (WHRDs). 2018 marked the 20th Anniversary of the HRD Declaration and the 70th Anniversary of the Universal Declaration of Human Rights, but HRDs around the world continue to face lethal threats from state, non-state, and corporate actors in their peaceful struggles for rights.

In 2018, 321 defenders in 27 countries were targeted and killed for their work – the highest number ever on record – according to data collected by Front Line Defenders. More than three-quarters of these, 77% of the total number of activists killed, were defending land, environmental or indigenous peoples’ rights, often in the context of extractive industries and state-aligned mega-projects.

Front Line Defenders reports that the murders of HRDs were not isolated events, but were preceded by judicial harassment, threats and physical attacks. At least 49% of those killed had previously received a specific death threat, and in an additional 43% of killings there had been general threats made to HRDs in the area. In the vast majority of cases, HRDs did not receive the necessary protection and support from state authorities from the time they reported threats to the time they were murdered.

According to the Front Line Defenders Global Analysis 2018, in addition to the threats experienced by male colleagues, WHRDs face gendered and sexualized attacks from both state and non-state actors, as well as from within their own human rights movements. Such violations include removal from public or high-ranking positions in NGOs, trade unions, and political societies; smear campaigns questioning their commitment to their families; sexual assault and rape; militarized violence; and the harassment and targeting of their children.

In addition to physical attacks and torture, the Front Line Defenders Global Analysis 2018 highlights the continuing trend towards restrictive legislation aimed at stifling the powerful work of HRDs and WHRDs.

Front Line Defenders Digital Protection Team responded to a high number of reports from Brazil, Egypt, Guatemala, Honduras, Iraq, Mexico, Nicaragua and Venezuela in 2018. According to the Global Analysis, authorities around the world frequently used phone and email surveillance to target LGBTI+ defenders, WHRDs and environmental activists in particular. The report notes that in Tanzania, Pakistan, Russia, Malaysia, Nicaragua, Turkey, and many countries in MENA (Middle East and North Africa), governments claimed that HRDs were threatening “national security” as an excuse for censoring and blocking NGO websites.

Front Line Defenders is an organisation founded in 2001 with the specific aim of protecting human rights defenders at risk, people who work, non-violently, for any or all of the rights enshrined in the Universal Declaration of Human Rights.

The full version of the Global Analysis 2018 is available at the link below.