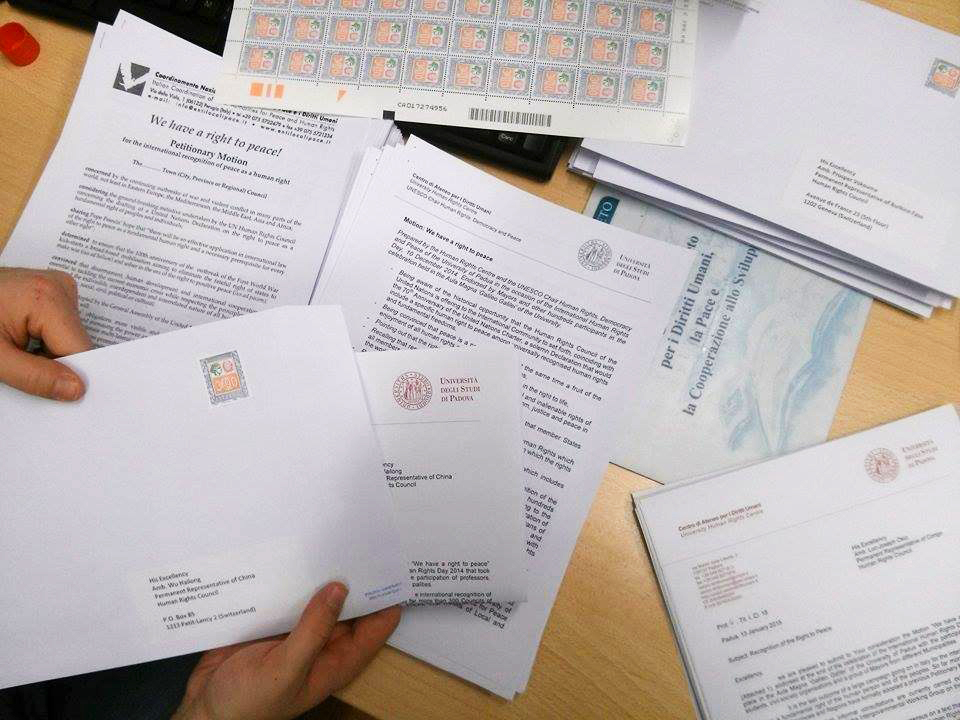 Human Rights Council: Informal consultations of the Working Group on a draft United Nations Declaration on the Right to Peace, Geneva, 30 January 2015

Human Rights Council resolution 27/17 of 25 September 2014 requested the Chairperson-Rapporteur of the Working Group on a draft United Nations Declaration on the Right to Peace to conduct informal consultations before the third session of the Working Group, which is scheduled to take place from 20 to 24 April 2015.

In this connection, the Chairperson-Rapporteur wishes to invite Members States and non-governmental organizations in consultative status with the UN Economic and Social Council to participate in an informal consultation on Friday 30 January 2015, at the Palais des Nations, in Geneva.

The Motion urges the United Nations Human Rights Council to ensure that its Intergovernmental Working Group on the Right to Peace will:

- Fully comply with the mandate conferred by the Human Rights Council in order to finalise the text of a Declaration which recognises peace as a fundamental right of the human person and of the peoples;

- Transpose in the final Declaration the text of article 1 of the draft prepared by the Advisory Committee:“1. Individuals and peoples have a right to peace. This right shall be implemented without any distinction or discrimination for reasons of race, descent, national, ethnic or social origin, colour, gender, sexual orientation, age, language, religion or belief, political or other opinion, economic situation or heritage, diverse physical or mental functionality, civil status, birth or any other condition. 2. States, severally and jointly, or as part of multilateral organizations, are the principal duty-holders of the right to peace. 3. The right to peace is universal, indivisible, interdependent and interrelated. 4. States shall abide by the legal obligation to renounce the use or threat of use of force in international relations. 5. All States, in accordance with the principles of the Charter of the United Nations, shall use peaceful means to settle any dispute to which they are parties. 6. All States shall promote the establishment, maintenance and strengthening of international peace in an international system based on respect for the principles enshrined in the Charter and the promotion of all human rights and fundamental freedoms, including the right to development and the right of peoples to selfdetermination”;

- Express the principle that war as such is a crime against humanity;

In Italy, the petitionary motion - promoted by the National Coordinating Body of Local Authorities for Peace and Human Rights, by the Human Rights Centre and the UNESCO Chair "Human Rights, Democracy and Peace" of the University of Padua- in support of a UN Declaration for the international recognition of the human right to peace continues to be widely adopted by Italian Municipalities and Provinces, which refer to the so called “peace and human rights norm” contained in their Statutes. Significantly, also four Regional Councils have approved the same petitionary motion: Marche, Veneto, Emilia Romagna, Friuli Venezia Giulia. To date, almost 300 petitionary motions on the human right to peace have been adopted.