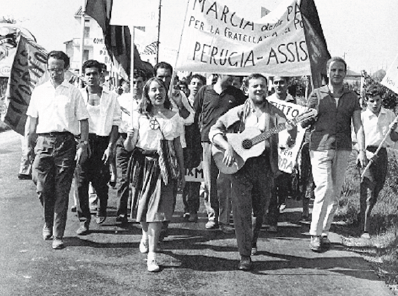 Italy: the March "Perugia-Assisi" for peace and brotherhood among peoples celebrates its 50th anniversary

This year, on Sunday 25th September it will take place the Perugia-Assisi March for peace and brotherhood among peoples which celebrates its 50th anniversary. The first March took place on 24th September 1961 and it was organised by Aldo Capitini, the leading Italian theorist of nonviolence, known as the "Italian Gandhi".

The 24 kilometres March from Perugia to Assisi is the occasion for sharing ideas, proposals and thoughts inspired by the seven constitutional principles of nonviolence, justice, freedom, peace, human rights, accountability and hope which are the conceptual basis of the event.

This year, the March is the climax of the Year for Values started on 21st September 2010 with the beginning of the National Programme of peace and human rights education 2010-2011 "My school for peace". Schools, students and teachers will be the protagonists of this March, committed in building an education system that promotes the value of citizenship and the Constitution, as well as peace and human rights, interculture, equity, and environmental protection.

The Meeting "1000 young for peace" will be held before the March on 23rd and 24th September and it will be focus on Peace, work and future. A thousand young people, committed in promoting the values of nonviolence, justice, freedom and human rights, will have the opportunity to share their ideas, hopes, concerns, experiences and proposals.

The Meeting and the March are promoted by the Italian national coordination of local authorities for peace and human rights, the Peace Roundtable and numerous organisations, associations and local authorities.