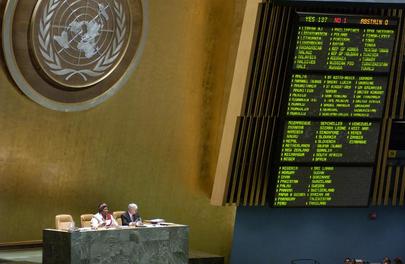 Making history in the United Nations: the General Assembly adopts a Declaration on the Right to peace promoted by civil society organizations

On 19 December 2016, the plenary of the UN General Assembly (UNGA) ratified by a majority of its Member States the Declaration on the Right to Peace as previously adopted by the UNGA Third Committee on 18 November 2016 in New York and the Human Rights Council (HRC) on 1 July 2016 in Geneva. This Declaration was presented by the delegation of Cuba with the support of many other delegations and some civil society organizations.

Along the inclusive and transparent negotiation process of the Declaration, conducted by the Chairperson-Rapporteur of the Open Ended Working Group (OEWG) on the right to peace Ambassador Christian Guillermet-Fernández of Costa Rica, all delegations and some civil society organizations actively participated in the three consecutive sessions of the OEWG in Geneva (2013-2015).

Thanks to this consensual approach, a majority of Member States supported the Declaration on the Right to Peace, which is the clear result of a complex and difficult negotiation process. This positive approach was elaborated in light of the following elements: firstly, international law and human rights law; secondly, the mandate of the HRC in the field of human rights and thirdly, the human rights elements elaborated by the resolutions on the right of peoples to peace adopted by the HRC in the past years.

As indicated by a Group of Western States within the Third Committee, the Declaration has some value because it develops the New Agenda 2030 and also reinforces the three UN pillars - peace and security, development and human rights-. Also they pointed out that the Preamble of the Declaration additionally contains many elements that will benefit for the clarity and greater balance in order to ensure and to represent the full range of views among memberships.

In the adoption of the Declaration on the Right to Peace by the Third Committee and the plenary of the UNGA, the mobilization and strong voice of some civil society organizations was properly heard in its 71st session, when they openly called on Member States to take a step forward by adopting a declaration that can be meaningful for generations to come.

The UNESCO Chair on Human Rights, Democracy and Peace at the University of Padova (Italy) in a legal study about the Declaration adopted by the HRC concluded in November 2016 that «the conjunction of Article 1 with the very title of the Declaration presupposes that a human right to peace does already exist as implicitly proclaimed by Article 28 of the Universal Declaration of Human Rights: “Everyone is entitled to a social and international order in which the rights and freedoms set forth in this Declaration can be fully realized”.

An important group of civil society organizations, led by the International Association of Democratic Lawyers (IADL), Comunità Papa Giovanni XXIII (APG23) and the UN Network of United Network of Young Peacebuilders (UNOY), stressed in an Open Letter addressed to the diplomatic community of November 2016 that: “in today's world, devastated by armed conflicts, hate and poverty, the recognition and declaration by an overwhelming majority of states that “Everyone has the right to enjoy peace”, would send to Humanity, and in particular to young and future generations, a very much needed message of peace and hope …. The adoption of the UN Declaration on the Right to Peace will represent a little step forward toward the fulfilment of the solemn promises we made in 1945”. This letter was supported by some 60 NGO with UN-ECOSOC Status and well-known peace and human rights activists.

In parallel, the Chairperson of the Drafting Group on the right to peace at the Advisory Committee (AC) of the HRC, Ms. Mona Zulficar, and the Chairperson-Rapporteur of the OEWG at the HRC, Ambassador Christian Guillermet-Fernández, published in the Arab newspaper Elaph in December 2016 a reflection in which they stressed that the OEWG witnessed that the text presented by the AC was not properly supported by Member States. For this reason, the Chairperson-Rapporteur decided to promote the effective implementation of the Declaration and Programme of Action on a Culture of Peace, taking into account that all the main elements on the right to peace identified by the AC had been elaborated in the Programmes of Action on Vienna and Culture of Peace.

It is strongly desirable for the promotion of peace worldwide to strengthen the positive trend on this matter already initiated by Cuba within the UN Commission on Human Rights in 2002 and after developed at the HRC in 2006. In particular, some Latin American, African and Asian States, which currently support the right to peace, abstained on this topic in both the Commission and the HRC. However, after many years of intensive work by different stakeholders, at present all the Latin American, the African and most of the Asian States positively support this notion. In addition, it should be taken into account that currently an important number of Western States abstained for the first time ever in the General Assembly.

In order to strengthen the positive trend and to move towards a more consensual and inclusive approach, the legislator desired to stress the idea that everyone has the right and is entitled to enjoy and access the benefits stemmed from peace, human rights and development, founding pillars of the whole UN system. Denying this access to the three pillars is to deny the same existence of the United Nations.

The three UN pillars have been recognized by the HRC as a fundamental element aimed to promoting the right of peoples to peace. In particular, resolutions 11/4 of 2009, 14/3 of 2010 and 17/16 of 2011 on the right to peace have constantly stressed these pillars in its operative sections. In this line, the resolution 60/251 of the HRC adopted by the General Assembly on 15 March 2006 recognized in its preambular paragraph 6 that “peace and security, development and human rights are the pillars of the United Nations system and the foundations for collective security and well-being, and recognizing that development, peace and security and human rights are interlinked and mutually reinforcing.”

In 1996, the General Assembly recognized by consensus in its resolution Resolution 48/126 the human rights approach of the right to in peace. In particular, art. 1.4 of the UNESCO Declaration of the Principles of Tolerance states that “human beings, naturally diverse in their appearance, situation, speech, behaviour and values, have the right to live in peace and to be as they are”.

And as indicated by Oscar Arias, Nobel Peace Prize Laureate and former President of Costa Rica, “Peace is a never ending process... It cannot ignore our differences or overlook our common interests. It requires us to work and live together”.