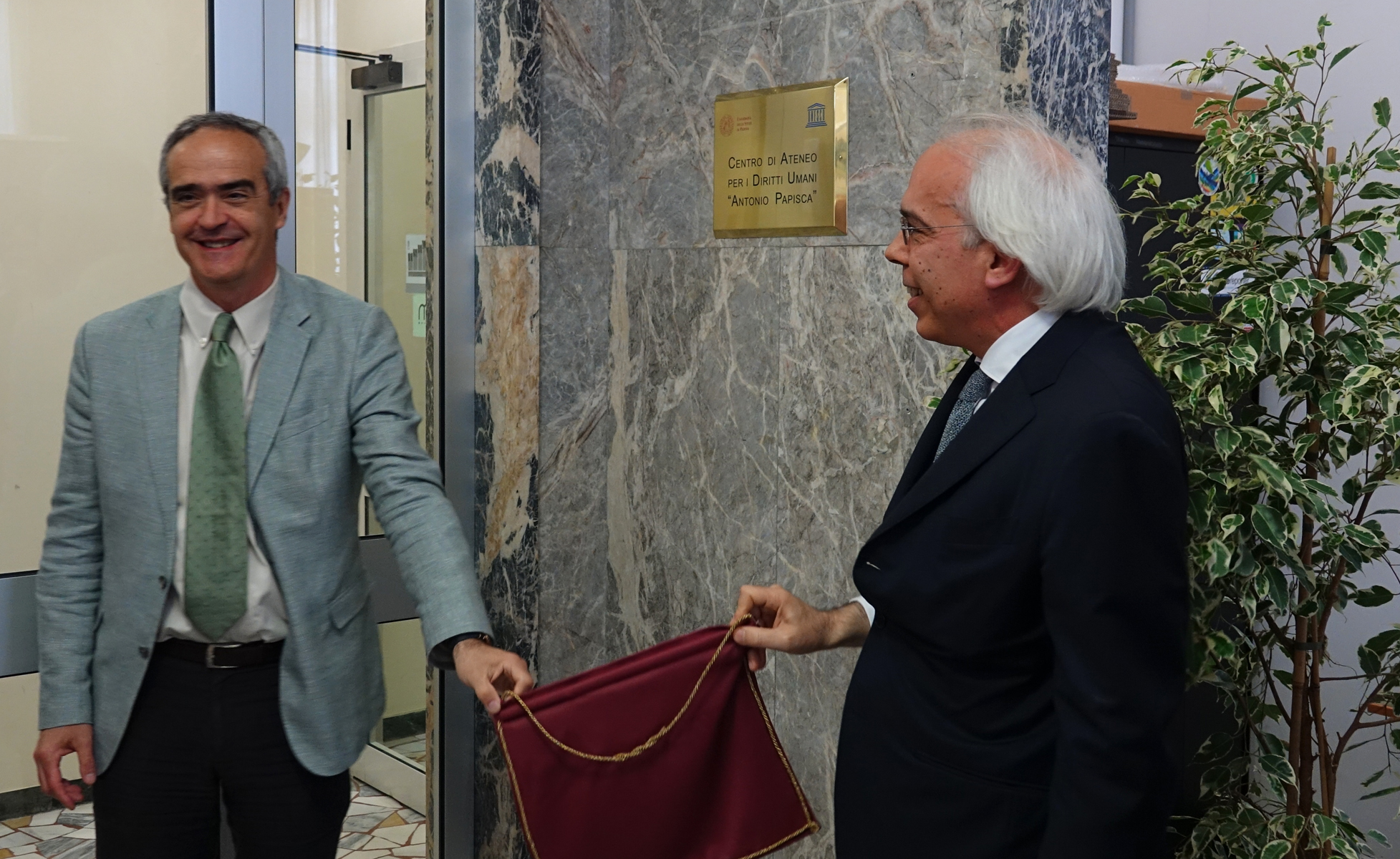 On 16 and 17 May the Human Rights Centre “Antonio Papisca” commemorated Antonio Papisca one year after his passing with two initiatives.

On Wednesday 16 May 2018, at 11.30 am, at the Human Rights Centre of the University of Padova, a ceremony took place to unveil a new plaque of the Centre called “Antonio Papisca” in honor of the professor. The ceremony was attended by: the Magnificent Rector, professor Rosario Rizzuto, the Director of the Centre, professor Marco Mascia, the Director of the Department of Political Science, Law and International Studies, professor Elena Pariotti, the President of the School of Economics and Political Science, professor Arrigo Opocher, the members of the Steering Council of the Centre, professors, students and the technical and administrative staff of the University of Padova. Professor Papisca’ s wife and sons Luca, Marco and Chiara were also present.

The change of the name of the Human Rights Centre into University Human Rights Centre “Antonio Papisca” was proposed by the Steering Council of the Centre and it has been approved by Rectoral Decree with the prior approval by the Commission Departments and Centres, the Consultative body of the Department Directors, the Academic Senate and the Board of Administration of the University of Padova.

Rosario Rizzuto, Magnificent Rector of the University of Padova
“It is a great pleasure to be here. Let’s start with a sad moment because Antonio has passed away, we don’t forget it, and we miss him.

But if we are here today and we unveil the plaque, it means that we are still continuing his work, because what he daily taught, the capability to bring the thought to have an impact on society, is a value which strongly demonstrates the patavina libertas which is the part of our motto we are very proud of. It is a patavina libertas which has to be realized every day, defending and elaborating the thought.

A journalist asked me before whether human rights are the same all over the world, yes, they are the same all over the world. A value of the human being is to promote human rights, it is one of the commitment that the societies that think to be open and evolved must take. And they have different ways to do it. One way you can certainly imagine is to expand their own model by force. But we believe that the world has to be coherent with human rights so the way is that of culture, thought, in depth analysis, conviction. And I believe that who knew Antonio knows that this was his identity, depth of thought, gentleness. And this is what make this model of promoting human rights almost invincible.

Today, putting another small sign of our gratitude we are showing once again what our university has done over the centuries. I state that the red thread running through eight centuries of history is the idea that culture and science are based on freedom, freedom of experiment, freedom of living. But it is a freedom who has to engage all citizens. I think this was Antonio’s message. He strongly promoted it and launched it everywhere. When I was at the European Parliament to present our university, from nanotechnologies to astrophysics, someone mentioned me Antonio and told me “we know you well because there is Antonio Papisca”.

Today we remember him, but we remember that everything he built in the field of human rights is a common heritage who has to persist because this is the commitment he has started. Thank to Marco and to the University Human Rights Centre. Marco took the responsibility with great passion and great capacity, so that what Antonio has realized still continue to be a strength of our university.”