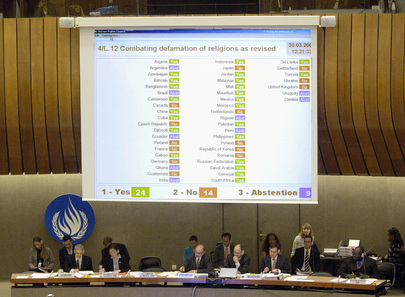 The January 29 2013 session of the Universal Periodic Review (UPR), which was to be devoted to the review of Israel before the Working Group of the Human Rights Council, has been suspended for failure to appear of the State’s delegation. This is the first time since the creation of UPR that a State withdraws from the discussion, which is intended to collect recommendations from other Member States of the United Nations to improve the respect for human rights in the country in question. The Human Rights Council decided (A/HRC/OM/7/L.1) to reschedule the UPR of Israel in October 2013 (during the 17th session) at the latest.

On 14 May 2012, the Permanent Representative of Israel to the United Nations had communicated the decision of his Government of suspending cooperation with the Human Rights Council, in particular, as a result of the adoption of resolution 19/17 which established a fact-finding mission on Israeli settlements in the occupied Palestinian territories. Among other things, the decision of non-cooperation with the Council has meant that Israel did not submit to the Working Group of the UPR its second report on human rights. (The first was discussed in December 2008: see the Documents related at https://www.upr-info.org/-Israel-.html). The review of human rights in Israel would have taken place therefore not only without the representatives of the State, but also in the absence of the national report.

Under these conditions, the Human Rights Council has preferred to not carry out a review. The issue of non-cooperation of Israel will be discussed within its next ordinary session. On that occasion it will also be decided whether to consider the behavior of Israel a case of "persistent non-cooperation" with the UPR mechanism (see HRC article 38 of resolution 5/1), assessment from which may result sanctions of diplomatic nature. The Israeli Government has requested on January 10, 2013, a postponement of its review, which was regarded as form of residual intention to cooperate.

Israel's conduct creates a dangerous precedent for the functioning of UPR mechanism. The value of UPR is largely based on its universal character and the fact that no State, though it may be considered embarrassing or inappropriate to undergo to the scrutiny of other Governments, usually withdraws from this exercise of transparency. The risk is that the example of Israel can be followed by other States.