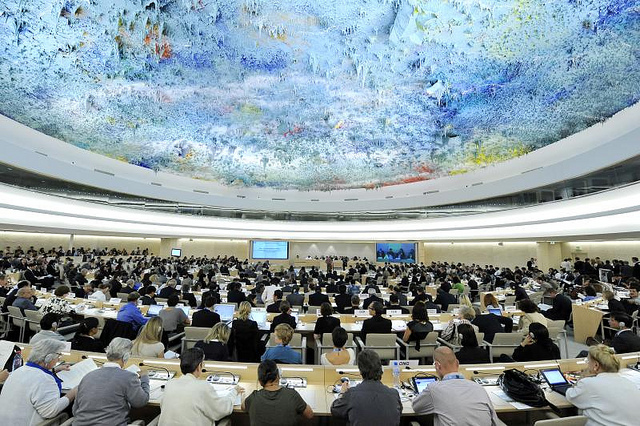 The 27th session of the UN Human Rights Council (HRC) commenced its work at the Palais des Nations in Geneva on September 8, 2014.

During its 3-week session the Council analysed the report of the newly appointed UN High Commissioner for Human Rights, Mr. ZeidRa’ad AlHussein, on the work of his Office, presentations of 19 Human Rights Council Special procedures mandate holders, including the report of the Commission of Inquiry on Syria and on the situation in Ukraine. Moreover, a number of panel discussions on a variety of pressing human rights issues, as well as thematic meetings on the rights of indigenous peoples and a gender perspective in the UN human rights agenda will be held.

General debates on the human rights situations that require the Council’s attention are scheduled in relation to the Occupied Palestinian Territory and Iraq. Both situations had been at the core of two recent HRC special sessions held on July 23 and September 1, respectively.

The Council will also adopt the outcomes reports of the Universal Periodic Review of 14 countries examined in April - May this year. As a result of the session, which will last until September 26, 2014, the HRC will take action on a number of resolutions and decisions.

On September 10, the Human Rights Council has convened the panel discussion on the protection of the human rights of persons deprived of their liberty. During the panel discussion, the Italian delegation took the floor to reaffirm that the question of persons deprived of liberty had been at the core of national debate with the aim of identifying tools to alleviate overcrowding. Italy also asked about the use of broad amnesty and pardon as tools to counterpart overcrowding in prisons.

Note by the Secretary-General to the agenda for the twenty-seventh session of the Human Rights Council (pdf, 174.87 Kb , EN)