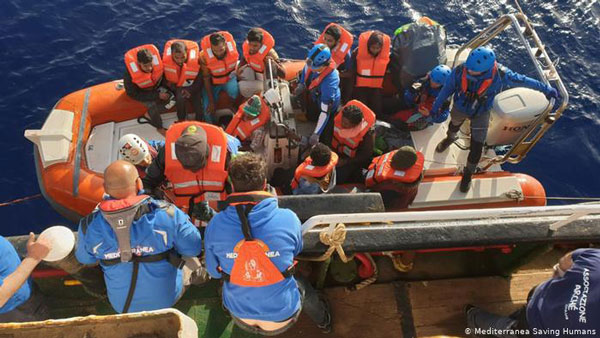 “The right to life and the principle of non-refoulement should always prevail over national legislation or other measures purportedly adopted in the name of national security,” said the independent experts, who conveyed their concerns about the decree in a formal letter to the Italian Government.

“We urge authorities to stop endangering the lives of migrants, including asylum seekers and victims of trafficking in persons, by invoking the fight against traffickers. This approach is misleading and is not in line with both general international law and international human rights law. Instead, restrictive migration policies contribute to exacerbating migrants’ vulnerabilities and only serve to increase trafficking in persons.”

Earlier this month, Mr. Salvini announced a proposal to issue a decree that would fine vessels for every person rescued at sea and taken to Italian territory. NGO and other boats that rescued migrants could also have their licences revoked or suspended.

The UN experts said that, should the decree – yet to be approved by the government – enter into force, it would seriously undermine the human rights of migrants, including asylum seekers, as well as victims of torture, of trafficking in persons and of other serious human rights abuses.

They also asked for the withdrawal of two previous Directives banning NGO vessels rescuing migrants off Libya’s coasts from accessing Italian ports. In particular, the second Directive singled out the Italian ship Mare Jonio for helping those at sea.

Declaring that Libyan ports were “able to provide migrants with adequate logistical and medical assistance” was particularly alarming, the experts said, especially given reports that Libyan coastguards had committed multiple human rights violations, including collusion with traffickers’ networks and deliberately sinking boats.

The experts said any measure against humanitarian actors should be halted. “We are deeply concerned about the accusations brought against the Mare Jonio vessel, which have not been confirmed by any competent judicial authority. We believe that this represents yet another political attempt to criminalise humanitarian actors delivering life-saving services that are indispensable to protect humans’ lives and dignity.”

The UN experts said Italian authorities had failed to properly consider several international norms, such as article 98 of the UN Convention on the Law of the Sea, on the duty to help any person in danger at sea. “Article 98 is considered customary law. It applies to all maritime zones and to all persons in distress, without discrimination, as well as to all ships, including private and NGO vessels under a State flag,” they said.

The Directives stigmatize migrants as “possible terrorists, traffickers and smugglers”, without providing evidence, the experts said. “We are concerned that this type of rhetoric will further increase the climate of hatred and xenophobia, as previously highlighted in another letter to which the Italian Government is also yet to reply.”

The experts have contacted the Government about their concerns and await a reply. A copy of the letter has also been shared with Libya and the European Union.

The full version of the letter sent to the Italian Government by the UN independent experts is available at the link below.