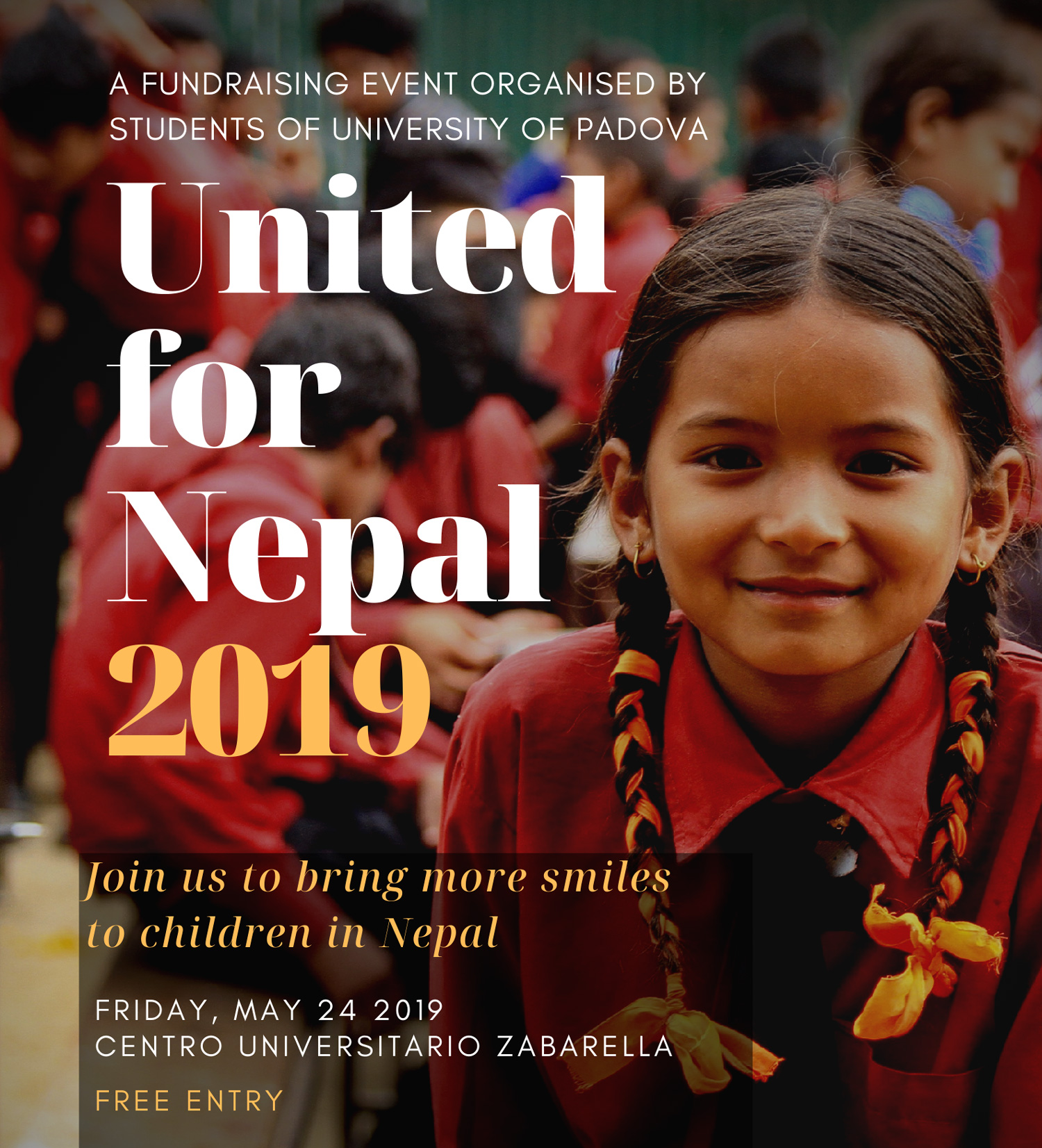 Recently the 2019 edition of the fundraising campaign United for Nepal has been launched by the students of the MA Programme in Human Rights and Multi-level Governance of the University of Padova. The targeted amount of this year’s campaign is 3,000 EUR which will be allocated for two schools in Terai and Sindhupalchok. While the former is the poorest region in Nepal, the latter was struck the most severely by the historic earthquake in 2015. Specifically, the proceedings are planned to be spent of the upgrading work of classrooms, the purchase of educational materials, and the extension of the internet connection.

This year, a fundraising event will take place at Centro Universitario Zabarella in Padova, on the 24th May, 2019, welcoming everyone to participate. Especially, the whole part of the event in the afternoon will be dedicated to children, with workshops, games, and educational activities on environmental sustainability issues. Towards evening, there will be space devoted to cultural deepening, with a photographic exhibition accompanied by a more festive and convivial "aperitivo" moment with live music. The event is not only a place where participants can make voluntary donations to United for Nepal, but it is also a moment of social gathering and raising awareness on Nepalese cultural settings as well as sustainable development issues.

Paralleling with the fundraising event, an online crowdfunding campaign has been launched on gofundme.com and will be run from May to September. Students will directly deliver the donations raised from the campaign to the site in Nepal in October, during the programme Winter School “Microfinance in Action” promoted by the University of Padua.

In its 2018 edition, thanks to the donations received, United for Nepal was able to: i) buy uniforms for children of the schools in Terai; ii) provide three sewing machines to rural women in Terai; iii) deliver stationery to students in Sindhupalchok; and iv) grant the budget needed for the annual extension of the internet connection in Sindhupalchok.

Based on the reflection on and the evaluation of United for Nepal’s outcomes from previous years, the initiative has strived to help children and women in rural areas through providing educational stationery and facilities to schools as well as microfinance funds to local women groups. This correspond to Goal 4 “Quality Education” and Goal 10 “Reduced Inequality” of the United Nation’s Sustainable Development Goals.

Big changes usually come from small steps, which are made by more and more people joining hands together./.
For further details and updated information on the activities and the progress of the campaign you can follow United for Nepal on social media:

More on the United for Nepal project

The project began in 2015, after a devastating earthquake in Nepal that ruined an entire country: thousands of people were killed, 95% of buildings and 60% of health centres were destroyed, especially in the Sindhupalchok region. United for Nepal was initiated in order to provide a direct help to the victims of the disaster. From this time onwards, goals of the projects have been annually reviewed and evaluated to promote social inclusion for disadvantaged groups such as women and children in rural areas.
More on the Sustainable Development Festival

United for Nepal is officially part of the Sustainable Development Festival: a cultural and political awareness initiative spread throughout the national territory of Italy. The Festival responds to the ever-increasing need to raise awareness and involve ever wider segments of the population on issues of economic, social and environmental sustainability, so that not only professionals can promote cultural change and new individual and collective behaviours.

United for Nepal is organized within the Sustainable Development Festival 2019 edition, with the collaboration of the Human Rights Centre "Antonio Papisca" - University of Padova and the Alleanza Italiana per lo Sviluppo Sostenibile ASVIS