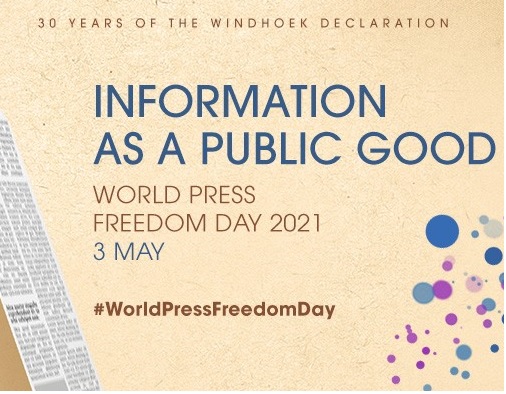 World Press Freedom Day, celebrated on May 3, was proclaimed by the UN General Assembly in December 1993, following the recommendation of UNESCO's General Conference.

On the occasion of the World Press Freedom Day, the Platform for the Protection of Journalism and the Safety of Journalists of the Council of Europe released its Annual Report 2021 -- “Wanted! Real action for media freedom in Europe”. The report lists 201 serious cases of threats to media freedom in the 47 Council of Europe member states in 2020, a 40% increase compared to 2019. A record number of alerts concerned physical attacks (52 cases) and harassment or intimidation (70 cases).

According to the Council of Europe, during the COVID-19 pandemic, there was a strong rise in reports of violence against journalists as well as censorship and reprisals for questioning governments’ policies. At the same time, quality media face serious economic challenges, and many journalists have lost their jobs due to the pandemic.

As for Italy, although according to the UNESCO observatory, there were no recorded killings of journalists in Italy in 2006-2021, the World Press Freedom Index of Reporters Without Borders (RSF) states that about 20 Italian journalists are currently receiving round-the-clock police protection because of the intimidation, death threats and attacks to which they have been subjected, above all by criminal organisations and mafia networks. The level of violence against reporters keeps on growing, especially in Rome and the surrounding region and in the south. On the whole, the Italian media have been able to keep working freely during the pandemic despite the difficulties of access to data due to the restriction measures, in particular the Cura Italia decree of 17 March 2020 According to the same report, the main problem for Italian journalists has been the coronavirus denialists – a motley array that includes urban guerrillas, “no mask” activists, neo-fascists, hooligans, “anarchists” and organised crime infiltrators – who often threatened and physically attacked reporters, especially those covering the wave of protests in October and November 2020.

Annual Report to Promote the Protection of Journalism and Safety of Journalists 2021 (pdf, 2.05 MB , EN)